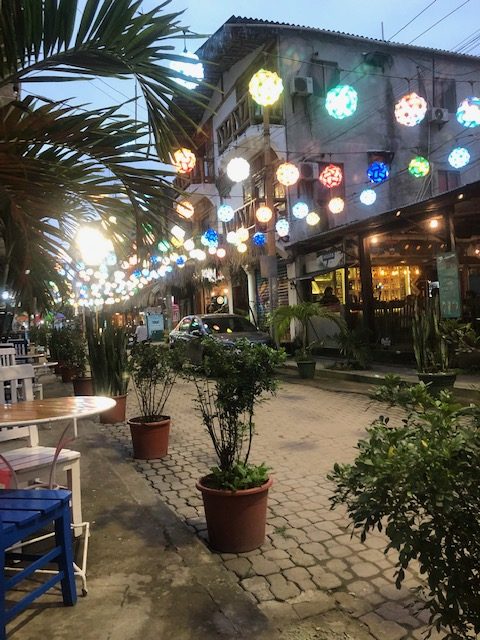 After spending a couple days in Guayaquil, I was off to a little hippie surf town called Montañita where I was going to spend the majority of my vacation.  I had originally planned on going by bus.

Long haul Latin American buses are usually fairly comfortable and the bus fares are really cheap.  The I started thinking about Covid-19 and the fact that I really didn’t want to spend four hours in a crowded bus during the pandemic.  Taxis are cheap (gasoline prices down there are a little over $2.00 a gallon).  I reconsidered my plans and took a private taxi for the three hour drive instead. 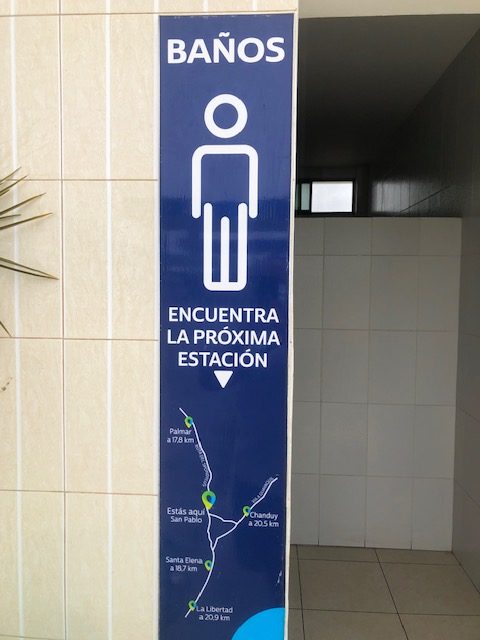 In Ecuador, the bathrooms at gas stations all have maps showing how close you are to your next public bathroom. I think it’s a great idea.

As I mentioned in the last installment, I had only been to Montañita once.  For a town with fewer than 4000 residents, it was really hopping during my previous visit.  Lots of surfers and tourists from across the planet in full-on party mode.  I had a really good time. 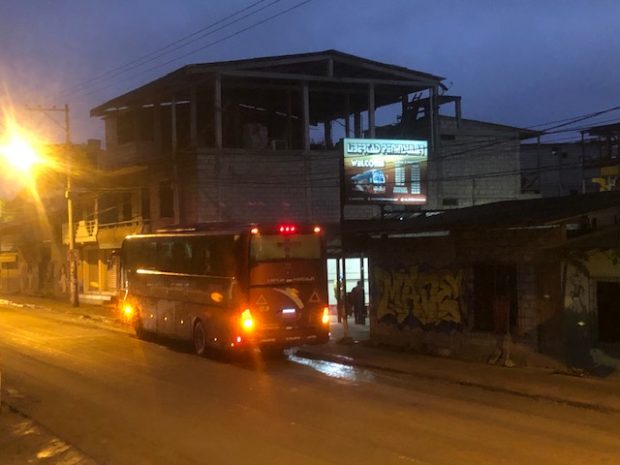 I think I made a good call on taking a taxi. This is the town bus station. I wish you could envision the muddy sidewalks, the smell of open sewage, and the packs of wild dogs in the area.
But the bus fare from Guayaquil was only $3.45!

As the taxi pulled up to the hotel where I was staying, I was shocked to see that the entire city was a ghost town.  Almost no one was out in the street.  I had booked a nice hotel on a cliff overlooking the city and the beach, just a short walk from all the bars, restaurants and parties.   It was a beautiful property.  I was the sole guest.  I literally had the entire hotel to myself. 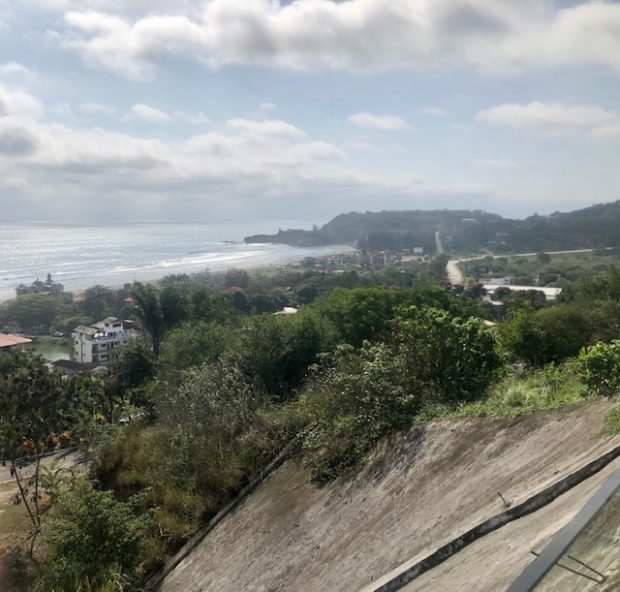 The desk clerk told me that with Covid-19 raging, few international tourists were as interested in traveling.  That fact completely wrecked the town’s economy.  He told me that the city got busier during the weekends when wealthy Ecuadorians come to the beach to play and party.  It was mid-week.  The town was completely dead.  It was a stunning contrast to my last visit. 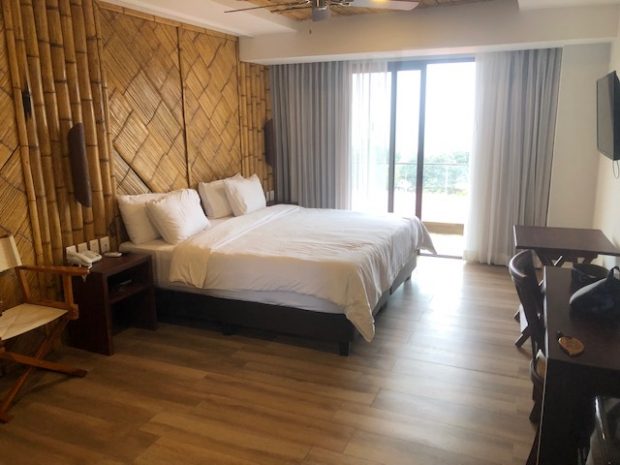 High class living in rural Ecuador. My room was very nice, but this is one of the top five most expensive places in town. In a town full of hippies and surfers, there isn’t high demand for luxury.

I decided to go for a walk through town.  It was late afternoon on a Wednesday.  It’s a small town.  I walked all the major streets checking out the lay of the land and what was going on.  The walk took a little less than two hours to see the entire town.  I counted tourists I passed as I walked along.  The last time I was in Montañita, that would have been impossible.  There were thousands.  Not anymore.  I counted a grand total of  exactly 11 obvious Gringo tourists during the entirety of my walk.

Montañita is very different from Guayaquil in both culture and attitude.  Montañita was filled with independent thinkers, vagabonds, and surf bums.  Most people were not well off financially, especially since the pandemic began and the tourist numbers plummeted.  I did not see a single cop on patrol in the town during my stay there. In Guayaquil, I encountered cops every few minutes as I walked along the streets.  Zero cops in Montañita. 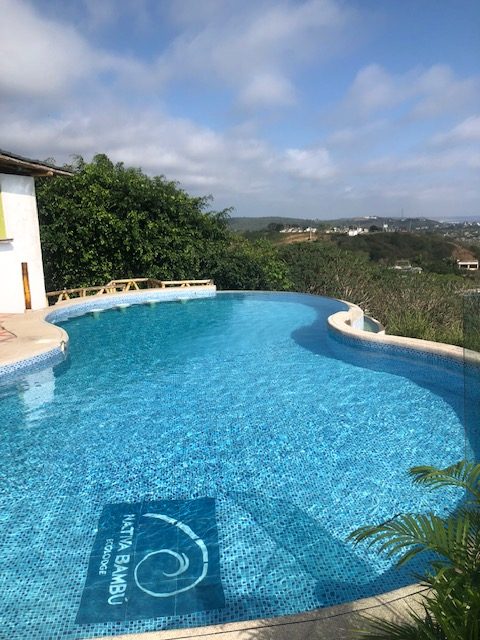 Even though Montañita had the same legal mask mandate as Guayaquil, in practice very few people in Montañita wore masks outside in public places.  Mask compliance dropped from around 95% in Guayaquil to probably closer than 20% in Montañita.  It was a noticeable difference.  No masks on the beach.  Only a few people wearing masks on the street.  Almost everyone carried masks and would don them when boarding public transportation or going inside, but the folks outside weren’t wearing them.

Besides the difference in mask wearing, the other difference was the widespread public drug use in Montañita.  Personal use quantities of marijuana are legal to possess in Ecuador.  I didn’t smell weed ever in Guayaquil.  In Montañita, lots of folks openly smoked in the street.  The odor of burning cannabis was never more than a few steps away.  On my walk, three different dudes offered to sell me cocaine.  It was a completely unique ecosystem.

The locals were hit hard by the pandemic.  Eighteen months without the tourists upon which their personal economy is based put a lot of folks in poor financial straits.  About half of the hostels were closed.  Maybe one third of the restaurants were shuttered.  The Spanish schools were all closed down.  No one was hawking surf lessons on the street.  The money was gone. 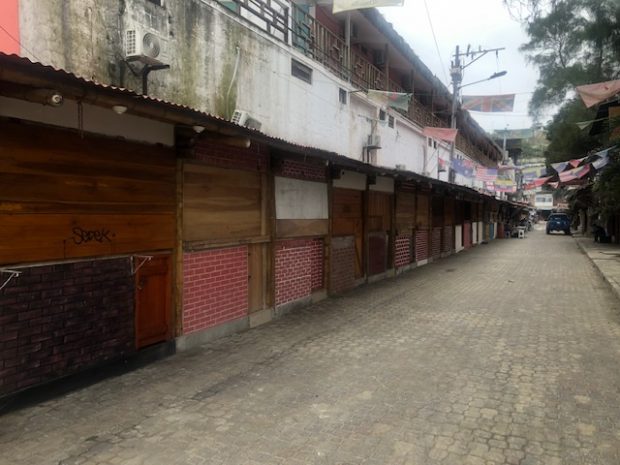 Each of these windows is a separate take away restaurant. None of them opened during my stay. Five years ago, this street would have been packed with thousands of people during dinner time.

Perhaps the most telling indicators of the problematic economy was the number of signs like the one below that translates into “showers for rent.”  Lots of locals were living in concrete block wall structures without roofs, electricity, or running water.  Businesses like this provided places for locals and tourists to take a cheap shower if their houses or accommodations lacked running water. 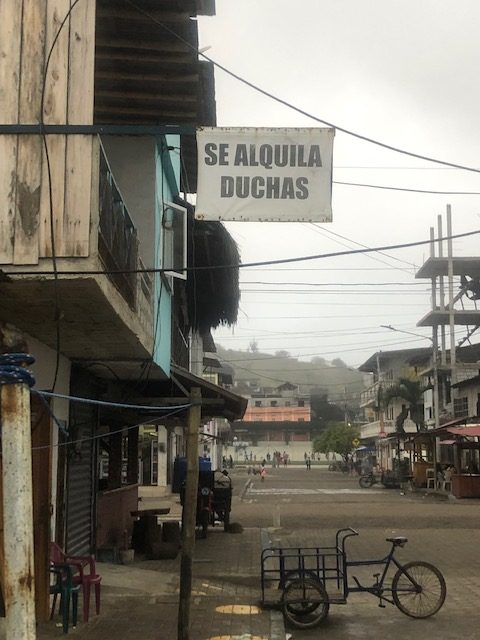 Well, so much for taking Spanish lessons and surfing.  The town was deserted.  I was going to get a lot of my book writing done.

I quickly settled into a routine.  I would wake and eat a large late breakfast at the hotel.  I would write for my websites and post on social media for a couple hours.  After that, I would go for a 60-90 minute walk on the beach.  Back to the room.  Work on the book for a few hours until I got hungry for dinner.  Walk into town and eat.  Come back home and work on the book until I fell asleep. 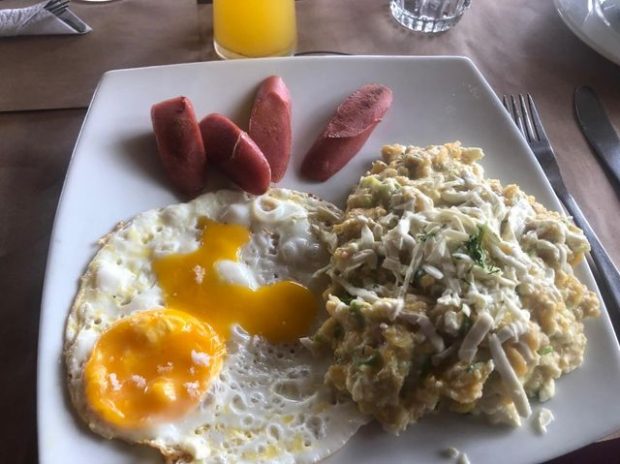 With breakfasts like this, I didn’t need to eat lunch.
This one was called El Tigrillo. The only description was “ traditional Ecuadorian breakfast.”
Not disappointed. The mess on the right is hash browns mixed with onion, peppers, chorizo, and cheese.
Washed down with passion fruit juice and coffee.  It cost $6.50.

It wasn’t really a vacation, but it was a pleasant diversion of scenery and it allowed me to get a lot of my next book finished.  I enjoyed the hard work and the somewhat Spartan lifestyle. 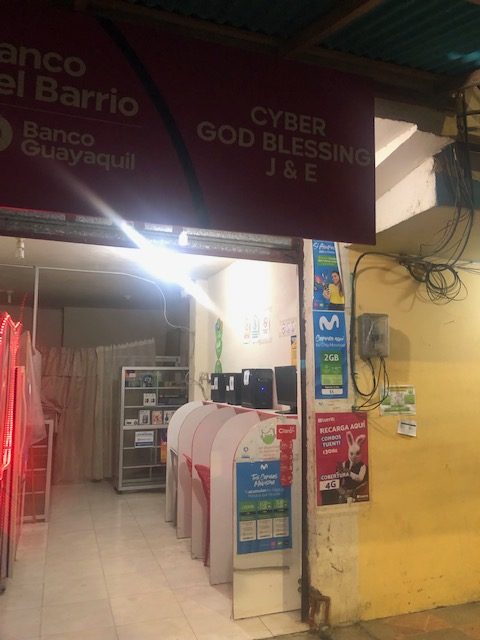 In poorer countries, not everyone has a smart phone or internet at home. This is a cybercafe where people pay by the hour to rent a computer. They are usually packed with kids playing video games on the computers. I passed this one every day on my walk into town. It never had a customer.

As the weekend approached, the town started to fill.  My hotel registered a few more guests, mostly young couples or families from Guayaquil looking for a few days at the beach.  The streets started becoming more crowded with lots of partying teens and young adults.  Bigger dance clubs with pumping bass thumped until the early morning hours.  It still wasn’t quite the same as I remember, but the weekends livened up the town enough to keep the residents functioning during the slower week days until the high surfing season arrives.

I enjoyed the contrast.  I  liked both having the town to myself and talking to folks on the street during the busy weekend.  I was comfortable.  My book was coming along.  I was relaxed and enjoying my routine.  I had a couple more weeks to stay.  I was looking forward to getting my work done.

Then the wheels fell off.

I got sick.  Really sick.  Life threateningly sick in a town that didn’t have a doctor, hospital, or even a medical clinic.  It got ugly.  Stay tuned for the next installment “Escape from Ecuador” on Monday covering my illness and how I made it back to the USA while my body was trying to die.  It was a unique travel experience that I don’t ever want to experience again.

One of the streets where I often ate dinner outside. Pretty, but no other customers during the week.