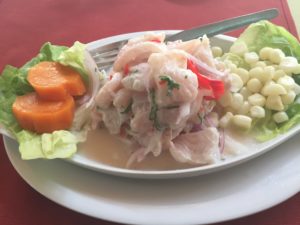 Amazing fish ceviche lunch at a sidewalk cafe in Lima

If you noticed the lighter posting schedule during the past couple weeks, it’s because I’ve been traveling.  I went down to Peru for two weeks.  I had visited Peru about 10 years ago and have already done all of the normal tourist activities like hiking the Inca trail, visiting Machu Picchu, and hanging out in Cusco and Lima.  This trip was a little different.

I started out with a couple days in Lima and then flew to Iquitos, where I boarded a boat for the jungle.  I stayed eight days in the Amazon jungle learning about traditional Amazonian plant medicine from a jungle “curandero” who has been practicing almost 50 years.  It was an amazing experience to cultivate the medicinal plants, blend them together, turn them into medicine, and see how they are used in traditional healing ceremonies.  The work I did down there will definitely enhance my teaching skills back here in the real world. 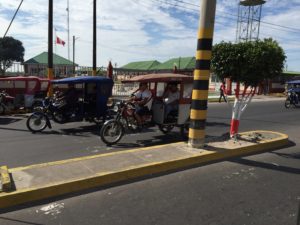 Unusual in most of South America, but in Iquitos, the “tuk-tuk” motor taxi was common. The town very much reminded me of Cambodia.

After my stay in the jungle, I flew back to Lima and spent a couple more days there (with air conditioning, warm showers, and all the incredible food available in that city).  As I usually do, I spoke to a lot of folks about what kind of crime dangers the locals and tourists face, how the police operate, and the gun situation for Peruvian citizens. 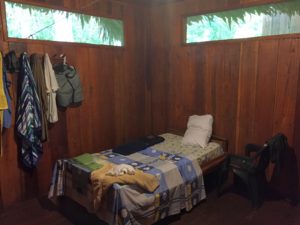 My jungle accommodations at the plant sanctuary

There are both local and National police forces in Peru.  Both are seriously underpaid.  The general consensus is that both groups do a fairly good job investigating and prosecuting (the rare) violent crimes, but virtually ignore property crimes.  There is so much petty theft that the police are completely overwhelmed.  If you want them to investigate a property crime, you’ll have to pay them some bribe money to do it.

Speaking of bribes, the going bribe for a traffic cop is 50 Peruvian Soles (about $15).  Taxi drivers were very adept at avoiding the cops on the take.  One driver explained that almost all cops working in pairs or as a team were extorting bribes.  It was rare that a single officer would be soliciting bribe money.  Thus the taxi drivers were very alert and instantly changed directions whenever they saw a pair of traffic cops working a roadblock.

The National Police wore Beretta 92 pistols in full flap belt holsters.  Most of the holsters were angled muzzle forward on the belt almost like the 1970’s era LAPD swivel holsters.  It was rare to see a National Police officer carrying anything other than a pistol on his belt.  Occasionally I would see a set of handcuffs or some type of short rubber truncheon, but none of them carried any other gear with them.  There was talk about an upcoming switch to the Beretta PX-4, but I didn’t see any of those pistols actually being carried.

Security guards all carried .38 revolvers.  Most were 4″ K-Frame Smith and Wessons, but I saw a couple Taurus revolvers as well.  Interestingly to me, almost all the revolvers wore rubber Pachmayer grips.  Spare ammo was minimal and consisted of a couple of cartridges carried in open loops on the outside of the holster.  Most guards carried somewhere between two and five spare cartridges.  One other interesting thing I noted was that all the security guards had holsters with dual retention straps.  The holsters had the old school “suicide strap” over the hammer, but they also had an additional strap around the trigger guard on the revolver.  It’s important to note these types of things when traveling.  If you need a gun quickly, a security guard is a good place to look.  It’s best to figure out how to remove the gun quickly.

One of the biggest misconceptions I regularly hear is the erroneous notion that people who live outside of America can’t own guns at all.  I’ve visited more than 40 countries in the last ten years.  The vast majority allow their citizens to own guns of some type.  The restrictions are usually far greater than those in the United States, but most people in other countries CAN own guns if they jump through the correct hoops.

I spoke to a couple of Peruvian citizens who are gun owners.  There is a pretty straightforward process to get a gun permit in Peru.  It consists of:

– Handgun permits also require a shooting test.  The qualification is shot on a silhouette target at 50 feet.  Five shots are fired.  One hit anywhere on the silhouette (or paying the tester 20 Peruvian Soles…approximately $7 dollars) passes the test.  No shooting test is required for a long gun.

According to the folks I spoke with, the entire permit process takes about two days to complete and costs around $150.  That doesn’t seem bad based on our salaries, but the average Peruvian income is around $500 dollars a month.  Considering that a separate permit is required for each gun owned, the $150 price is a steep cost for the average Peruvian.

The interesting thing about the Peruvian permit process is that the ownership permit also doubles as an unlimited concealed carry permit.  Once you can legally own the gun, you can carry it anywhere!

The government limits the caliber of handgun that Peruvians can own.  Peruvian citizens are not allowed to own any “military caliber” weapons.  In handguns, .38 special/.380 acp are the largest calibers  private citizens can own.  The Peruvian folks I spoke to who actually know and understand guns carry high capacity .380 autos.  They think that 10+ rounds of .380 acp is a better choice than a five-shot .38 revolver.  The guns of choice for those in the know in Peru are the Glock 25 (.380 auto not available in the USA that is the same size of a Glock 19) or the Beretta Model 85 in .380 auto.  Both of these guns cost more than $1000 in Peru because of high import tariffs.  Even at that price, it’s rare to find those weapons in a Peruvian gun store.  Most folks can’t afford the Glock, so the vast majority of gun store stock consists of Taurus revolvers.

The rural folks who hunt generally use single shot shotguns.  Surprisingly, most are in 16 gauge rather than the more commonly seen 12 gauge in the USA.  Hunting licenses are required, but the law often goes unenforced with regard to subsistence level hunting by locals.

Peru is a beautiful country and well worth your time to visit.  Check it out sometime!  Regularly scheduled programming will resume tomorrow. 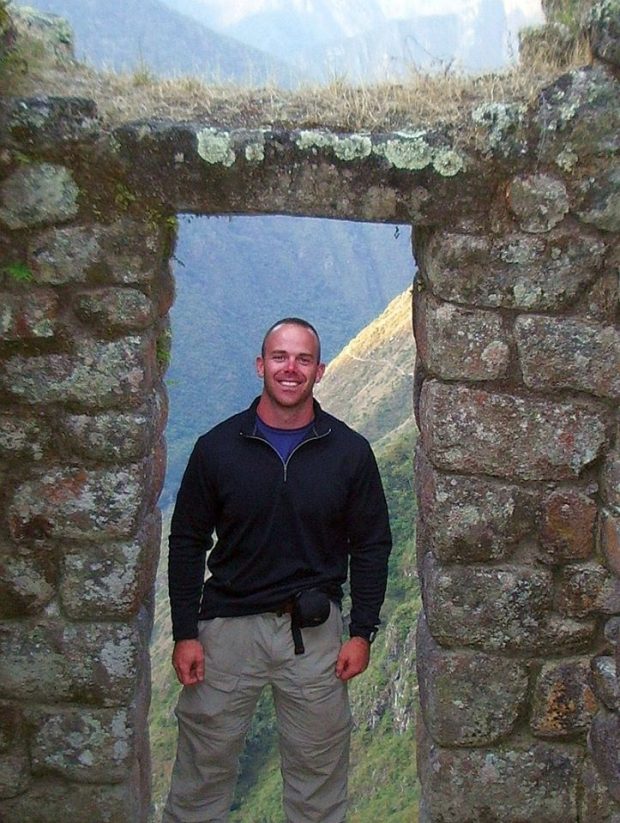 From my 2005 trip to Peru. A much younger and skinnier Greg on the Inca Trail.