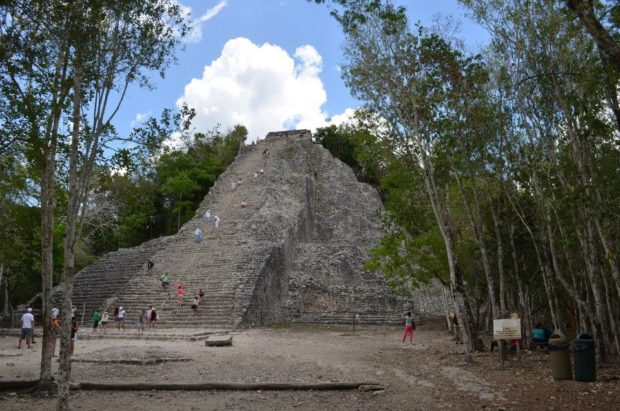 A quick little travel narrative for you today…

Lauren and I had a few days of vacation planned last week.  Our goal was to get to Cuba, but it’s difficult to arrange a flight.  There aren’t any direct flights out of America for tourists, so we would have to fly through Canada or Mexico.  Further complicating the matter is the fact that US banks won’t accept credit card charges from Cuban companies because of the trade embargo.  We couldn’t just get on Cubana airlines’ website and book tickets; we would have to use an international travel agency to book the flight.

I contacted a few travel agencies out of Canada.  They all told me that the flight that I wanted (from Cancun to Havana) was booked full on the dates we needed.  The only option was to show up at the Cancun airport with cash and hope to catch a standby seat.  We decided to give it a try, with backup reservations at a hotel in Cancun in case we couldn’t get on the plane.  No luck.  Not even a standby ticket available.  We were stuck in Mexico for five days…not really a bad fate to be delivered.

Lauren and I stayed at a hotel near the northern-most end of the hotel zone far away from the idiot tourists that populate the majority of the island.  We took a sailboat ride, visited the largest Mayan pyramid site in the Yucatan and lounged around every day on the beach.  We took the local “chicken bus” into downtown every night and ate at some fantastic local Mexican restaurants and visited the local carnival nightly for street food and desserts.  It was quite a peaceful and relaxing trip.

We didn’t talk to many Americans on the trip, as most of the guests at our hotel were Mexican or European.  Those Americans we spoke with seemed excessively fearful of being in Mexico.  They wouldn’t leave the relatively American -feeling hotel zone out of safety concerns.  They missed some amazing opportunities to experience another culture by fearfully hiding in the hotel zone.

Despite all of the media attention about Cartel violence, the Mexican states of Quintana Roo and Yucatan are quite safe.  The Mexican government does everything it can to protect the tourists as they provide a significant boost to the economy.  Beyond that, many of the hotels and restaurants in the hotel zone are at least partially owned by cartel bosses and used to launder money.  If tourists got killed with any frequency, those money laundering opportunities would disappear.  We never saw a hint of violence or any type of threat.

We did see some of the local police at work.  A drunk guy at a downtown festival was getting arrested one night.  The two local cops humanely lifted him into the bed of their pickup truck and handcuffed him to an iron ring welded onto the side of the bed.  Not quite up to American law enforcement standards, but they didn’t mistreat their prisoner. 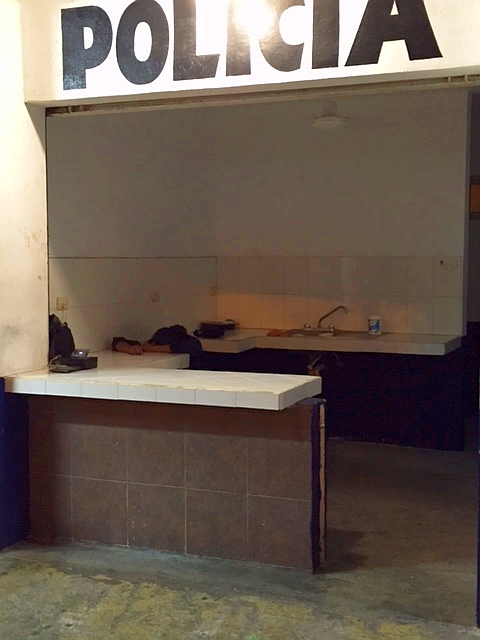 Look closely at this police substation in downtown Cancun. There is a female police officer passed out asleep with her head on the desk…must be a pretty dangerous spot.

Some of the local cops were armed and some weren’t.  According to one former cop I spoke with, the locals have the choice of being armed or unarmed.  The armed officers have to go through a psychological test that scares away some of the officers from the armed jobs.  The locals carried a bunch of different pistols…mostly Glocks, M&Ps, and Third generation S&W autos.  I didn’t see any spare magazines and all of them carried no-name cheap nylon holsters.  The only other gear they had on their belts was a single pair of handcuffs.

The Federal police manned several of the roadblocks we went through.  They were kitted up with rifle plates, drop leg holsters and full duty belts for their Glocks.  Several carried four spare pistol magazines and about half had a long gun of some sort.  I saw a lot of M-4s (no optics), a few FALs, and one Uzi carbine.  Occasionally we would see military units with M-4s and belt fed machine guns mounted on the back of their pickup trucks.

Fortunately on this trip, we didn’t encounter any cartel hit squads.  On a previous trip down to the area a few years ago, a taxi I was taking was intercepted and passed on the highway by two pickup trucks full of cartel assassins loaded down with M-16 A1 rifles (likely from the American military).  The cab driver explained that they acted as a cartel quick reaction force to attack any of the soldiers or cops who dared to interdict any of the cartel drug shipments.  Fortunately, they didn’t have any interest in a couple of tourists and they drove right past us.

The cartels down in Mexico create a complicated issue.  Like in some American ghettos and in the favelas of Brazil, they drug economy has some benefits for the local communities.  The drug dealing and manufacturing provide jobs for the locals.  Cartel bosses build and staff schools and hospitals that the government can’t afford in order to garner additional favors from the local populace.  Many of the locals are frightened by the cartel violence, but depend on the cartels to improve their standard of living.  It makes it tough for them to be eradicated because they are valued (while being hated at the same time) by the locals for their community contributions.

If you are interested in travel to Mexico and plan on traveling to the Caribbean coast, you likely won’t have any trouble as long as you stay away from the drug dealers and cartels.  Smile a lot.  Be polite.  Try to learn a little Spanish.  Read my book.  You’ll be fine. 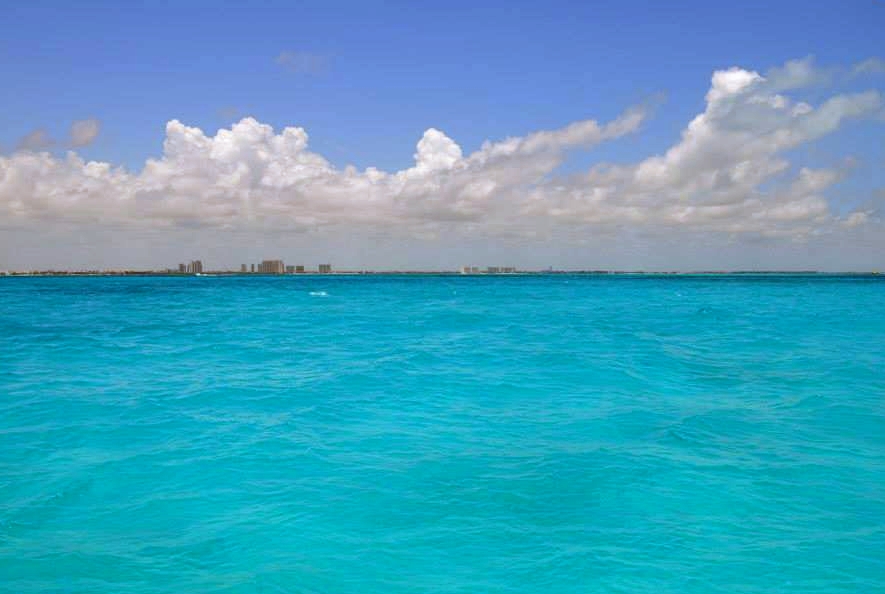 View of Isla Mujeres from our sailboat