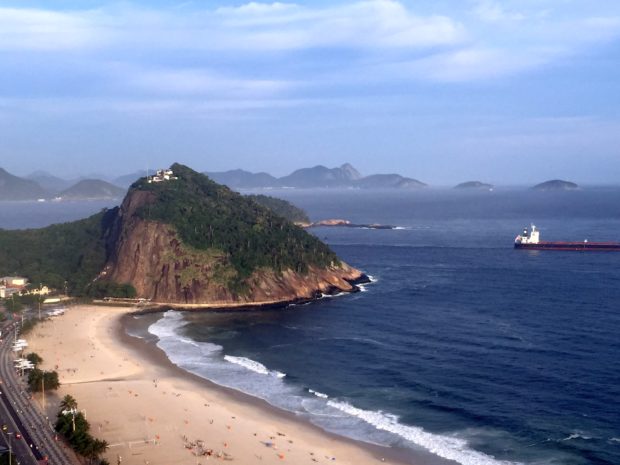 Leme Beach in Rio from the roof of our Copacabana hotel.

If you noticed some of the recycled content last week, it was because I was traveling again.  We wanted to get away from the cold weather, so we took a short trip down to South America.  Brazil is one of my favorite countries and I absolutely love Rio de Janeiro.  My girlfriend had never been there, so we flew into Rio so I could show her the sights.  After spending a few days in Copacabana, we flew to Montevideo, Uruguay.  Uruguay was the last country that I wanted to see in South America.  I have already traveled through all of the other countries down there except the extreme northeast  (Venezuela and the three little formerly French countries).  Having no desire to travel in that region, getting Uruguay completed South America for me.

After spending three days in Uruguay, we flew back to Rio and finished out our stay with three more days in Ipanema.  It was a good trip.

While this makes my sixth trip to Brazil, I hadn’t been to Rio since Carnival in 2010.  While there, I grew to love Copacabana over the more posh Ipanema neighborhood.  The beaches were less crowded, hotels were cheaper, and the water was cleaner.  It was still a safe place to stay, and was much more enjoyable than hanging out with the “pretty people” in Ipanema.  This trip changed my opinion a bit.  In the five years since I had been there, Copacabana has taken a downturn.  It’s now significantly “grittier” than it had been in the past.  It was still pretty safe and we had no problems, but there were fewer tourists, more thieves roaming the beaches, and significantly more prostitutes walking the street. 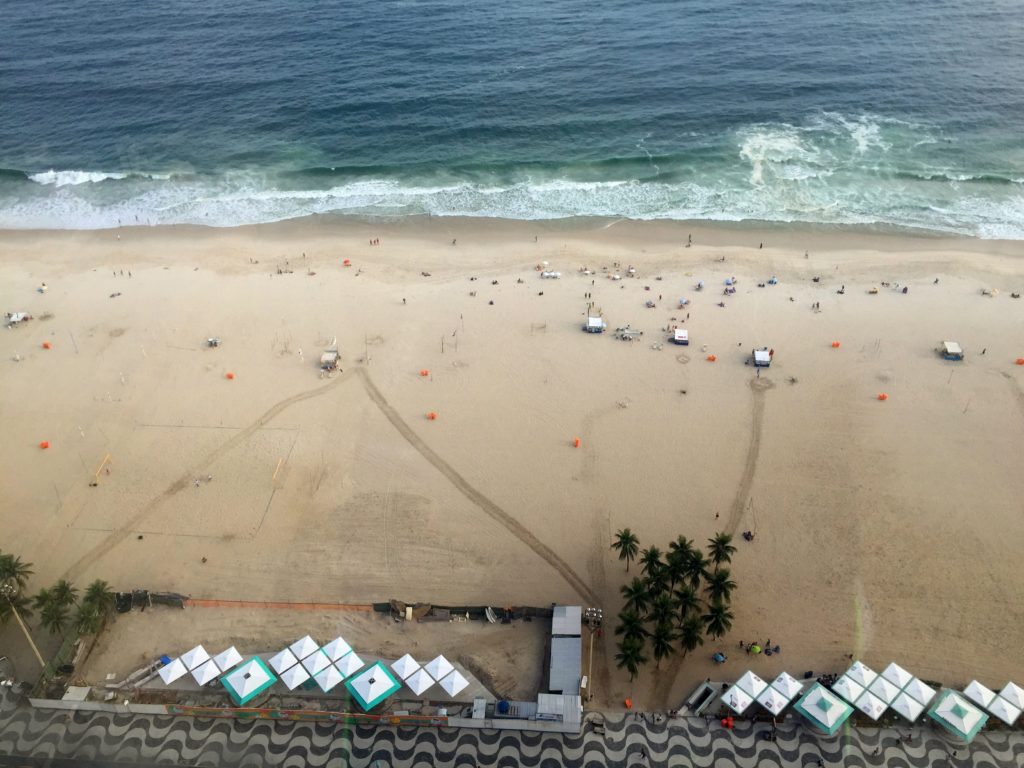 I didn’t know what to expect from Uruguay, but I was very pleasantly surprised.  The airport was new and efficient.  We quickly passed through immigration and customs without filling out a single form, obtaining a visa, or getting our bags searched.  Our bags came quickly and cabs waited at the curb in an orderly queue.  All the cabs are metered and the cabbies take payment in US dollars, Brazilian Real, or Uruguayan Pesos.  Most astonishingly to me was the fact that everyone drove the speed limit and no one honked their horns!  If you’ve ever traveled in Latin America, you’ll understand what a rarity this is!

As we were driving to the hotel I booked, we passed numerous joggers and cyclists.  The majority of them were wearing reflective vests or belts (like the military PT belts).  All the cyclists wore helmets.  People drove in a sane fashion.  It seemed to be a very safety-conscious country.  I found it amusing that the health and safety concerns continued as we checked into the hotel.  There was a huge sign on the wall of the hotel bar stating (in Spanish) “Less salt, longer life.”  The same saying was printed on all the menus in all the restaurants we patronized.  The whole country had declared war on dietary salt!  How strange for a Latin country.  I had a hard time with the concept of reducing salt for a population who still couldn’t drink the tap water.

We spent a couple days touring Montevideo and then spent our last day at one of the city’s more popular beaches.  Both of us really liked the country.  As per our custom, we only ate in local restaurants and had some excellent steak with the country’s favorite alcoholic drink, Media y Medio, (half and half).  It was half sweet white wine and half champagne or cider.  It came pre-mixed and was sold in wine bottles.  We found it quite refreshing in the hot summer sun.

We also ate the favorite national fast food, the “chivito.”  Chivitos are essentially steak sandwiches, with lettuce, onion, tomato, cheese, fried egg, bacon, and ham on top.  You could choose to have your chivito served on a bun or eat it served on a bed of French Fries (no salt).  We chose the fries and had a very filling meal.  Many Uruguayans would eat this meal in lieu of going to fast food restaurants.  All the corner chivito restaurants had significantly more customers than the McDonalds, KFC, and Burger King restaurants we saw. 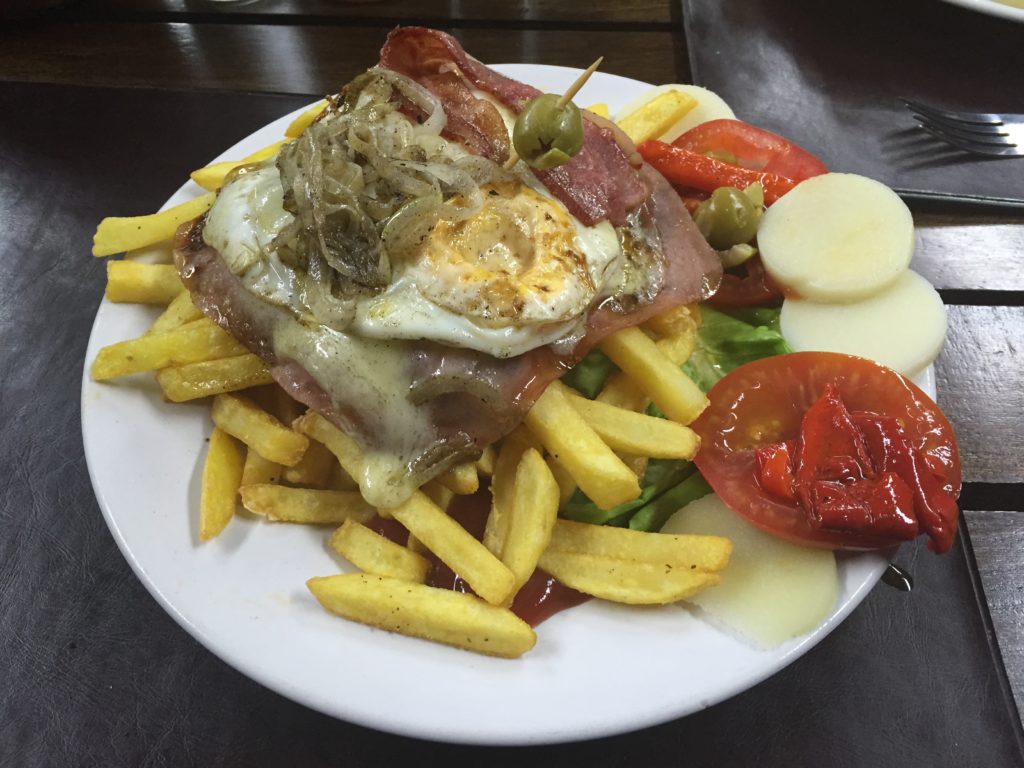 Montevideo seemed like a very safe place to live.  We had no problems at all.  There was a pretty heavy police presence, with all officers patrolling in twos and threes.  There were quite a few female cops (which is unusual for Latin America).  The police didn’t seem to be hassling anyone. We weren’t solicited for any bribes or given any undue scrutiny as tourists.  The police were polite and professional.

The cops seemed to be allowed some variety in their choice of gear.  All wore nylon gunbelts with Glock, H&K, or Sig pistols carried in either Serpa holsters or cheap looking plastic thumbreak holsters.  Some had spare magazines, some didn’t.  All carried handcuffs.  Some had a straight wooden baton.  No other less lethal weapons were visible.

We only saw one cop with a long gun.  He was patrolling downtown with his partner.  THE LONG GUN WAS CASED!  Judging from the shape of the case, it appeared to be a shotgun of some sort.  The case wasn’t big enough to allow for a semi auto rifle with a magazine inserted.  I’d never seen that before. 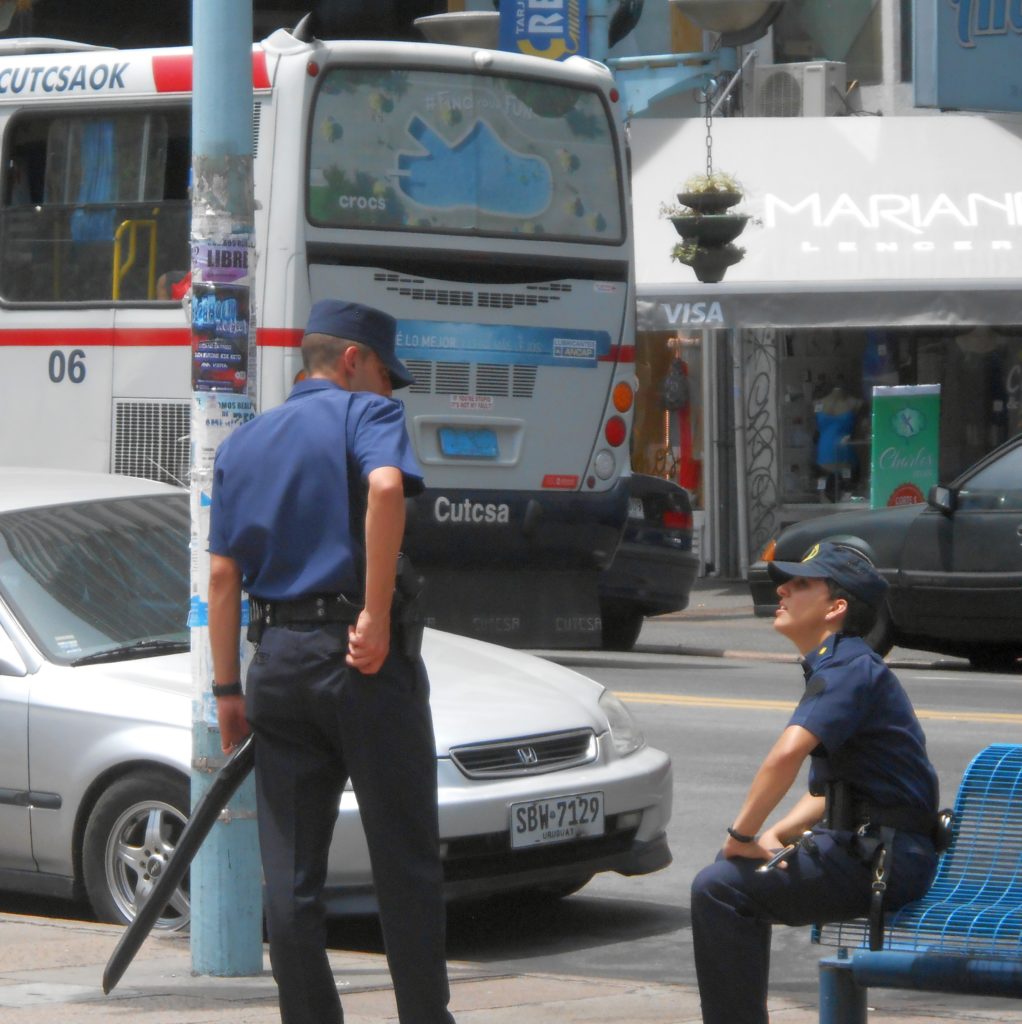 Uruguay is a fairly libertarian country.  Drug use is not criminalized.  The country was one of the first to abolish slavery and give women the right to vote.   Citizens can own guns (no semi-auto rifles, or military caliber pistols) with a permit process.  Carry permits are harder to obtain, but theoretically possible.  We saw one gun store, but it was closed on the day of our visit, so we couldn’t go inside.  People were friendly, but a little aloof.  They clearly weren’t used to interacting with Americans.  Everywhere we went, people assumed we were British.  Apparently, not many Americans make it to Uruguay. 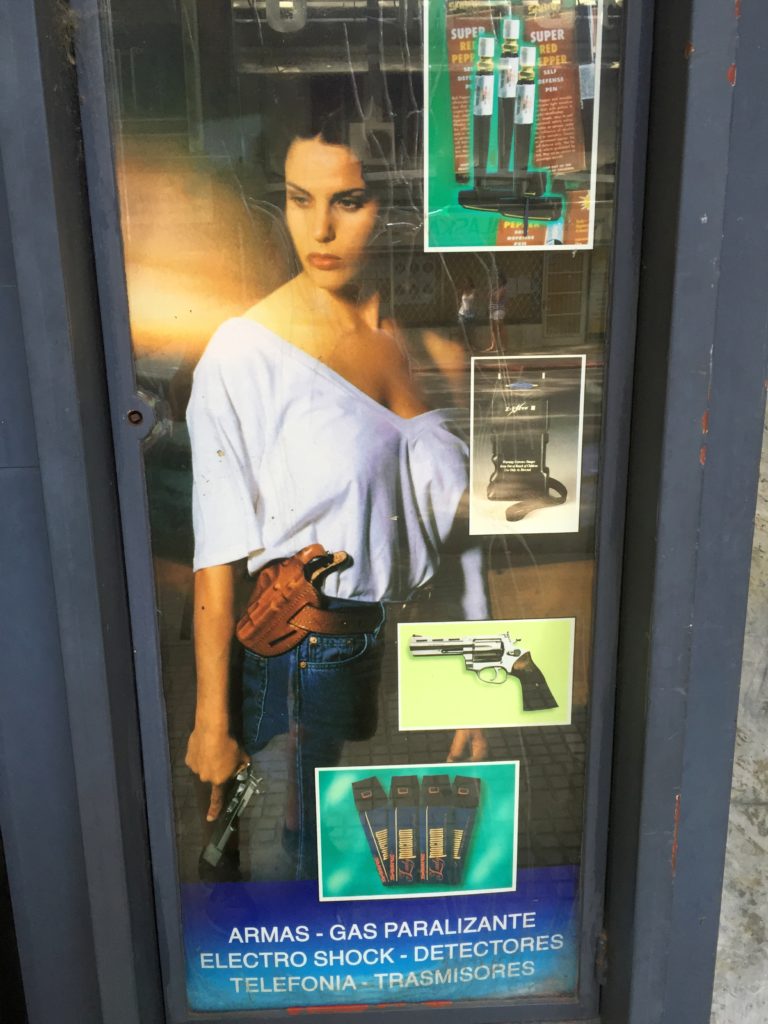 We only spent three days there, but I would like to go back.  It was a very pleasant country to visit. 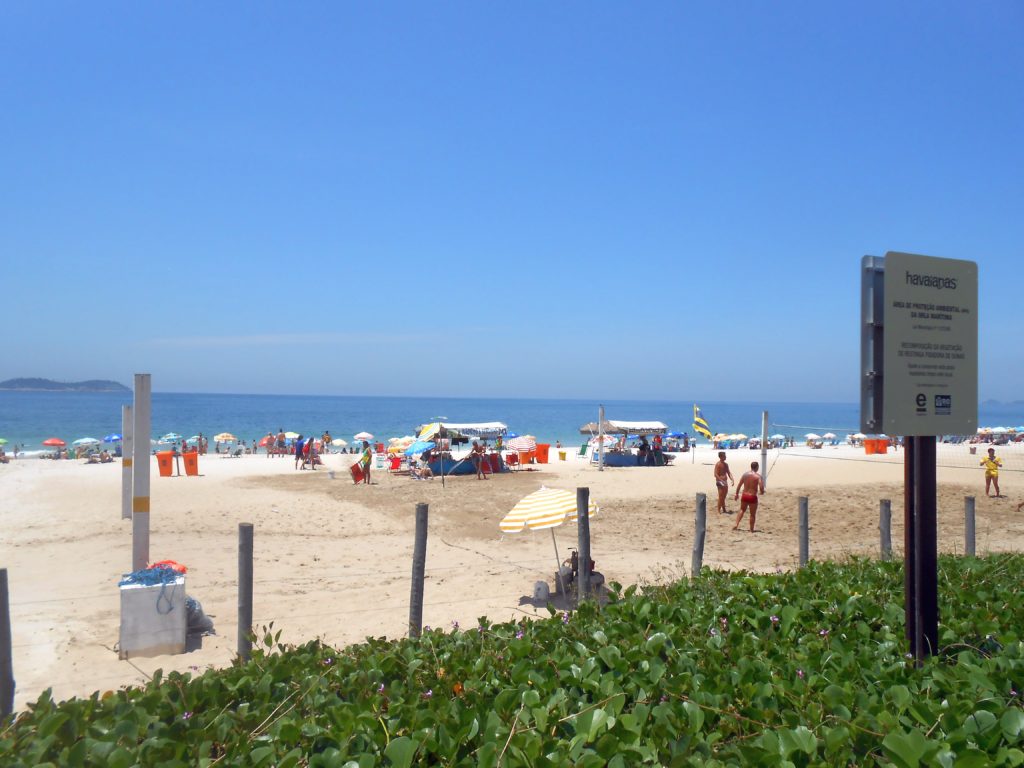 After flying back to Rio, we spent the remainder of our trip in the posh neighborhood of Ipanema.  We ate out every night at the various all-you-can-eat Brazilian BBQs (churascarias) and lounged on the beach most of the day.  I took Lauren on a Favela (Brazilian slums) tour as well. 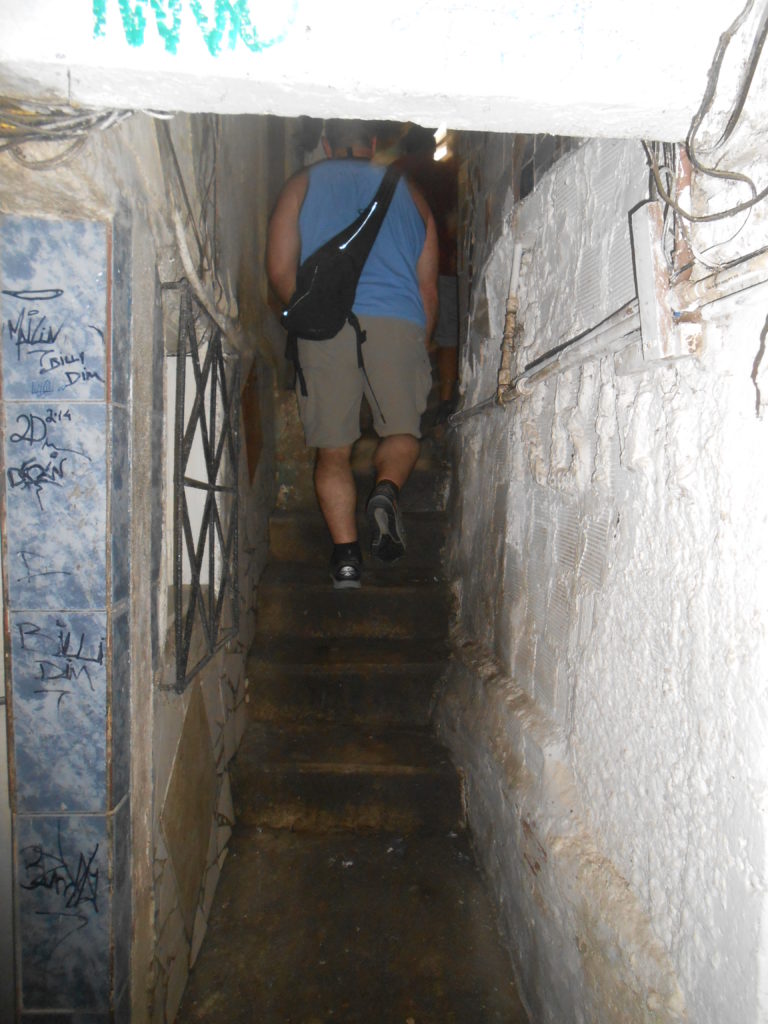 Walking on a sidewalk between favela houses. Most favelas have no roads and residents walk in narrow passageways like this to get to their “house.”

The favelas are Rio de Janeiro’s low rent slums.  You would be astounded at how few amenities were present in such a rich city.  The favelas don’t have running water.  Most electricity is “stolen” by running a wire out to a traffic signal on the “street” in front of the residents’ shacks.  Most Brazilian favelas are completely controlled by drug gangs.  Some have been “pacified” by police intervention.  Over the years I have spent time in both types.  While “pacification” is a controversial topic among Brazilians, it was clear to me that the pacified favelas were very different than those run by the drug gangs. 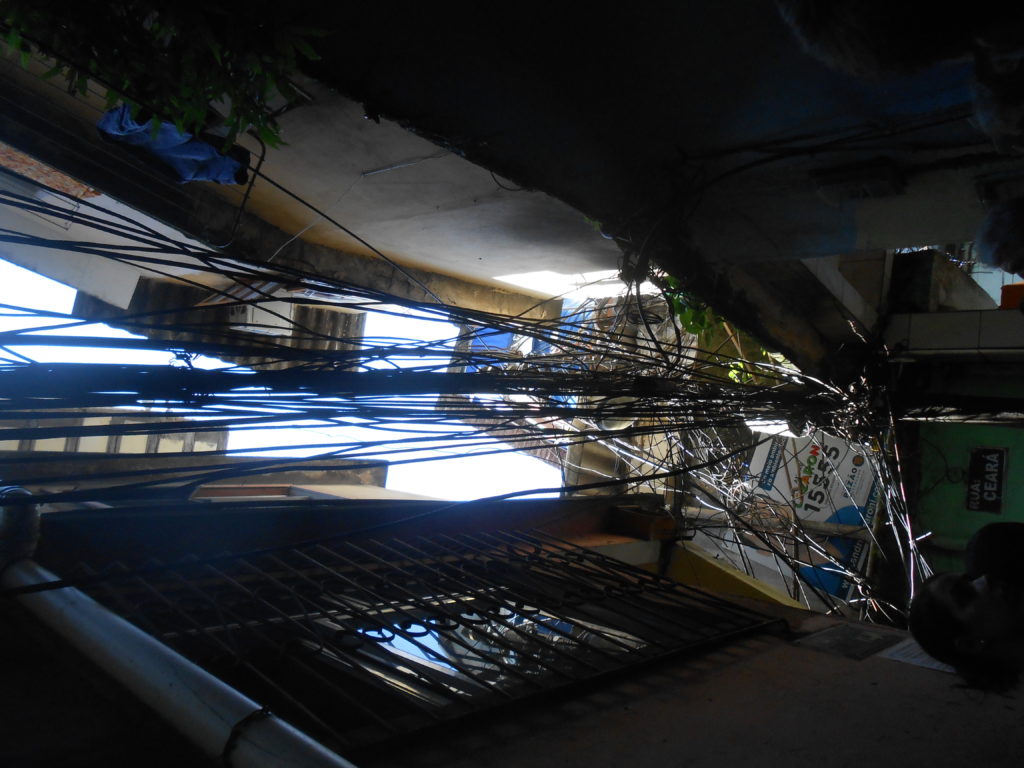 Looking up at all the home electrical connections in the favela.

On this trip we visited two pacified favelas, Vila Canoas and Rochina.  They were quite safe and doing brisk (drug free) business.  Unlike when I visited favelas controlled by drug gangs, there was no need to watch out for warring drug dealers or snipers on the roof.  It was actually safe to take photographs in the pacified favelas.  It was quite different from when I toured the same favelas when they were run by drug gangs in 2007. 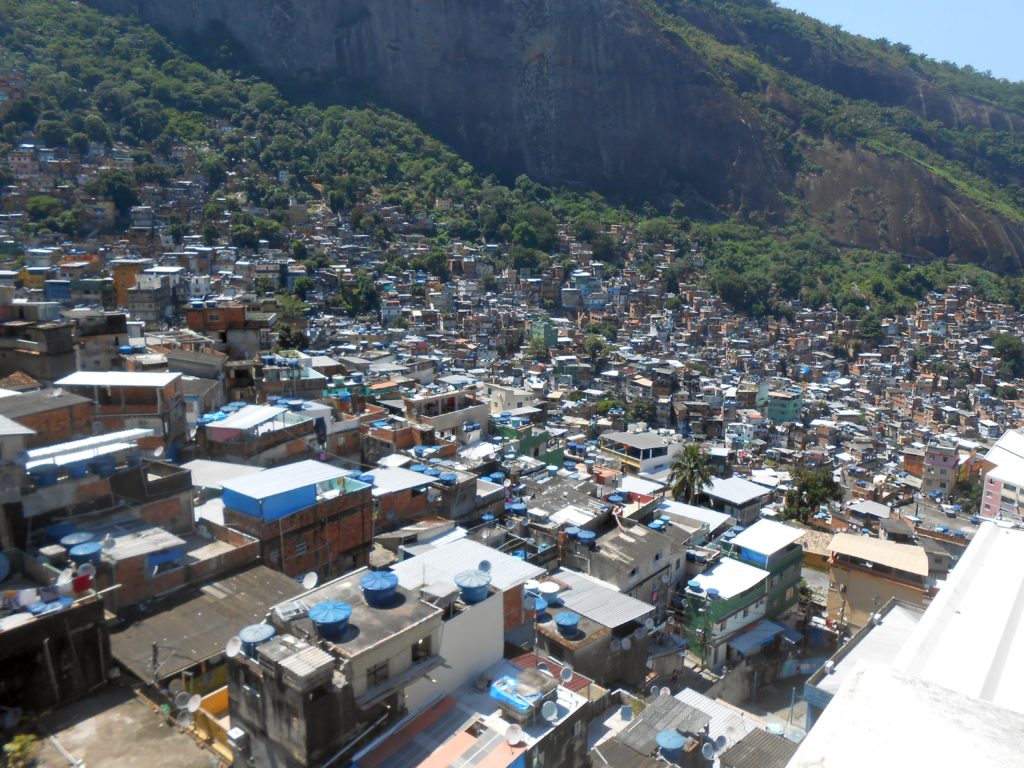 The Brazilian cops were pretty much non-existent as compared to the police presence in Uruguay.  Outside of the cops in the favelas (patrolling in threes with plate body armor and tactical rigs for their Beretta or Glock pistols), we never saw a cop in either Ipanema or Copacabana.

We didn’t have any problems with crime on the trip.  Our closest encounter with the criminal underworld was the location of our Copacabana hotel.  It was near one of Rio’s red light districts.  A restaurant near our hotel was the location where most of the prostitutes hung out…looking for business.  It was a useful exercise to sit around and watch them work one evening.  We spent some time watching from a distance, trying to identify the “normal” people, the prostitutes, the male customers, the pimps, and the criminals who preyed on the customers.  It was easy to identify all of these groups by just paying a little attention to what was going on.  Other tourists walked right past the whole affair without even noticing what was happening.

Watching your surroundings for a baseline idea of what normal people do is important when traveling to third world countries.  When you start seeing people behave differently than the baseline you’ve established, something is going on.  It’s up to you to figure out what that “something” is.  With a little attention, it’s fairly easy to figure out.

I suggest that everyone traveling in third world countries take a walk around their hotel neighborhood both in the daylight and at night.  Establish a baseline of behavior.  The look for anomalies in that baseline.  It’s a useful exercise and will have you identifying criminals very quickly once you do it a few times.

Although I really doubt that Rio will be truly ready for the Olympics next year, it is a very cool place to visit.  The Brazilian people are exceptionally welcoming and friendly.  If you are looking for a vacation destination that’s a little more “exotic” than Florida, I’d suggest you give Rio a try.

You’ll have to get a visa before you travel there.  The visa process is a huge pain in the ass.  You can’t do it yourself.  The Brazilian consulate requires that you use a visa processing agency.  We used It’s Easy Passport and Visa Processing.  I can’t say enough good things about this company.  They worked diligently to get our visas on very short notice in spite of significant complications.  The staff there worked up a very ingenious solution to handle a residency issue we were having that could have prevented us from making the trip.  I have nothing but great things to say about the company and will definitely use them again if I need an expedited foreign visa.

Back to normal programming later this week.