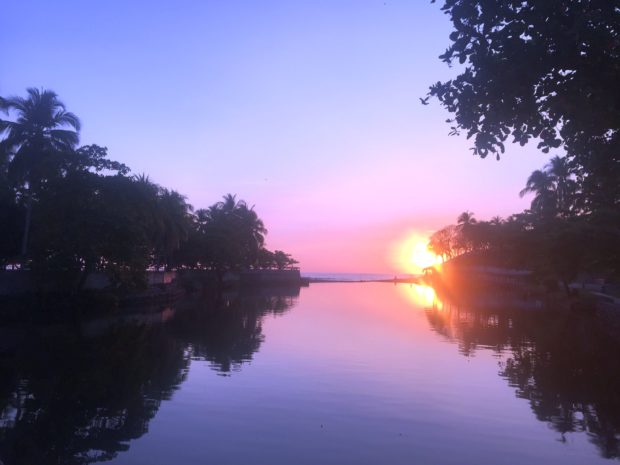 I spent last week vacationing in El Salvador.  Most of you are questioning my sanity right now.  Why go to El Salvador?  The country has the highest murder rate in the world when comparing countries not involved in a civil wars.  It doesn’t get a lot of tourism.

I went to El Salvador because it was the last Latin American country that I had not yet visited.  I’ve been to all of the other Latin countries in South and Central America.  I picked El Salvador solely to check it off my list.  I think it’s pretty cool to have visited all the countries in Latin America (except Venezuela.  That one is too dangerous, even for me).

El Salvador was surprisingly nice.  We landed there after a five-hour flight.  The airport was modern and clean.  We breezed through immigration and customs in only a few minutes and found our bags were already moving down the baggage claim conveyor belt on our arrival.

We pre-booked transportation to our hotel and found our driver waiting outside for us.  We drove about 45 minutes to a small surf town called El Tunco on the Pacific coast.  El Tunco is literally a two street town.  Everyone walks.  The only thing the town is known for is its excellent surf and nighttime party scene.  Most of the occupants of the town were surfers.  Rich Salvadorans filled up the few hotels on the weekends looking for a fun party/vacation spot.

We stayed in El Tunco for four days, relaxing on the black sand beach, swimming in the ocean, surfing, and eating lots of great local food.  El Salvador is known for its pupusas.  A pupusa is a soft corn tortilla stuffed with cheese, meat, or vegetables.  Think of them like thin corn Hot Pockets.  Everyone eats pupusas as their favorite snack food or as a dinner meal.  Street vendors sold three pupusas for a dollar.  The more upscale restaurants charged 75 cents to a dollar each.  We stuffed ourselves with pupusas daily and never spent more than $10 for two people (including drinks).  When we got sick of pupusas, we ate lots of great local fresh seafood. 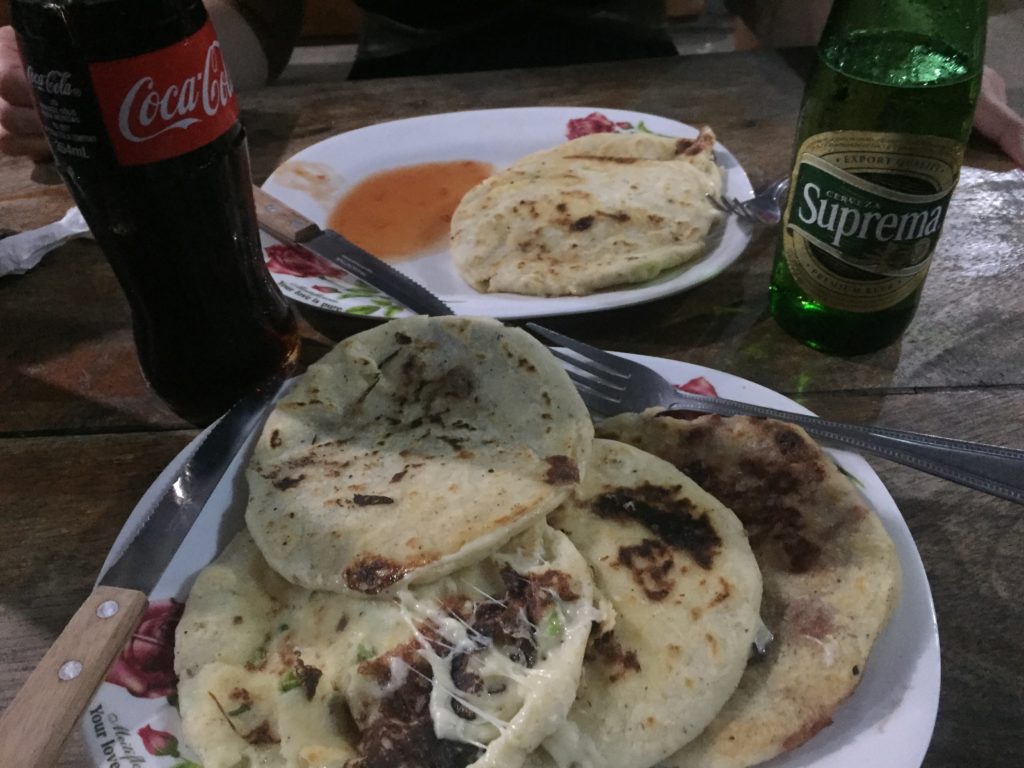 One of our typical dinners. Pupusas and drinks for less than $10.

After El Tunco, we spent two more days in the capital city of San Salvador.  We walked the city, visited some museums and handicrafts markets, and ate lots more cheap and awesome tasting local food.  One day we hired a local tour guide who gave us an all-day tour of the city as well as drove us to several national parks to climb volcanoes.  All in all, it was a great trip. 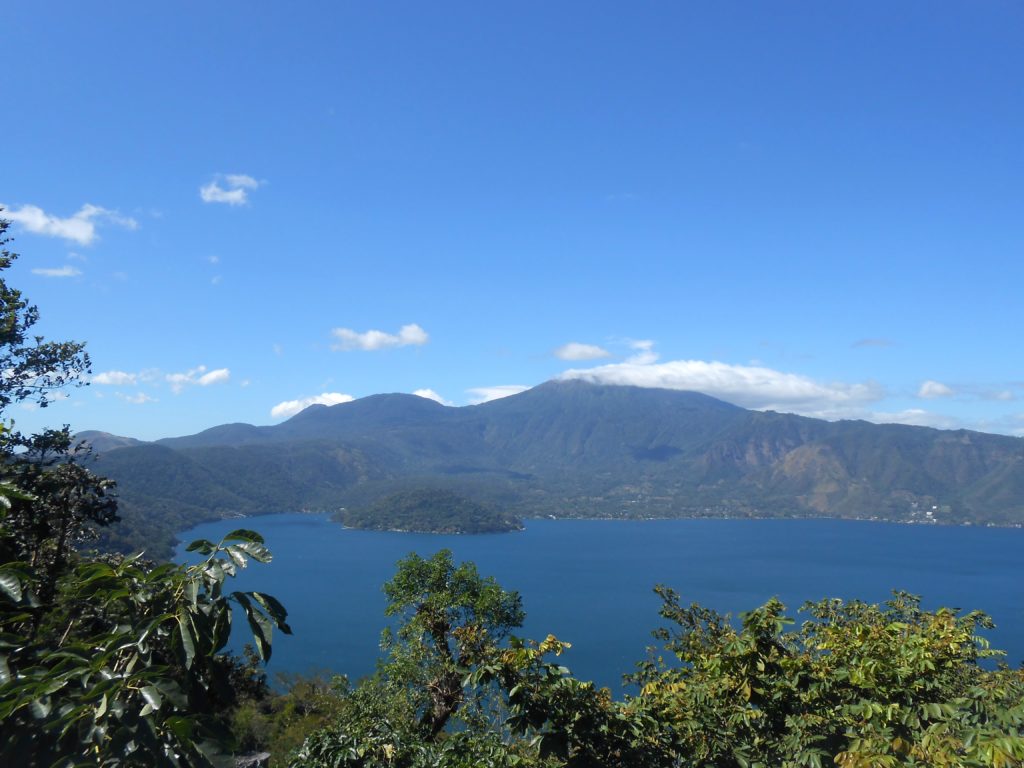 The “danger” of El Salvador is grossly overstated.  We had absolutely no problems at all.  Even though the murder rate there leads the world, I never felt a hint of trouble.  Subjectively, El Salvador felt much safer than many other countries I’ve visited. 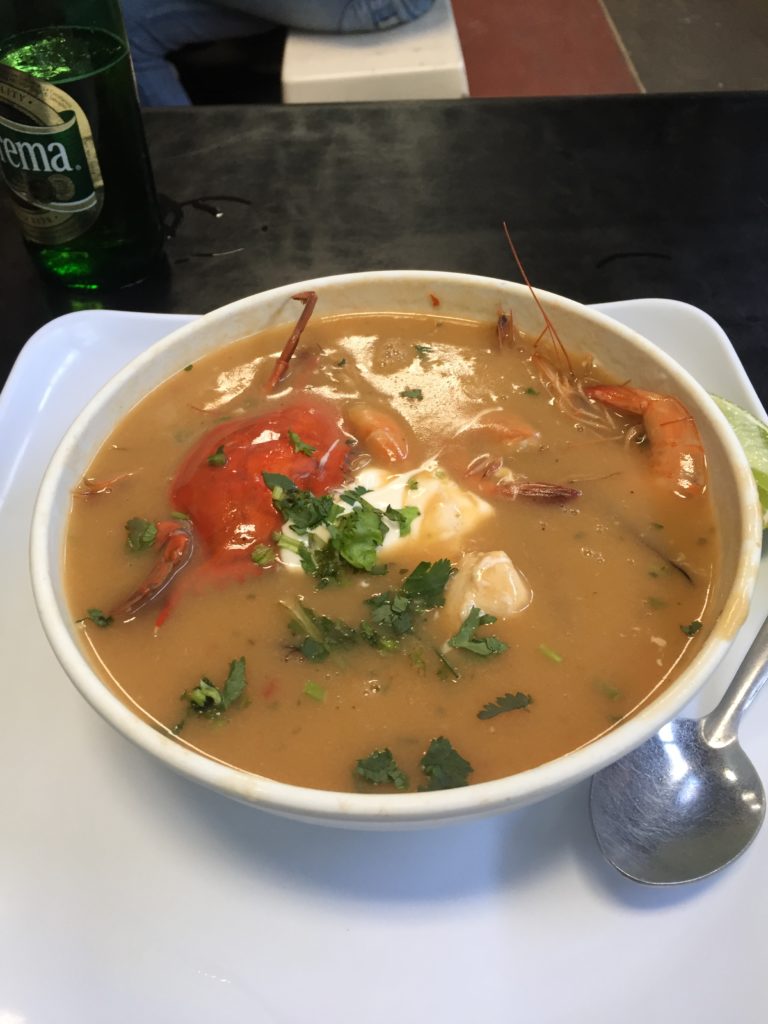 The violence the country is experiencing is (like in America) primarily related to drug trafficking and gangs.  If you aren’t trying to score drugs or provoke the gangsters, the chance you will be victimized is relatively minimal.  I spoke to several locals about the issue.  They all told me that most tourists get a “pass” from the local gang members.  The gangsters know that tourists bring an infusion of cash into the poor country (average wage there is around $300 a month).   They also know that killing tourists will bring a heavy police crackdown.  As long as the tourist isn’t doing something incredibly stupid, or acting impaired by alcohol or drugs, the relative risk or robbery and assault are very low.

I would have absolutely no problem recommending El Salvador as a tourist destination for any experienced traveler.  It’s remarkably safe in comparison to many other Latin countries.  English isn’t widely spoken and there isn’t a huge tourist infrastructure.  Having a passing competency in Spanish and the willingness to interact with the locals will help immeasurably should you choose to visit.  We found the Salvadorans to be incredibly friendly.  Almost everyone we passed smiled and greeted us warmly.  The people were courteous and polite to a fault. 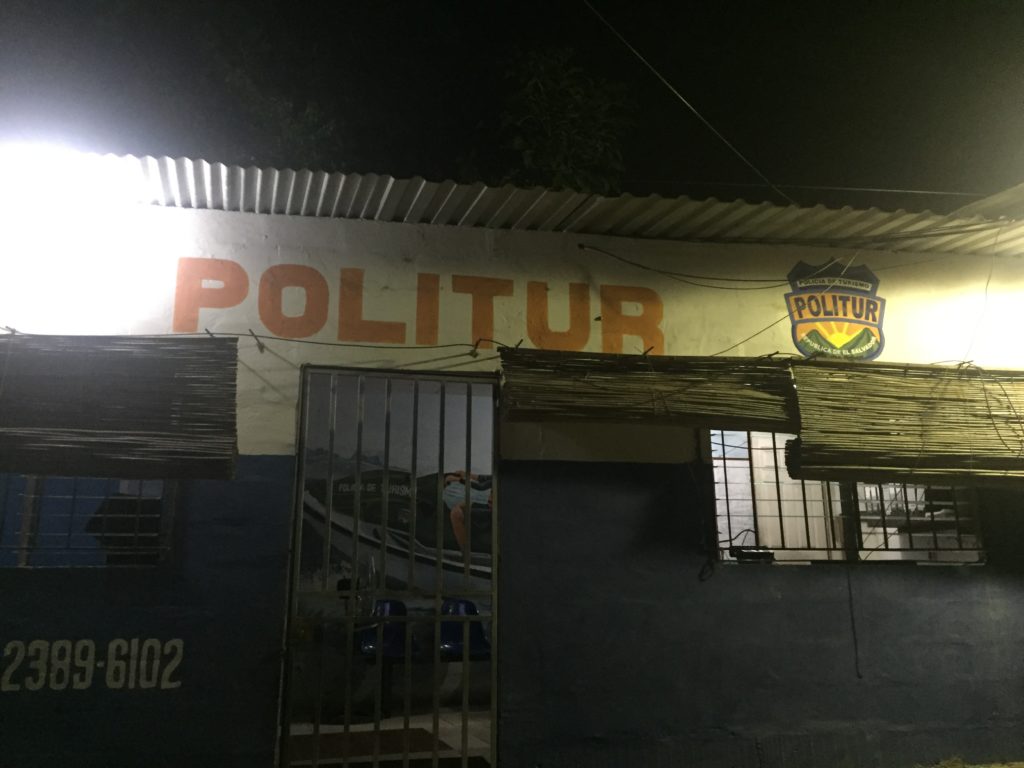 Police station in El Tunco. The cops here work out of a cell with no air conditioning.

I only saw a couple of cops carrying long guns.  We passed a truckload of gang suppression police riding in the back of a pickup truck, likely heading to a raid of some type in the city of La Libertad.  The cops all had their faces covered with balaclavas and had rifles (Galils and FALs).  Public transportation and national monuments were also patrolled by members of the Salvadoran military.  They wore camouflage BDUs and carried Beretta 92 pistols and M16 or CAR-15 rifles.  The general consensus among the locals was that the local police were rarely corrupt.  Most could not be bribed to get out of a traffic infraction.  The locals said that occasionally there would be stories of high ranking police officers working in concert with members of the drug gangs, but most folks said that the local street cops treated people fairly. 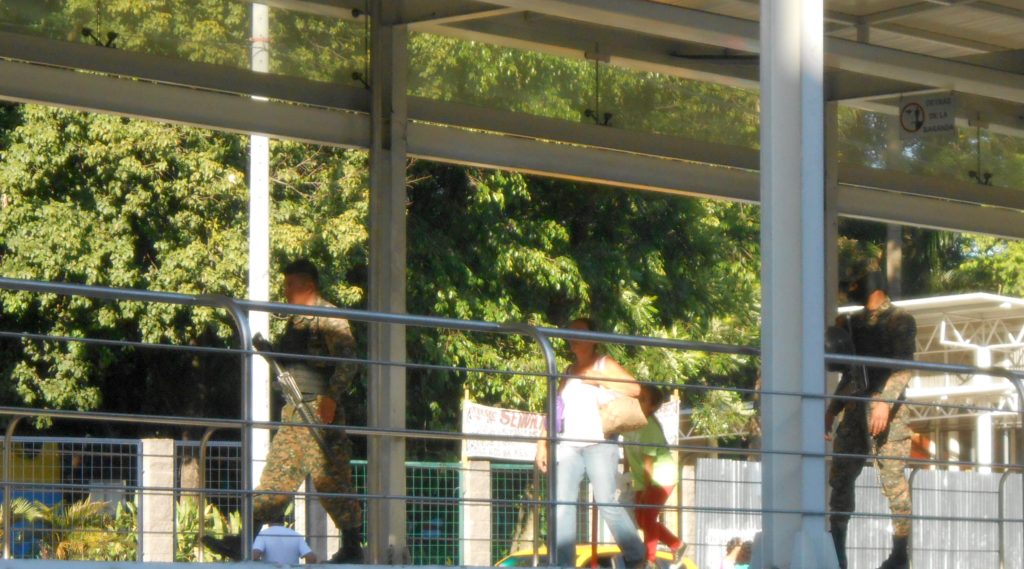 El Salvadoran citizens can own guns, but a relatively small number of “normal” residents actually own firearms.  The people I spoke with said that the high cost of guns (Glocks were reportedly about $900) was the main reason few people purchased them.  Not many folks will pay three months’ salary to buy a reliable handgun.  Locals also told us that there is also no history of a “gun culture” in the country like there is in the USA, leading to a lack of desire to be armed.

Citizens are limited to buying one gun every two years.  A permit is required to own a gun.  Residents stated that the permit process involved a background check, medical evaluation, and competency test.  The people we talked to said that the permit process to own a gun was fairly rigorous and expensive.  Getting a permit to carry the gun is even harder, with some type of demonstrated “need” for the gun required.  Reportedly only security guards and wealthy business owners get carry permits.

The security guard population was incredible.  Every single business, restaurant, hotel, and apartment complex had its own armed security guard.  About 75% of the guards carried slung pistol gripped pump shotguns (Remingtons and Winchesters).  Most had horrible muzzle awareness.  I think I was flagged by shotgun muzzles at least 50 times on the short trip.  Many of the shotguns were slung in such a manner that they would be impossible to quickly use.  I only saw one guard with spare ammo.  He had a bandoleer of low brass Federal #7 1/2 birdshot. 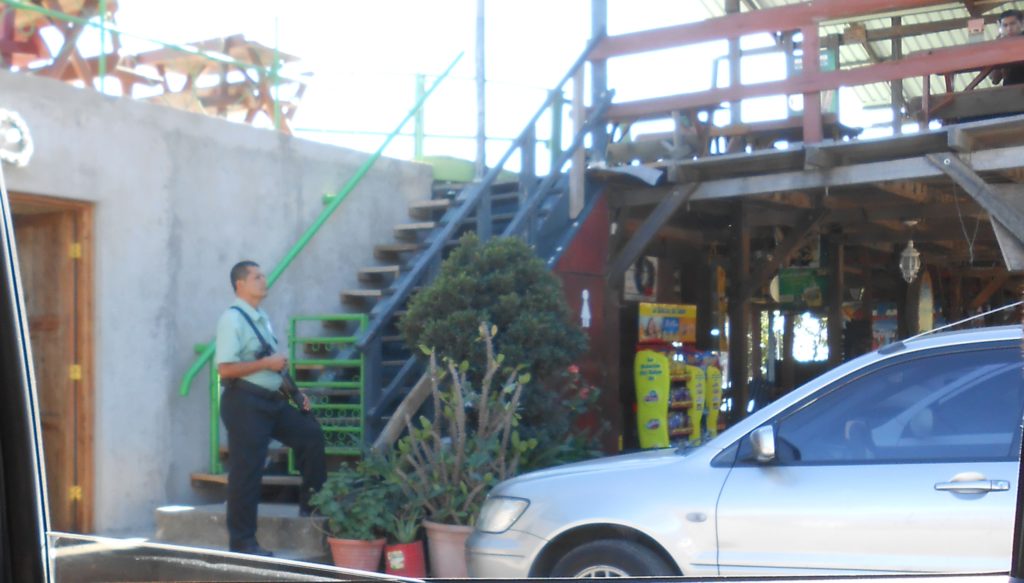 The other 25% of guards had handguns, mostly Smith and Wesson K-frame revolvers.  I also saw a couple of Beretta 92s and one 1911 (carried hammer down).  There were guns everywhere!  I honestly wouldn’t be surprised if many of El Salvador’s “murders” were actually negligent discharges!

That’s about it.  Nothing more to report.  We had a relaxing holiday in El Salvador and would definitely go back again.  If you are considering El Salvador as a tourist destination, please let me know.  I can get you the contact information for our amazing English speaking local tourist guide. 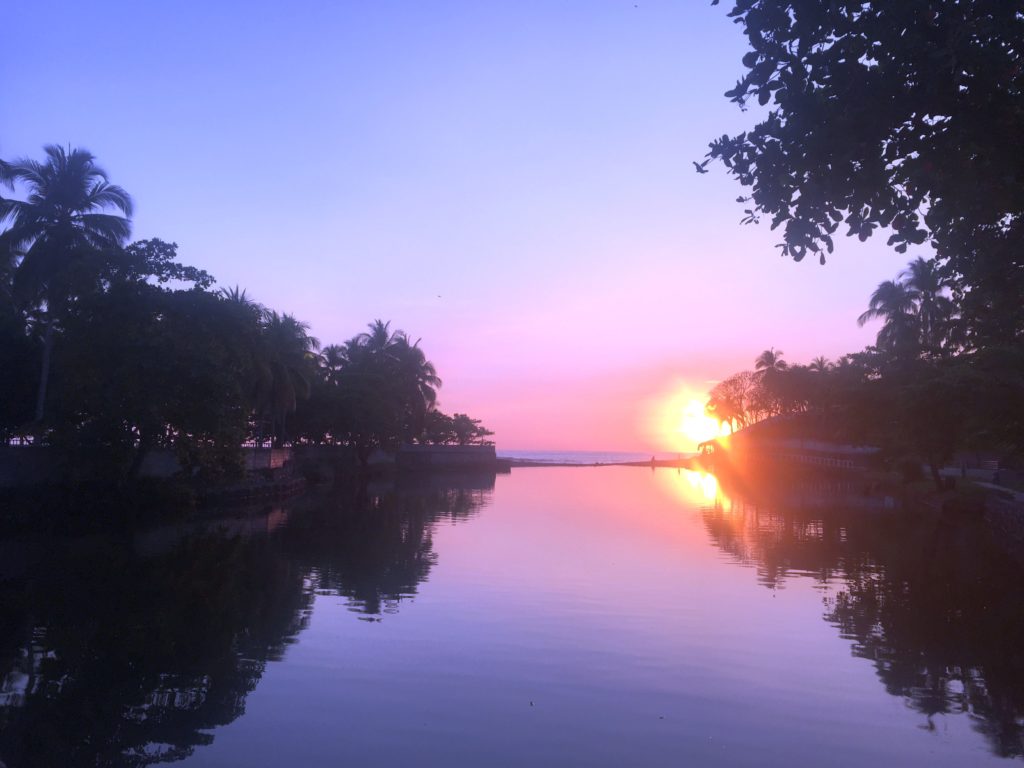