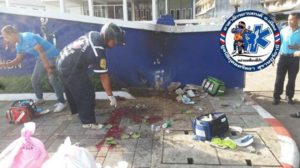 Last week I read a couple of insightful news articles about recent terrorist bombings and active killer plots.  They are worthy of study.  Having the terrorists’ “playbook” before they bring the game here is a valuable asset.

The first article describes a series of bombings in Thailand.  What is unique here is that the bombs were small and they were designed specifically to target tourists.  For what it’s worth, I’ve spent quite a bit of time in the targeted tourist towns.

“Thai police have admitted they knew bomb attacks were imminent but didn’t warn anybody.”

This isn’t unusual, even here in the USA.  Don’t rely on the government to protect you.

“..the devices were hidden inside plants on a street filled with restaurants, bars and food sellers that is popular with tourists and residents.

He said a Samsung mobile phone had been recovered that they believed was used to detonate at least one the bombs.”

There are only so many places that terrorists can plant bombs.  They used outdoor planting boxes in this case.  Trash cans are also regularly used.  Be alert when you see any type of permanently placed receptacles in a terrorist-prone area.  These receptacles are the most likely places bombs will be left.

Also note that these bombs were command detonated by cell phone.  Someone was watching and purposely set them off when foot traffic near the embedded explosives was high.  Pay attention to who is paying attention to you

“…debris and ball bearings could be seen strewn across the road as police investigated the scene. The blast damaged a pair of phone booths and shattered the window of a nearby Starbucks.”

Just like trash cans and planters, phone booths provide an easy location to hide explosives.  My guess is that these phone booths sustained so much damage because they were the actual receptacles for the explosives. 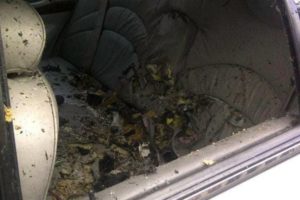 The second bombing took place in Canada.  Fortunately, in this case the bomber was intercepted by police before he could conduct his primary attack.  He was in a taxi and carrying two bombs when the car was stopped by police.  He detonated one of the bombs, killing himself and injuring the taxi driver.

His plot was fairly interesting and one we haven’t yet seen here.  According to the article, he planned a “rush hour attack on a major urban center.”

Have you considered how easy it would be for a terrorist to target drivers trapped in rush hour traffic?  The terrorist could simply crash his vehicle against a couple of other cars in gridlocked traffic.  That would bring all traffic on the road to a halt and the terrorist could then shoot the drivers who are sitting docilely in their cars without an escape route.

When driving, be alert for stopping traffic.  Leave plenty of room between you and other vehicles so that you can drive away if necessary.  Don’t get blocked in if you can avoid it.

If you are the target of a terrorist attack in a blocked vehicle, get out of the car and get away from the scene.  The auto body isn’t good protection against terrorist rifle fire.  If you sit in your car, you will be killed.  Be ready to make a break for it as soon as the shooting starts.

Do you drive with children in the car?  Do you have a plan to retrieve your kids and keep them under control as you flee an attack like this?  Perhaps you should.

I am often asked “Why don’t we see bombing attacks as often in the USA as we do in other countries?”

I think it’s because we have guns so readily available.  Explosives are often unpredictable and difficult to acquire and detonate.  It’s simply easier to kill large numbers of people with a gun than with a bomb.  You’ll note that in the majority of the countries where terrorist bombings occur, it’s relatively difficult for average citizens to get their hands on large capacity semi automatic or automatic rifles.  They can more easily acquire explosives, so that’s what they use.

With that said, let’s look into our crystal ball and make a prediction for the future…

Where do you see gun control legislation heading in the future?  I think it’s inevitable that we will see more restrictions on purchasing and owning guns here in the USA.  That will most certainly cause some of the terrorists to utilize more bombs in their quest for an ever-larger body count.

My crystal ball says that it’s a virtual certainty that we will see an increase in terrorist bombings on US soil.  It’s best to be prepared for that inevitable contingency.