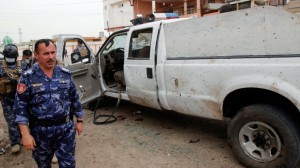 Take a quick look at this news article about the violent attacks that occurred in Iraq on Monday.  In one day more than 50 people were killed in several coordinated attacks spread all across the country.

The attacks were all similar and all the attackers wore police or military uniforms.  From the article:

“Elsewhere, Sunni Muslim militants disguised in army and police uniforms attacked polling centers around Baghdad and northern Iraq. Iraqi soldiers and security force members were out to cast ballots Monday ahead of the general election on Wednesday.”

“In the western Mansour district of Baghdad, six police were killed and 16 others were wounded when a suicide attacker dressed as a police officer detonated explosives near the entrance of a school used as a polling place”

“In Tuz Khurmatu, 55 miles (89 km) south of the northern city of Kirkuk, a suicide attacker in a police uniform killed three policemen and wounded nine near a polling station”

“In Kirkuk, another bomber in a police uniform killed six police near a voting outlet.”

“In Hawija, 40 miles (70 km) southwest of Kirkuk, one soldier was killed and four wounded by a suicide attacker in an army uniform near a polling center”

Many of you are going to skim the article and say something like “That’s why I don’t live in Iraq.” before going back to your reality TV programs.  Take a moment and really think about what these attacks could mean in your world.

Where do you think the terrorists in America get their training?  If something as audacious as these coordinated bombing attacks was so successful, the tactic will surely be repeated.

It would work equally well, if not more so here.  The Iraqis have a natural suspicion of their police and military.  With few exceptions, our country does not view its police in the same manner.  A person posing as a police officer won’t be questioned by anyone in the USA.

How do you get police uniforms?  It’s easy.  You steal them.

I have a friend who works on an FBI Joint Terrorism Task Force in one of the largest cities in the USA.  His unit has been investigating regular burglaries of dry cleaning businesses for years.  In these burglaries, the only items taken are police uniforms that officers have dropped off for cleaning.  This has been happening for more than five years and you don’t hear a thing about it in the media.  We’re ripe for an attack of this nature.

What can you do about it?

First, it’s important just to recognize that the possibility of a terrorist attack by criminals dressed as cops exists.  If you see a police officer or officers doing something obviously “unpolicelike,” be on your guard.

Second, recognize that most police departments have grooming standards.  You don’t generally see cops in uniform with unruly beards or long hair.  Cops will also be wearing a complete uniform in most jurisdictions.  If a person is wearing a police uniform shirt, blue jeans, and tennis shoes, he’s probably not a cop.

Look for bulletproof vests as well.  Most cops in the USA wear soft body armor under their shirts.  You can easily see its outline through the shirt.   Body armor is harder to steal than uniforms.  There’s a good chance that the terrorists won’t be wearing bullet resistant vests.

One other possible indicator is the lack of quality portable radios.  Any cop on patrol will be carrying a walkie talkie.  Those radios cost several thousand dollars a piece and may be hard for terrorists to acquire.  In most cases the radios will be of fairly large size (with the “box” at least six-eight inches long).  The radios usually won’t be the three inch versions that people can purchase online or at radio shack.  Most cops will also have either an ear mic and/or a corded microphone attached to either a shoulder epaulet or the center of their uniform shirt to make talking easier.

Take a look at the photo below posted from a police social media account honoring an officer’s retirement.  See the corded microphone attached to the center buttons of the uniformed officer’s shirt?  That’s what I’m talking about.  Terrorist might have hobbyist radios, but they probably won’t wear the corded microphones that most cops use on duty. 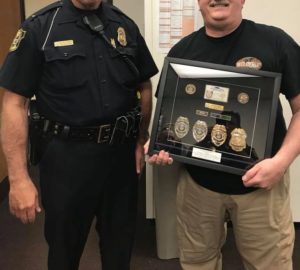 Finally, pay attention to how your local cops dress so that you can recognize any discrepancies you see.  Keep an eye out for suspicious activity around dry cleaning businesses, laundry places, and costume shops.  If you see suspicious activity, call the (real) police.

I think the next few years are going to be quite interesting.