Many of my friends are casual gun owners and cops who carry a gun on a daily basis while they are out in public.  Yet as soon as they get home they feel “safe”.  They take off their weapon, stash it in a drawer or safe and relax.

What most people don’t realize is that the majority of violent attacks occur in or around the victim’s home!  You are statistically more likely to need your gun at home than in any other location.  Yet, for most people, the gun is locked up or inaccessible.

Take a look at this news article:

The homeowner in this case was killed when three armed men burst into his house and shot him while he was laying in bed.  According to the police chief investigating the case, the victim:

“had a handgun nearby, but was unable reach it in time to defend himself”

Don’t let the same thing happen to you!  The absolute best option is to continue wearing your concealed handgun while you are in your home.  If you can’t (or don’t want to) wear it, make sure it is within arms reach.  You won’t always have time to run into another room to access it.

If you live in a house or apartment with young children or people untrustworthy around guns, place your LOADED handgun into one of the readily available locking pistol safes.  Punch in a four digit combination and the door of the safe will pop open.  It takes less than two seconds to access the firearm.  These are the best combination of security and ease of access for any gun owner who wants to lock up his or her gun. 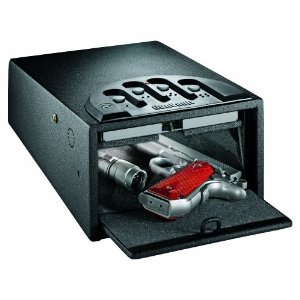 A safe like this one is a relatively inexpensive choice to keep your gun both handy and protected from unauthorized users.