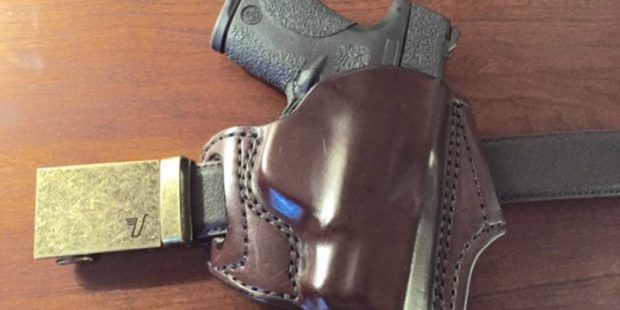 This installment takes a look at Cliff and his M&P Shield 9mm.

For once, I don’t have any real criticisms about this gun and holster choice.  I think the S&W Shield in 9mm is a great defensive carry gun.  I occasionally carry a Shield in the summer time when I’m not carrying my usual Glock 19.  It’s a great shooting gun that conceals very well, but there are a couple things you can do to make it a more efficient weapon.

If you want a Shield, make sure you get the 9mm version.  The .40 and .45 versions have significantly stiffer recoil.  Followup shot will be significantly slowed in all but the most expert shooter.  The marginal increase in “stopping power” is not worth the cost of slowed follow up shots, more expensive practice sessions, and developing a flinch from shooting the heavy recoiling rounds.

If you carry a Shield, test out the difference in concealment and shootability between the flat magazine baseplate and the longer extended baseplate (or even the Plan B baseplate).  I generally prefer the extended magazine.  Having the small amount of additional room for my little finger dramatically increases my recoil control in longer strings of fire.  Having an extra round doesn’t hurt either.

One other issue with the Shield is the factory sights.  The Novak style rear sight does not work well for one-handed reloads and malfunction drills.  I replaced my factory sights with the excellent Trijicon HD sights.  They are faster to acquire and can be used as a ledge to rack the slide against my belt or holster in the event one of my hands has become disabled.  If you don’t want to replace the sights, I would put a piece of skateboard tape on the top of the slide.  You can use the friction between the tape and your pants leg to rack the slide one handed in an emergency situation.  Please practice this skill with an unloaded gun before trying it live fire.

I also have no problem with the Mitch Rosen belt holster.  Mitch Rosen makes great holsters and well designed gear.  I have a couple of his holsters and they have performed well.  Having wrestled hundreds of students for their guns in force-on-force training sessions, I would generally advise anyone carrying outside the waistband to have some type of retention device on the holster.  The open top models like this one make it very easy for a skilled adversary to take your holstered firearm.  Open top leather holsters like this one offer better retention than open top kydex or plastic holsters because of more friction on the draw and the fact that they generally ride a little closer to the body.  Even though they are better than their plastic counterparts, adding a simple thumbsnap retention to this leather holster makes it MUCH harder for a criminal to take your gun.

My only criticism of this concealed carry set up has to do with the WAY the gun and holster is carried rather than the gun or holster itself.  Take another look at the picture above.  Notice any issues?

It looks like Cliff is wearing his gun crossdraw.  I don’t really like crossdraw (this article discusses the reasons why I don’t like it), but it is an option that some people prefer.  The issue with this particular holster is that it isn’t set up for crossdraw.  This particular holster has a 15 degree “FBI Cant.”  Notice how the gun is not situated in a completely vertical orientation with the belt.

The angled cant is designed for a gun carried behind the strong side hip.  The cant makes concealment a little easier and makes for a faster draw for some people.  It’s an individual decision.  Try both canted and non-canted concealed holsters.  Pick the one you like.  I prefer my holster without a cant, but many experts like the canted holsters as well.

Wearing an canted holster crossdraw like this moves the butt of the gun away from the gun hand and makes for a very awkward draw.  If you want to carry crossdraw, pick a holster with a neutral (straight up and down) cant or a reverse cant (angled toward the gun hand).  A little change in holster angle will make all the difference in comfort and smoothness of your draw.

If you’ve never heard the term “holster cant”, please check your carry holsters.  Make sure you are using a holster that works with your particular body style and drawing preference. 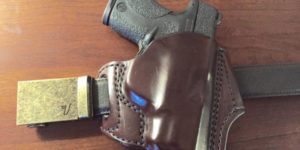