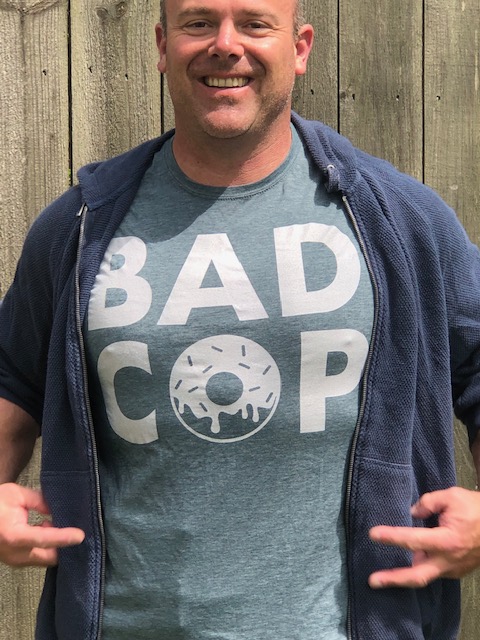 There are a lot of folks who say that deep concealment of your carry pistol isn’t necessary.  Those folks will tell you that people aren’t very observant and that most of the humans you encounter as you go about your daily life wouldn’t notice if you were open carrying a bazooka.

I actually agree with them.  MOST people are not observant and will probably not notice if your weapon concealment isn’t up to par.  But I’m not carrying my gun to protect me against the average dude in the grocery store or Suzy SoccerMom.  I honestly don’t care if those people aren’t paying attention.  I’m not worried about them.

I’m also not so worried about the strung out heroin addict looking to boost my wallet or the street hustler addicted to crack cocaine.  While those people may be threats, they can usually be managed relatively easily without using a firearm.

I’m worried most about the apex predator, that one percent of violent criminals who will kill me without hesitation.  Those guys will notice if my concealment methods are inadequate.  They see that gun that only prints “a little bit.”  To preserve every possible advantage in a confrontation with one of those guys, I make sure my concealed carry gun is truly concealed.  “Good enough” really isn’t good enough.

I was out running some errands this weekend and realized that I employ a few very specialized techniques to enhance my pistol concealment. I’ve never seen any of these methods described on the web or in a print format.

Undoubtedly other people know about them and use them regularly, but I haven’t yet seen anyone write about them.  I’ve been carrying a concealed pistol daily for 24 years now and carried on and off for many years before that.  I just figured this stuff out by paying attention to what people’s eyes are drawn to when they look at someone.

Countless gun writers have written about how choosing a dark colored, striped, or patterned cover garment will help camouflage your CCW piece.  That’s all great information to know and to practice, but I want something more than that.  I want to employ some visual trickery to draw people’s eyes away from my belt line where I carry my pistol.

Before I get into my specific techniques, I first want to say that the common “hoodie” (hooded sweatshirt) with a front kangaroo pocket is the greatest asset imaginable for anyone who carries in the appendix position.  Hoodies are loose fitting, are generally made from thick material, and that front pocket puts another layer of fabric over your holstered pistol.

If the weather is the least bit chilly, you’ll generally find me wearing a hoodie of some sort.  It’s the perfect casual camouflage.  If you haven’t already done so, embrace the hoodie. 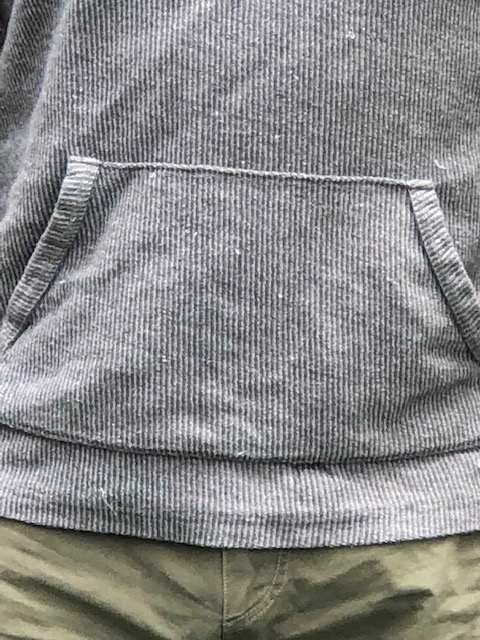 Who would guess that a Glock 19 is hidden right underneath that pocket?

Now, on to the point of my article…

We accomplish this visual trickery by utilizing color, pictures, and words.

Let’s look at color first.  If your pants and cover garment are in a boring, drab color, you can wear a T-shirt underneath in a bright contrasting color.  The bright color draws the eyes.  Look at the photo below. 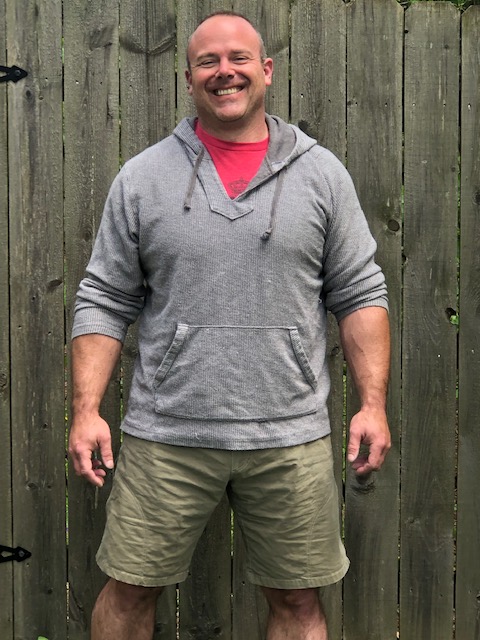 This is what I wore to go grocery shopping last weekend.  Note the drab colors of my shorts and hoodie.  Where is your vision drawn?

You naturally tend to look at the bright red t-shirt underneath.  When people’s eyes are drawn to your upper chest area, they aren’t looking at your waist and likely won’t see your concealed pistol.

You can do something similar by exposing some part of a picture on your base layer.  Don’t expose the entire photo.  Just expose part of the picture.  If people can’t see the whole photo, they will look harder trying to figure out what the picture is.  A ridiculous, shocking, or strange picture works exceptionally well for this.

Take a look at this outfit: 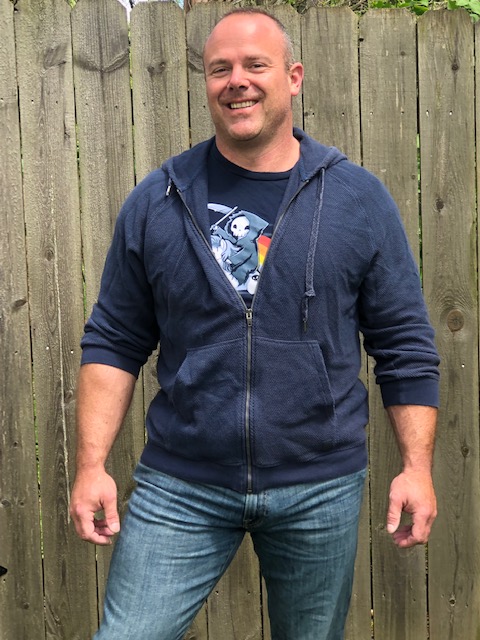 I’m wearing a T-shirt with the grim reaper riding a unicorn over a rainbow.  When you glanced at the photo, where were your eyes drawn?  That’s right.  You looked at Mr. Reaper.  You didn’t look at the Glock 19 holstered just below. 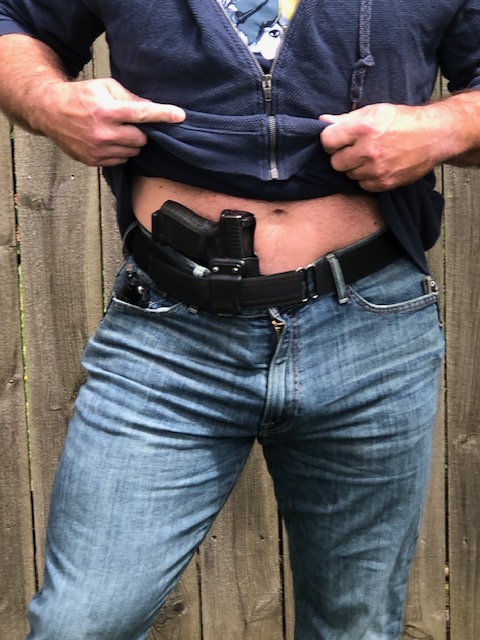 While you are looking at the grim reaper and unicorn, you aren’t looking at what really matters.

Note that my cover garments not only conceal my pistol, they also conceal my flashlight and knife as well.  We often think about hiding our gun, but sometimes fail to consider hiding our support gear.

If a dude is carrying a clip knife and a flashlight, there’s a good chance he’s carrying a gun as well.  Be aware of what signals you are sending.

Before I get a deluge of emails, I’m carrying a Glock 19 in a Spencer Keepers “Keeper Light” appendix holster with a Graith Specialist belt,  Spyderco Delica knife, and Fenix PD35 flashlight.

Words can serve the same purpose as a photograph.  Again, keep the words somewhat obscured.  People will try to figure out what the partially exposed letters signify.  When they are doing that, they are not looking for or at your pistol. 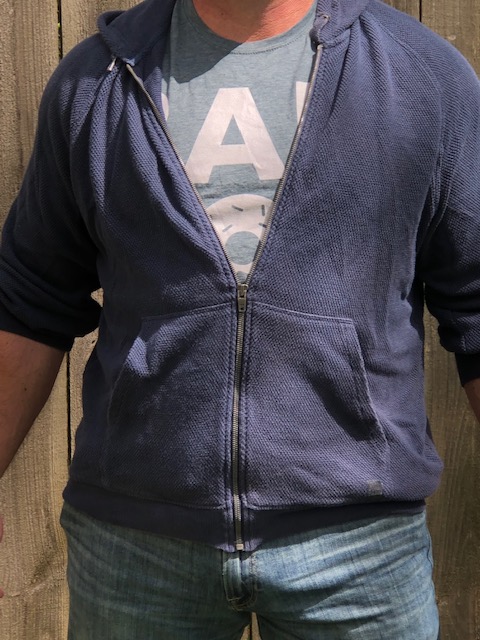 Aren’t you a bit curious to read the letters on my T-shirt?  The longer your eyes linger on those letters, the less chance you will spot my CCW piece.

Give these strategies a try.  I promise you will get “made” as a gun carrier in public far less often.