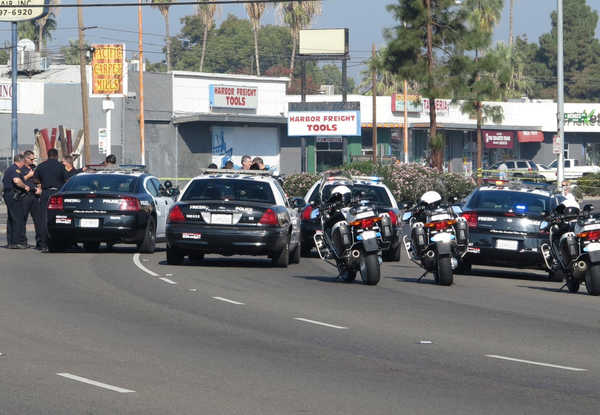 On the morning of November 6, 2012, an employee at a California chicken processing plant drew a gun and shot four of his co-workers (killing two) before shooting himself.  Initial reports classified this as an active shooter event, but upon further investigation it seems that the people who were shot were specifically targeted.  They weren’t random victims, nor was the shooter looking to rack up a large body count.  He wanted certain people dead and he went out of his way to try to make that happen.

This workplace violence incident is one that many have not heard of.  Even though it shouldn’t be classified as an active killer event, it was a horrific example of workplace violence.  There are many lessons to be learned from the actions of both the victims and the killer.  I read most of the latest news articles covering the crime.  Here are the points that stood out in my analysis: 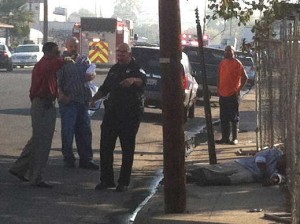 The killer, dead on the sidewalk after shooting himself.

1) Don’t depend on gun control laws to keep you safe.  According to one source, the killer here had multiple felony convictions stretching back more than 20 years:

“…had an extensive criminal history, authorities said. In 1994, he was sentenced to 13 years in prison for robbery, then released on parole in 2001, according to the state Department of Corrections and Rehabilitation.

Jones also served time for robbery and later for vehicle theft and other convictions, and was paroled on June 1, 2011, department spokesman Luis Patino said. He was discharged from parole on May 1, 2012.

He was most likely prohibited by law from owning or carrying a firearm due to his past criminal record.  The law didn’t stop his rampage.  Gun control laws only affect people who obey laws…not the criminals they are allegedly targeting.

2) When you know you are going to be killed no matter what, ACT!  Fight or flee.  What do you have to lose?  In this situation, the killer targeted three of his four of his victims and “walked up to three of his victims, placed a handgun to each man’s head or neck and fired.”

Only one of the victims took any action before she was shot.  His only female victim saw that she was about to be shot and ran.  She was hit in the buttocks rather than the head or neck like the other three.  The killer tried to shoot one more man, pressing the gun directly up against his head as well.  He pulled the trigger, but the gun was empty.

It is possible that none of the men heard the gunshots because they were wearing hearing protection.  Possible, but unlikely.  The report of a .357 magnum indoors is very noticeable, even with earmuffs.

If you know the killer is going to shoot you, take the chance!  Anything you do will likely lead to better results than standing passively and taking a bullet in your head.

3) If you are responding to an active shooter or shooting in progress (either as a cop or an armed citizen) don’t expect to be able to “run to the sound of the guns”.  Gunshots are difficult to identify and locate in an indoor location.  I’ve participated in several indoor active shooter training sessions where responding officers couldn’t hear blank guns being fired in the room next to them.  Stress induced auditory exclusion is common.  Shots may be covered by the sounds of fire alarms or screaming victims.  They may be muffled by loud machinery like in this case. 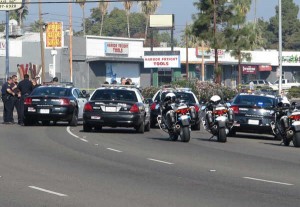 Cops responding to the shooting…they probably couldn’t hear the shots.

4) Be familiar with the operation of ALL weapons!  The killer here used a very strange gun.  It was reported as being a .357 Magnum 4-shot derringer The only gun I know that meets that description is the C.O.P. Derringer produced in the 1980s.  The COP (for “Compact Off-Duty Police”) was designed as a police backup weapon back in the days when cops carried .357 magnum revolvers.  The .357 magnum snubs of the day were pretty big to carry as a concealed second weapon, so the COP was created.

I actually have one in the police department’s seized weapons inventory.  It’s very slim, but it’s heavy.  The trigger pull may be the worst as any gun I have ever fired.  It’s an odd piece.

If you were fighting the killer and managed to disarm him, would you know how to use it?  If there were multiple killers and you didn’t want to leave a loaded gun where they could access it as you make your escape, would you know how to unload it?  Those may be life-saving skills to possess.  Just in case you never see one of these things, the rear sight moves backwards to break the gun open. 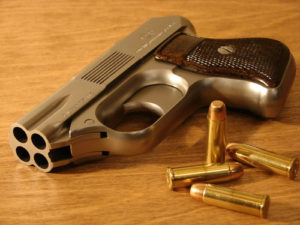 5) You may not have a full target to shoot.  Several witness reports claimed that the killer stalked his victims silently and used large pieces of machinery and tables as both cover and concealment.  An active shooter will likely be distracted as he commits his crime, but don’t expect him to be stupid.  If you are smart enough to use cover, your adversary might be as well.  Train by shooting at smaller targets or partial y obscured silhouettes if you want to be truly prepared.

Workplace violence has fallen out of the media attention lately.  Terrorists and active killers get all the news coverage.  Despite that fact, workplace violence remains far more common.  It behooves all of us to study these incidents so we can prevent something similar from happening in our places of employment.