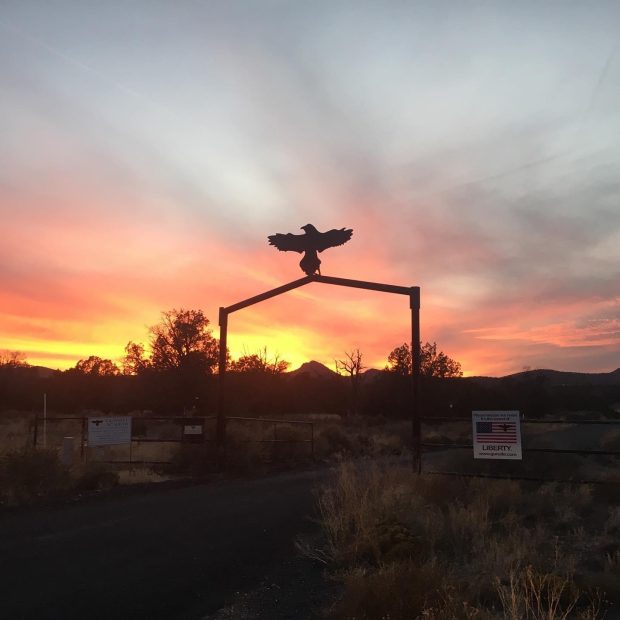 The weekend before Thanksgiving, I flew to Arizona to teach at the Pat Rogers Memorial Revolver Roundup at Gunsite.  It was the premier revolver training event of the year and featured instructors Darryl  Bolke, Wayne Dobbs, myself, Chuck Haggard, Dave Dolan, Mark Fricke, Caleb Giddings and Lew Gosnell.  It was a truly all star class who taught nearly 80 students over three days.

For a video intro, check out the link below.

The Pat Rogers Memorial Revolver Round Up At Gunsite!

It was an amazing class.  As it was my first time at Gunsite, I had to bask in the history for a bit.  It was magical going through those gates.

Gunsite CEO Ken Cambell created an extremely well organized and safe event where three or four classes were offered simultaneously throughout each day.  I taught blocks on revolver retention shooting, one handed revolver shooting, and low light revolver concepts.  My classes ranged in attendance from a low of eight people to a high of 29 people.  It was quite a challenge as an instructor.

Another challenge was the fact that many students couldn’t find .38 ammo to shoot in their revolvers.  Each instructor had to offer their class options to shoot the “normal” amount of rounds called for by the lesson plan while also providing more limited live fire opportunities for the students who didn’t have much ammo.

That challenge alone made the classes tougher to teach.  It was challenging, but we all made it work and the students seemed to be appreciative of our efforts. 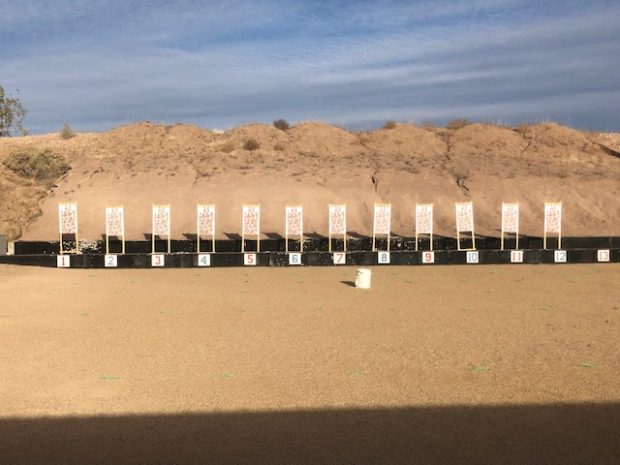 Range set up for my first class

Below are some random insights and commentary from the weekend.

Timing Issues.  Revolvers go out of time when shot a lot (or with very heavy loads).  When a revolver is out of time, the cylinder doesn’t perfectly line up with the barrel and part of the bullet gets shaved off by the forcing cone when firing.

In my retention shooting class, I had students shooting from a thumb/pectoral retention position while covering the head with the off hand.  I had two students injured (minor cuts) by bullet frag from mistimed revolvers in my class.  The lead and jacket fragments hit the inside of their offside arms in retention position.

When your revolvers start shaving rounds, get them to a gunsmith.  And don’t cant the gun outboard in retention unless you want those shaved bullet fragments directed to your face or throat.

I got to hang out with my friend Bryan Eastridge (Oklahoma cop, CEO of EDC Belt Company, and host of the Off Duty/On Duty podcast.  Bryan gave me one of his belts to T&E (look for article soon) and provided excellent conversation.  He did a podcast covering the event that can be found HERE.

Bryan wrote some summary comments on his Facebook page which he allowed me to copy below.

1-Revolvers are capable.
2-We need to study history before we make “conclusions” about gear etc.
3-I can still run a wheel gun but the manipulation skills are perishable (loading, clearing etc).
4-Gunsite is a gem and Jeff Cooper an American Treasure

5-Old Cops are a fraternity and a really badass one. Coast to coast we’re all alike. We’ve all been screwed over, ignored, walked on, passed over, outcast, burned out, beat up etc. Most of the peeps I’ve met teaching away from an agency all have similar stories. But you will never be the prophet of your own village….. and accepting that makes it easier to accept and most importantly move on.”

Wilderness Tactical- Wilderness updated the old “Renegade” ankle holster and I really like it.  I carried a Renegade in my early cop days and I think that the new modifications make it a top choice for revolver ankle carry. 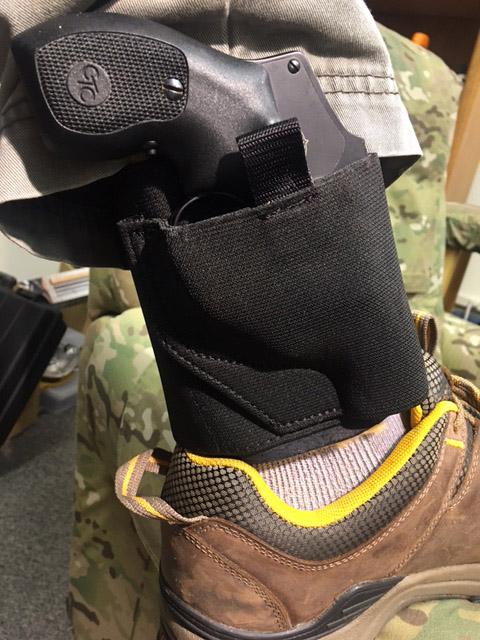 Simply Rugged Holsters– I got to meet Rob Leahy in person after following him online for many years.  He makes some of the best leather holsters in the business.  Check out his stuff HERE. 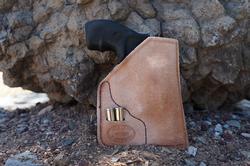 One of Rob’s pocket holsters

Besides getting to meet Rob, I also got to meet Caleb Giddings in person as well as a whole bunch of other folks I had only known via the internet.  That was one of the coolest aspects of the training class for me. 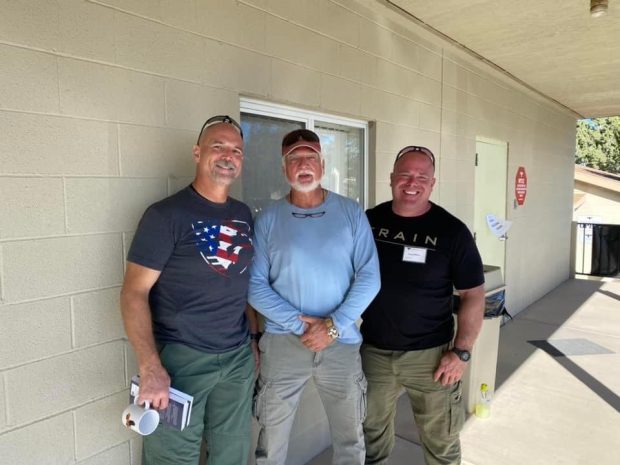 With Chuck and Doc Williams

Flashlight Issues- Many of the modern two handed flashlight techniques used with autopistols don’t work as well with revolvers.  Pressing the light up against the frame or barrel of an autopistol doesn’t cause problems.  But the same technique may impede the revolver’s cylinder from turning.

Something else to consider is that it is relatively easy to slam a new magazine into the butt of your autopistol in the dark.  It’s much harder to line up five or six bullet noses from a speedloader into your revolver in low light.  If you carry your revolver in the dark, it’s worth your time to figure out how to integrate a flashlight into your shooting system.

Ballistic Gelatin Tests– Chuck Haggard did his standard ballistic gel test at the roundup.  He shot a large variety of revolver defensive ammo through four layers of denim into ballistic gelatin.  There were no surprises.  Almost none of the .38 defensive ammo expanded through the denim.  The value of using wadcutters for defensive rounds was apparent.  If your high dollar hollowpoints look like wadcutters after penetrating heavy clothing, why not just carry the wadcutters that shoot to the sights and have minimal recoil?

Speaking of stopping power, I was there when Chuck described his observations about musket balls and HST hollowpoints.  Thanks to Caleb for expertly writing that up.

Chuck mentioned two points of interest.  One is that the new Federal Punch .22 defensive ammo didn’t perform well out of a snub and shooting through denim.  The rounds averaged only about nine inches of gel penetration.  The Velocitor rounds penetrated deeper.  There may be some sensitivity to temperature happening with the Punch rounds.

The second is that the Speer Gold Dot 124 grain hollowpoint regularly expanded when shot through a two inch 9mm snub. 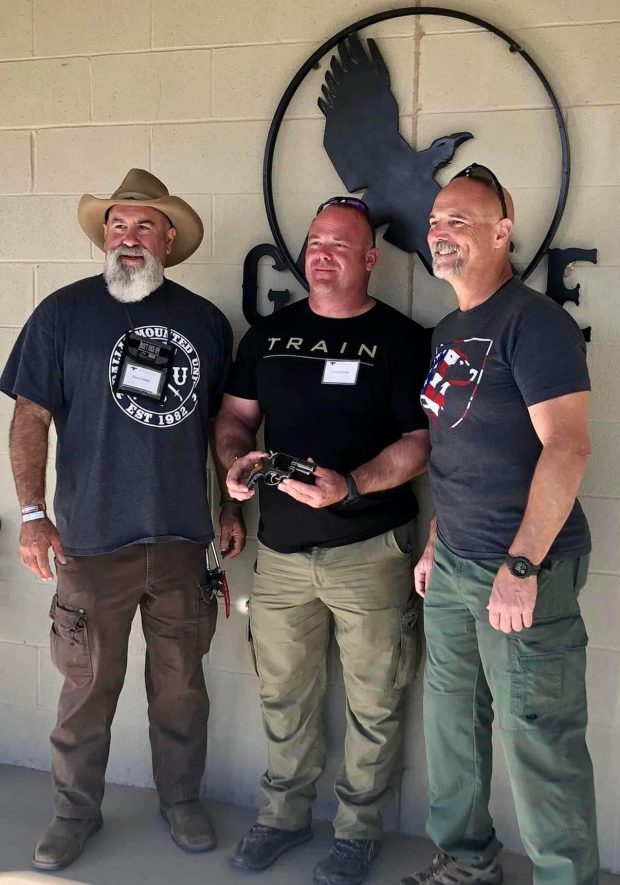 Chuck, Darryl, and me with Pat Rogers’ duty gun.

I tried some new speed strips in the class.  I was hopeful when I found them so cheaply on Amazon.  Don’t buy the Adoreal brand strips.  Utter garbage.  The rubber is too soft and kept dumping rounds out of the strip into my pockets for the whole weekend.  I had bought a bunch.  They all went into the trash after this class. 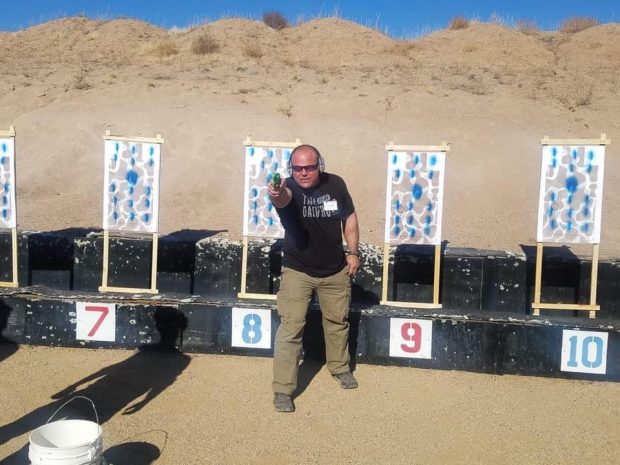 Demonstrating a 1-handed shooting position in my class

I look forward to going back to Gunsite for the same event next year.  It is already open for registration.  If you plan on going, hit the link below.  I think it will sell out quickly.  I hope to see some of you there!