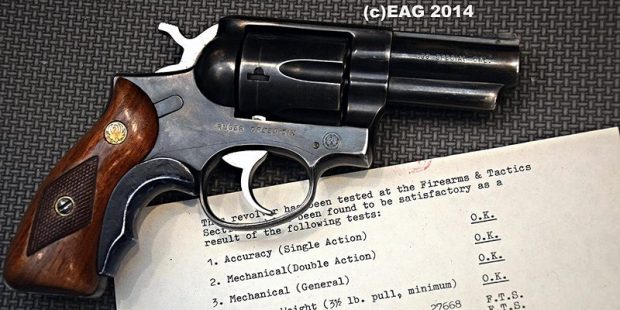 Last week I was honored to have been invited to teach at the annual Pat Rogers Memorial Revolver Roundup organized by Hardwired Tactical.  It was a weekend training event focused solely on using the revolver.  Instructors Darryl Bolke, Wayne Dobbs, Mark Fricke, Chuck Haggard, and I all taught three to four hour specialized blocks on revolver use to a class of 25 students.  This year’s event sold out in 27 minutes. 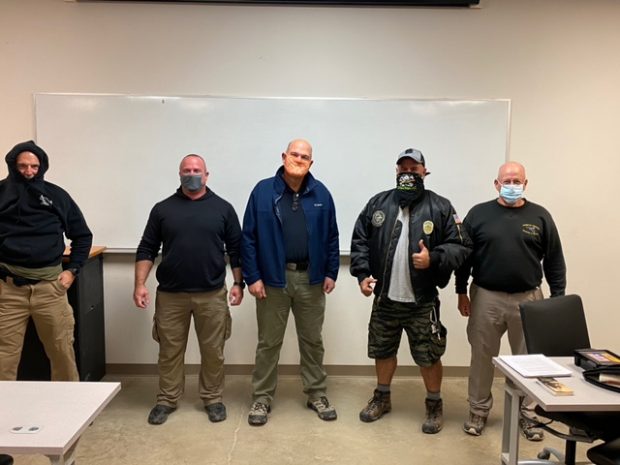 I watched a lot of students shoot a whole lot of bullets out of revolvers in one weekend.  Here are the things I noticed.

Most people don’t practice with revolvers at every range session.  Even the dedicated revolver shooters in this class generally carry autopistols for self defense.  How does one know how much time to devote to revolver practice on the range?

I used a  segment of my block of instruction to have the students shoot my “Revolver Proficiency Drill.”  It’s the drill I shoot cold with a revolver to assess my skill levels.  It’s 10 shots fired at 15 feet on a B-8 Bullseye.  The drill starts with the gun held at the low ready in the non-dominant hand.  The shooting sequence is:

The scoring standard is 90/100 points on the B-8.  I like to see my students do it in under 20 seconds.  I hold myself to a 15 second standard.  If I see my times increase or scores decrease, I know I need to spend more time with the revolver during my range training sessions.

Ken Campbell (CEO of Gunsite)  won the class shooting competition on my drill. 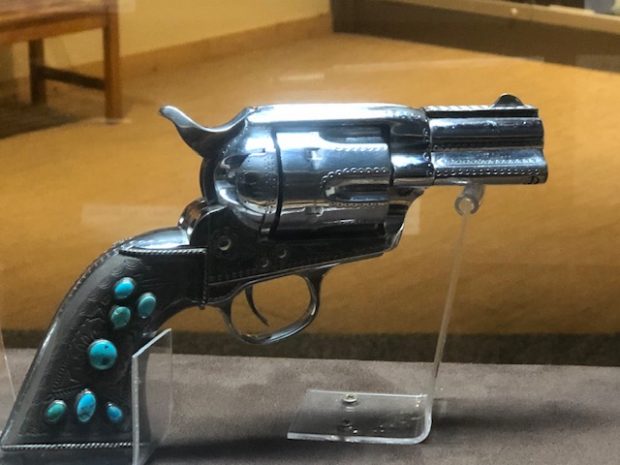 After the class I stopped off at the Texas Ranger museum in Waco. This was my favorite snub revolver on display. Carried by Ranger “Lone Wolf” Gonzuallas.

There is a big difference between a J-frame and a K-frame (or Ruger SP101, Colt Cobra, or Kimber K-6).  Most students brought two guns, a larger revolver with which to do the majority of their shooting and a small J-frame to occasionally use in the drills.  When the students broke out the J-frames, scores dropped and reloading drills seemed significantly more difficult.

The J-frames fit great into a pocket, but they don’t perform nearly as well as the larger revolvers for serious social work. 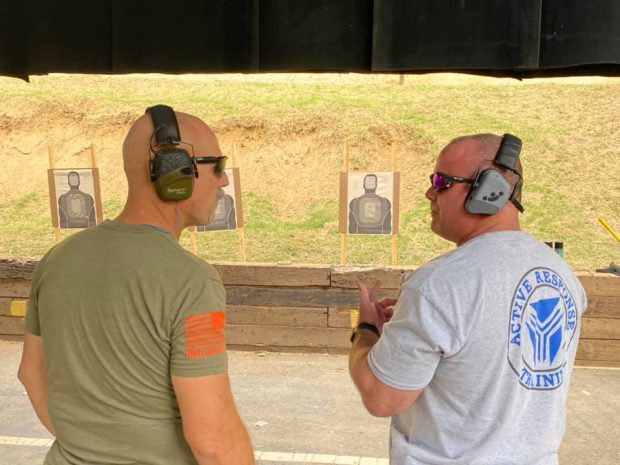 Chuck and I solving the world’s problems.  Thanks to staff medic Caleb Causey for the photo

Malfunctions are common with revolvers if you shoot them enough.  Uneducated revolver enthusiasts often state that revolvers never malfunction.  That’s simply not true.  I saw a lot of revolver malfunctions over the weekend.  High primers, loosened ejector rods, and gunpowder debris under the extractor star were the most common culprits.

Your practice sessions should include recovering dropped cartridges from the ground.  I can’t tell you how many times I saw students retrieving rounds dropped on the ground.  If the shooter was reloading with speed strips and failed to seat the cartridges deeply enough in the cylinder, forcefully peeling the strip away caused cartridges to go flying. 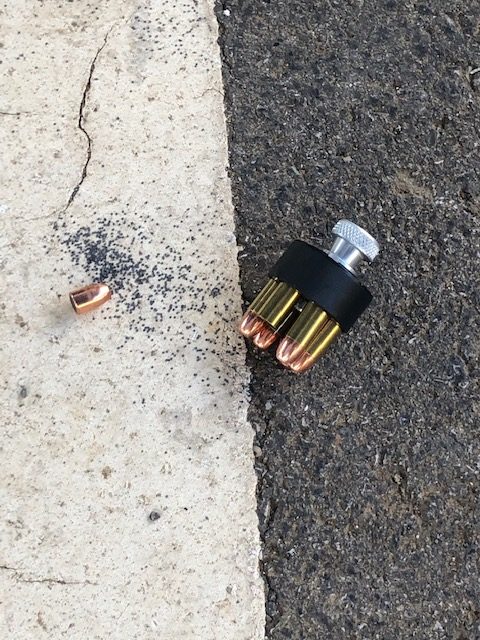 This speedloader spill caused a bullet to pop free of the case. Remington factory ammunition.

“Museum guns are the last ones to be banned.”  This is a point Darryl made several times over the weekend.  Many students were taking the class to become more proficient with a revolver in the event semi-automatic handguns become more restricted in the future.  Maybe taking revolver and pump shotgun classes might be a good use of your training time if you anticipate future gun bans.

Having seen hundreds of bullets pulled out of actual bodies, Chuck says that the bullets fired into humans generally look most like what he pulls out of the gelatin after passing through the heavy denim. 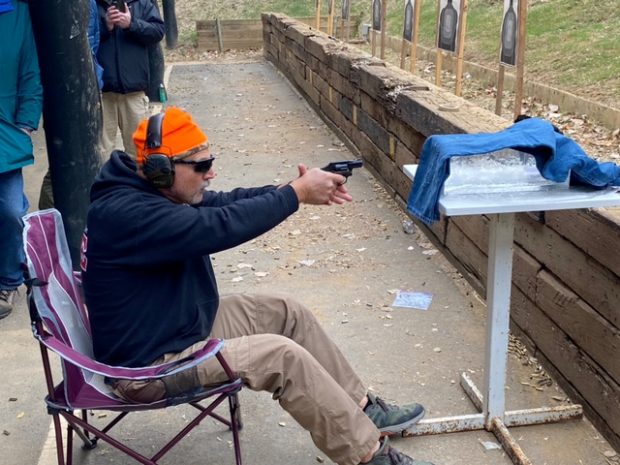 What’s your favorite snubby defensive round?  Chances are it’s in the photo below.  Not quite the pretty mushrooming you see in the advertisements. 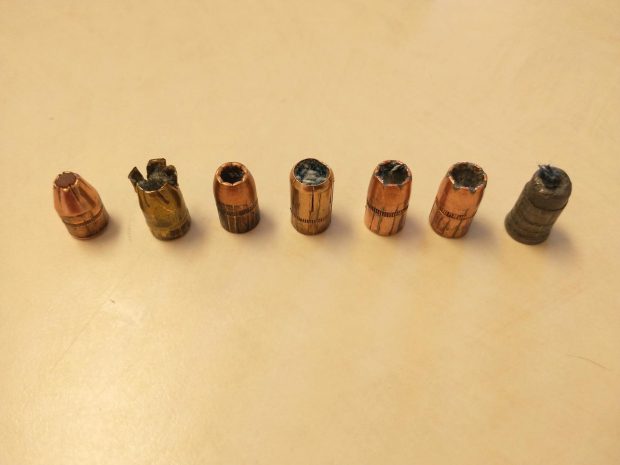 Now compare those results with the photo below of various 148 grain target wadcutter rounds recovered from the gel.  Not much difference, huh?  That’s why many snub experts recommend the wadcutter as a defensive round.  In tissue, performance is similar to premium hollowpoints.  The wadcutters have less recoil, are cheaper, and often shoot closer to the point of aim.  They aren’t a bad choice. 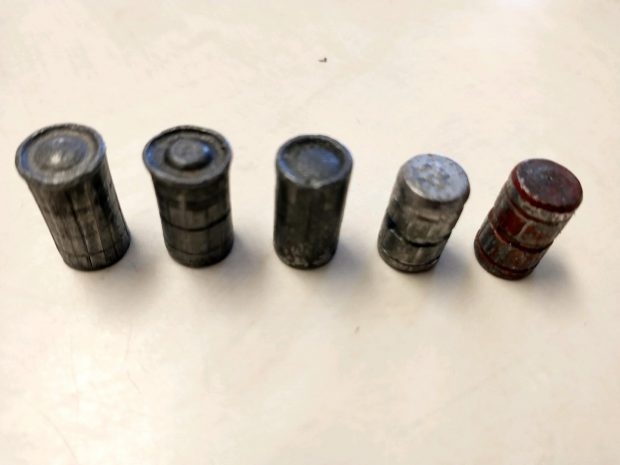 I will note that wadcutters tend to be slower to load using strips or speedloaders.  The wadcutters do not defeat auto glass as well as the bonded hollowpoints either.

If you missed it, the Revolver Roundup will be held again next year.  The founders are negotiating for a date at a much larger facility.  If they are successful, the event will expand significantly with more instructors and more students.

If you are interested in learning more about the event, listen to Michael Bane’s podcast covering his experiences there.  I’ll be back.  I hope to see some of you revolver shooters next year.