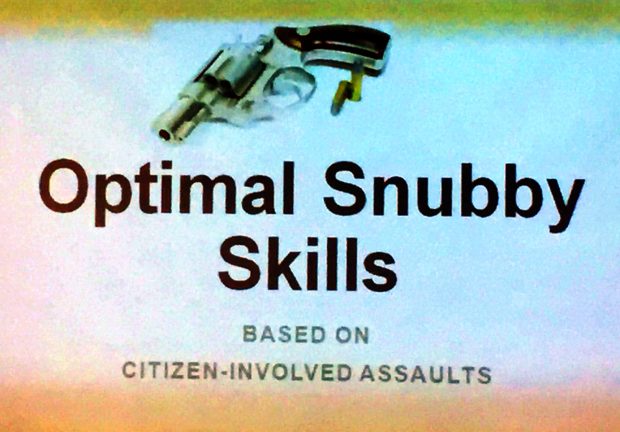 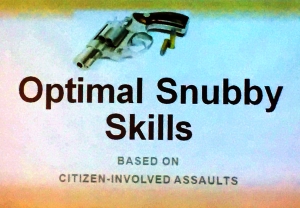 Last weekend I had the honor of attending famed instructor Ed Lovette’s final class before retirement.  Ed was a police officer in the 1970s eventually working his way into a position teaching firearms and officer survival tactics at his state police academy.  From that position, he was recruited by the CIA to become a paramilitary operations officer in some of the most hazardous places in the world.  He did work in Latin America, Africa, and the Middle East before retiring in 1998 to work various consulting and training jobs around the world.  In his CIA job he worked in both the intelligence capacity and in training local CIA operatives and embassy security details.

The interesting thing about Ed is that his chosen weapon during all of his undercover CIA work was a snub nose .38 revolver.  He was given the option of carrying the snub or a Browning Hi-Power (the two issued guns of the time).  Ed chose the revolver for its concealability.  His “Optimal Snubby Skills” class was designed to impart the lessons he learned in hazardous overseas assignments while armed with only a .38 snubnose revolver.

The class was organized by my friend Dave Spaulding from Handgun Combatives and was held at a rented police shooting range in southwestern Ohio.  The facility had both a classroom and a 10-lane, well ventilated indoor shooting range.  Twenty students attended the class.

The best way that I can describe the totality of the class was that Ed attempted to share the absolute best survival strategies he has learned in more than 40 years working in very dangerous assignments.  Ostensibly, it was about effectively using a snub revolver, but we came out of the class with a smorgasbord of information about tons of personal safety topics in addition to learning how to shoot a snubby.

Ed started his class with a PowerPoint presentation discussing his research into defensive firearms uses by armed citizens.  He has amassed a library of thousands of individual accounts of interpersonal violence and crunched the numbers to find out what we could expect in a “typical” attack. 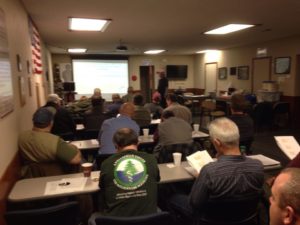 Classroom Lecture from Handgun Combatives Facebook page.  I’m sitting at the back of the class where I belong.

Ed found that in the majority of the cases he investigated, successful interventions were made by relatively untrained individuals, who often had to first obtain a firearm from an off-body storage location.  Most attacks occurred closer than 10 feet away and were perpetrated by a single, young, male offender who was unknown to the defender.  The most frequent location for the confrontation was inside the defender’s own home and the majority of attacks occurred between the hours of sunset until 3:00 am.  Physical contact between the defender and attacker before the gunfight was relatively rare, but exceptionally violent when it did occur.  The attacker’s most common response after being shot was to stop the attack and run away.

The most common gun used by the defender was a .38 revolver.  An average of three shots were fired in each incident and Ed did not find a single incident when the defender reloaded his weapon during the conflict.  It was rare that the defender had any formal training, used cover, or employed any less lethal alternatives before shooting.  Almost all shots fired were done so in the standing position.

Using this data, Ed explained that we would be focusing our training efforts for the weekend preparing for the situations he most commonly identified in the study.  Most of our shooting would happen around the 10 foot mark from the standing position and involve three- round strings of fire.  reloading would be covered, but would not be stressed as it is unlikely to happen in real life incidents.  With that briefing, we hit the range.

We started shooting with a “warm up” course of fire.  Ed explained that many of his students rarely use a snub revolver in practice and their skills are often “rusty.”   He wanted to make sure we were all up to speed on the basic aspects of shooting the snub revolver before branching into more complex topics.    The first string of fire was at the longest distance we would shoot in the course: seven yards.  We worked single shots from the ready position to get the feel for the trigger before moving to five and three yards to shoot faster strings of multiple rounds.  Ed patrolled the shooting line during these drills, identifying common shooting errors and explaining remedies to the class between strings of fire.  As we shot, Ed (assisted by Dave Spaulding) gave us tips for better gripping, better trigger control, and how to reload more quickly using speedloaders.

After our ‘warm up,”  we moved into shooting from two different ready positions and then one retention position.  We worked shooting at partially exposed targets, hostage targets, and targets to simulate a criminal attacking a family member in the home.

Ed then taught us his basic drawstroke and he shot all the remaining drills for the day from the holster.  We worked “failure drills,” head shots, “burst fire” techniques, and multiple targets.

After breaking for lunch, Ed began covering auxiliary personal safety topics, starting with the use of knives.  He showed a video produced by Ka-Bar that displayed various knives’ lethality against animal carcasses.  Ed is a huge advocate of using a centerline carried fixed blade knife (like the Ka-Bar TDI) to augment the snub revolver in the event that the gun is shot empty or if the defender cannot access the gun during the fight.

Even though I was a student in the course, Ed asked me to present some material on integrating empty hand combative skills into the gunfight.  I was honored by the request and covered striking techniques to facilitate the draw, accessing the weapon from the ground, using the revolver as an impact weapon, and accessing the weapon from positions of disadvantage (like being choked or bear hugged from behind).  We split the class into two groups and Ed taught some small knife skills while I taught the physical stuff.  The groups switched, we shot a little more, and that took us to the end of day one. 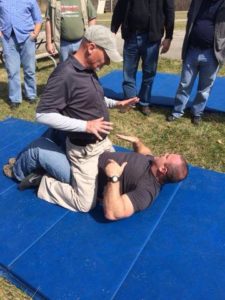 Here I am showing some of the problems involved with accessing the snub from a grounded position as Dave Spaulding beats me up. Image stolen from Dave’s Facebook Page.

Day two started with watching part of Craig Douglas‘ DVD about “Managing Unknown Contacts.”  Craig is one of the best in the world at explaining pre-assualt warning signs and how to physically manage people who approach you on the street.  Ed explained that these skills were critical to acquire to provide more time to recognize an assault and effectively counter it.

The class was then treated to a presentation by Michael de Bethencourt, a true mad genius of snub revolver skills.  Michael’s presentation was unconventional, but as usual, extremely thought provoking.  I firmly believe that no one on the planet has thought about the use of the snub revolver more than Michael.  His presentation covered loading single rounds, malfunction clearance in snubbies (yes, revolvers can still malfunction), the use of speed strips, one handed reloading options, and countering a close quarters cylinder grab. 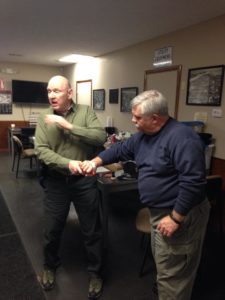 We then went back to the range and did some more draws and multiple shot firing sequences at three and five yards.  Ed then covered one handed use of the snub, putting us into situations where we had to draw and shoot single handed after simulating an injury to our weak hand, one handed shooting using a flashlight, and one handed shooting while using the off hand to protect a family member.  We then did some more shooting against partially obscured targets and from a position as if we were seated at a table.  During each exercise, Ed shared his insights into optimal use of the snub and how to covertly get it into action in a robbery, active shooter, or hostage taking event.

After lunch, we adjourned in the parking lot where Ed taught some vehicle based techniques using the snub revolver.  We all practice drawing and simulated shooting from the driver’s seat of a car.  Ed also covered some material on fast vehicle getaway driving techniques.  Myself, Dave Spaulding, and Chuck Haggard from Agile Training then all covered our preferred options for fighting off a robber or carjacker who is seated in your car’s passenger seat. 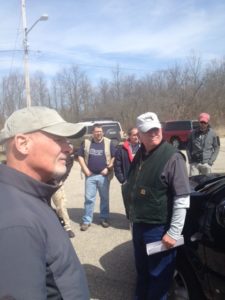 Ed and Dave answering students questions about fighting from a vehicle. From Handgun Combatives Facebook Page.

We ended the day with a drill that combined everything we had worked on all weekend.  The range had a robotic target…think about a humanoid torso mounted onto a rugged remote control car base.  The robot could be remotely controlled to provide a true moving target that can attempt to use cover, charge, or flank you.  We had to shoot the moving target form various positions of cover while moving and reloading.  As we reloaded, the robot would attempt to flank us, requiring the students to be aware downrange and constantly adjust their positions of “cover” to avoid the robot.  It was a fun drill and a real crowd pleaser. 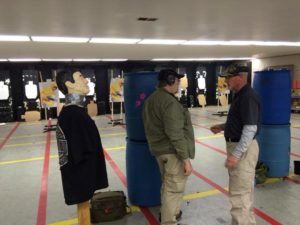 Dave briefing a student before the “robot” drill. Robot on left. From Handgun Combatives Facebook Page.

The class was an amazing success.  Not only did I get to hone my snub revolver skills, I also got to hang out with some of the best trainers and fellow students that anyone can imagine.  A lot of folks like the “run and gun” style of the tactical carbine classes that are all the rage nowadays.  I like them too.  But I see those same students stow their carbines after the class and strap on a J-frame revolver for personal protection without having any real skills to run their revolvers.  If you carry a revolver, an occasional class like this one will provide an alternate perspective you aren’t likely to find in any of your favorite “tactical guru’s” classes.

Since Ed is now retiring and you won’t find him teaching anymore, you can learn more by picking up his book The Snubby Revolver.  He also co-authored the excellent text Defensive Living with Dave Spaulding.