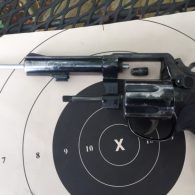 Because I see occasional squib loads when shooting .38 special ammo, I start every snub revolver class by allowing the students to fire a primed case to feel the difference between a squib and a full power round. It’s an idea I stole from Micheal de Bethencourt.     I got this email last week: […]

Written by Greg Ellifritz Last weekend I had the honor of attending famed instructor Ed Lovette’s final class before retirement.  Ed was a police officer in the 1970s eventually working his way into a position teaching firearms and officer survival tactics at his state police academy.  From that position, he was recruited by the CIA […]