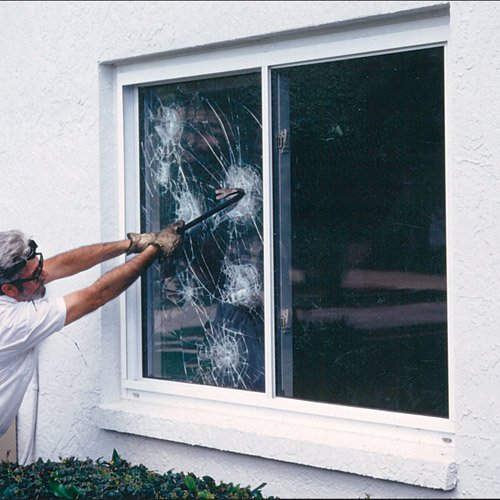 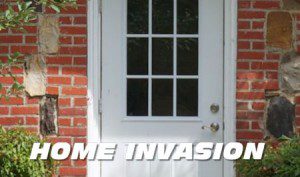 I was working day shift police patrol when a call went out at about 9:00 a.m.  I was dispatched to a very large house in a nice neighborhood. The dispatcher said that the resident had called to report suspicious activity.  The resident said that she had heard someone banging on her back door.  She was worried because no one ever came to the back side of her house.  She thought that the knock was a burglary attempt and she had locked herself in an upstairs bedroom until we could arrive.

This isn’t an exceptionally unusual call.  I work in a very wealthy city that has a high percentage of elderly residents.  Many of these residents live alone, are disabled, or suffering from dementia.  They tend to call us fairly often whenever they think something strange is happening.

As I drove to the call, the dispatcher gave me an update.  They had received an additional call from the resident’s alarm company stating that a lower level door had been opened.  The dispatcher was still on the phone with the resident.  She hadn’t moved from her upstairs bedroom and no one else should have been in the house.

Another officer and I arrived within a few minutes.  As we checked the perimeter of the house, we noticed that the lower level rear door had been kicked in.  The door was standing open and most of the door frame was lying on the floor inside the house.  Not knowing if the burglar(s) were still inside, we called for additional units to secure the perimeter as we searched the house for the intruders.

We cleared the lower levels and worked our way slowly upstairs until we reached the caller’s bedroom.  We had the dispatcher tell her that we were right outside her door and that it was safe to come out.  She did, and was relieved to hear that the intruders had left the house.

After we assured the resident’s safety, we began an investigation of the incident.  Besides the rear door being kicked in, there had been an additional attempt to break a rear window.  The burglars picked up a pointed rock from the homeowner’s landscaping and made three attempts to bash the window.  There were obvious marks and chips, but the glass didn’t break.  We surmised that the burglars’ attempts to break the window were the “knocking” sound the resident heard.

Frustrated with their inability to make entry, the burglars dropped the rock and made another attempt by kicking in the door.  This time they were successful.  The door opened easily, but the burglar alarm was triggered in the process.  Since nothing was taken from the house, we believe that the burglars fled after being scared off by the alarm.

The homeowner here was quite fortunate.  Other than the expense of having to replace a window and a door frame, she didn’t suffer any financial loss.  Even though she wasn’t hurt, the burglary attempt clearly traumatized her.  She was visibly scared and shaking.  The thought that someone could so easily invade her house is likely to cause some disturbing thoughts for her in the future.

Unfortunately, events like this are quite common.  How can you ensure that you aren’t victimized in a similar manner?  Let’s take a look at a few of the lessons we can learn from this incident:

1)      Don’t make it easy for criminals to break into your house.  Given enough time and effort, a burglar can break into just about any location.  Most, however, will look for the easiest targets they can find.  The burglars here initially attempted entry by trying to break a window using a handy piece of landscape rock.  Take a look around your house.  Are you providing the burglar with the tools he needs to break in?

I can’t tell you how many houses I see with ladders leaning up against the exterior wall, tools like hammers and axes laying around in the yard, or concrete blocks being used as improvised steps leading up to a back door.  All of these items make it really easy for a criminal to force entry. 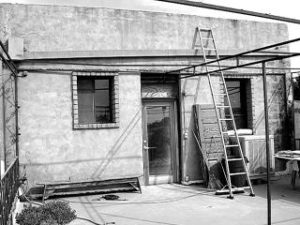 How easy are you making it for criminals to get into your house?

2)      Secure lower level windows.  Although this burglary attempt involved force, many of the ones I see do not.  Most often criminals enter through unlocked lower level windows and doors.  Make sure any entry point that a criminal can reach from the ground level stays locked.

If you are concerned about criminals breaking your windows to gain entry, I would suggest visiting your local home improvement store to look at ways you can better secure them.  “Hurricane Film” is readily available and easy to apply.  It provides a transparent plastic coating over the windows that will resist all but the most determined efforts to break the glass.  Decorative and removable steel bars are also available for both the inside and outside of your windows. 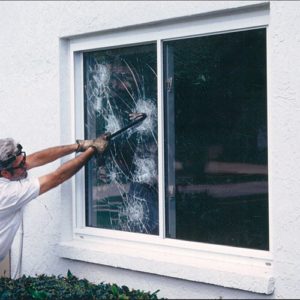 3)      Invest in good exterior locks.  This woman’s door was opened with a single kick.  She had a deadbolt on the door, but the strike plate (reinforced hole into which the deadbolt slides) was not secure enough.  The deadbolt stayed extended but the entire door frame was knocked off.

Make sure each of your exterior doors has a deadbolt that is sturdy and extends at least one inch into the door frame.  Install the strike plate and door hinges with extra long (three to four inch) wood screws that reach all the way into the door frame.  Additionally, there are metal reinforcing plates available for both the boor and the strike plate area to prevent kick-ins.  They are worthwhile if you think you are likely to experience a door kick. 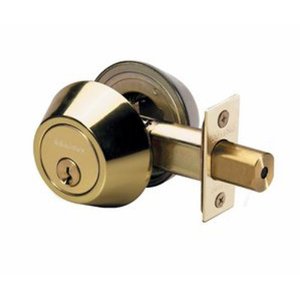 Make sure the deadbolt is at least 1″ long

4)      Have good locks on your safe room or bedroom door as well.  The homeowner here was hiding in a bedroom with a hollow core door and no deadbolt.  If the criminals had wanted to get to her, it would provide no resistance at all.

I personally upgraded my bedroom door to one that is constructed of a solid wood and has a deadbolt.  It isn’t impenetrable, but it will take a lot of effort to break in.  The $100 I spent doing so was a good investment.

Also make sure you have a way to call for help in your safe room.  Phone contact with the resident was critical here.  I suggest that you have both a landline phone and a cell phone in your master bedroom in case of power outages or if the criminals cut your phone line.  When you upgrade your cell phone, keep your old one on a charger hidden in your safe room.  Even if the phone is deactivated, the carrier must allow it to connect to 911.  The phone won’t work for any other number, but federal law requires that it still connect when dialing 911.

5)      Know your neighbors.  After this incident we interviewed the caller’s neighbors to see if they had seen anything.  One alert neighbor gave us the description of a car she saw rapidly departing the victim’s driveway just before our arrival.  That description might give us enough information to make an arrest.

You should pay enough attention to know when something is “out of place” at your neighbors’ houses.  You should encourage them to do the same for you.  If you or a neighbor sees something suspicious, make a call to the police.

Most criminals are lazy.  They are looking for the absolute easiest place to acquire drugs, cash, and jewelry.  A few simple interventions like I suggested above will ensure that you won’t have to suffer like the resident in this case.  Make your house a harder target and you will be less likely to suffer a loss!