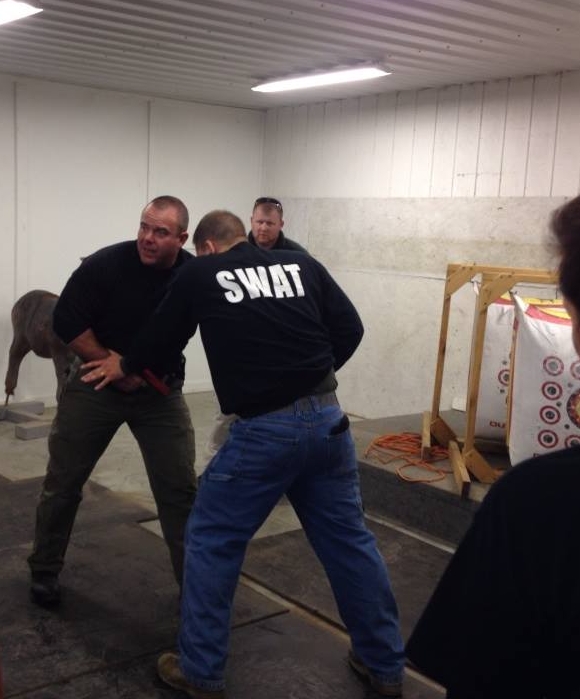 In the last few weeks my social media news feed has been deluged with videos of inept police officers who cannot fight.

Most citizens assume that the police officers who patrol their neighborhoods are competent fighters.  Those people couldn’t be more wrong.

Depending on the state, police officers usually get somewhere between 40 and 60 hours of training in “defensive tactics” in the police academy.  A lot of that training is classroom book learning.  Much of it is ineffective “pressure point control tactics.”  Very little of it consists of actually teaching officers how to apprehend resisting bad guys or save their own asses in the event that the offender attacks with life threatening physical force.

Cops are not effective fighters when they graduate the academy unless they were already competent fighters from their own efforts before entering the academy.

Once the cops get out of the academy, about 50% of them will NEVER get any updated defensive tactics training.  Lots of states have no requirement for physical in-service training outside of completing an annual shooting qualification course.

1.Lack of trained personnel.  In our state, getting certified as a DT instructor requires a two week course.  Many agencies cannot afford to pay an officer to attend or to cover the overtime required to man his shift while he is in training.

The two week class does not create competent instructors.  It takes many years to become truly competent as an instructor who is well versed in teaching physical control tactics.  Even if cops go get the instructor cert, most will not be able to adequately train their personnel solely using the knowledge they obtain in the instructor class.

2. Lack of time.  In most martial arts programs, students practice several times a week.  Most develop some level of proficiency after one or two years of this regular effort.  No agency on the planet can afford to train all of its officers three hours a week for two years

3. Injuries.  Training in the fighting arts is injury intensive, especially for those who are out of shape and unconditioned.  Most of our cops are sadly out of shape and extremely poorly conditioned.  If a hardcore fight training program was implemented, many would be injured within the first few sessions.  There wouldn’t be enough healthy cops to cover patrol duties.

4. Motivation.  Training in the fighting arts is hard work.  Many officers don’t have the motivation to do it.  Officers are spoiled by a normalcy bias.  Only about two percent of police arrests involve any force at all.  When those arrestees struggle, most aren’t really trying to hurt the officer.  They are trying to escape or save face in front of their buddies.  When the criminals aren’t really trying to hurt the officers, the officers win almost all of those encounters.  Those “wins” elevate the officer’s sense of efficacy.

Those officers say: “I’ve been fine in all the fights I’ve had in the last 10 years.  Why do I need to do all that training.”

In reality, the cops have never had a real fight with a motivated attacker who is trying to kill the officer.  They simply don’t know what they don’t know.

The reality of the situation is that most cops won’t become competent fighters unless they train on their own time in a contact-based martial art.  Only five to ten percent of officers choose to do that.  That means 90-95% of the cops out patrolling the streets can’t fight any better than the average untrained citizen.

Don’t believe me?  Take a look at these videos.

Here’s more video from when a Fort Lauderdale Policewoman was attacked by a man accused of trying to leave the scene of an accident. She’s okay. He’s being charged w/aggravated battery on and officer and resisting arrest w/violence. @wsvn #Exclusive pic.twitter.com/yJ0n2cfANr

Please note that I didn’t have to search for these videos.  These links were all shared in my social media feeds in the last week.

The reality is that while there are some cops who are extremely well trained and competent, most couldn’t save themselves in an exceptionally violent physical attack.  Why are you depending on them to save you?

My friend Dave Spaulding says: “You must be an active participant in your own rescue.”  Truer words have never been spoken.

If you want to keep yourself and your family safe, you can’t simply outsource your protection to others.

It’s time to put in some work.

Most cops won’t get physical fighting training like this unless they pay for it themselves and do it on their own time.