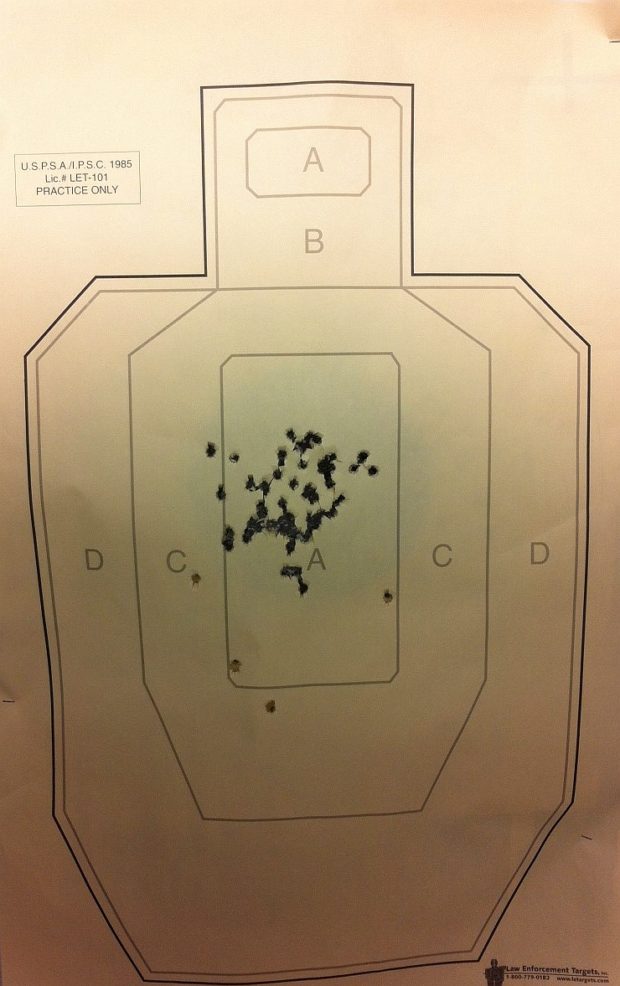 To the amazement of my armed citizen friends, most police qualification courses are little more than a joke.  With a full day’s worth of pistol training, I can get almost everyone to the point where they can pass their state’s police qualification course.  In Ohio, our course is so easy that I blindfolded one of my retired officers and had him shoot the course.  He passed.

Nevertheless, police qualification courses serve as a fairly decent benchmark of competency for the average armed citizen.  Without extensive practice or some professional coaching, your average plinker isn’t likely to pass.  I regularly advise students to shoot their local police qualification course, have it signed and witnessed by a shooting partner (or even better a police instructor), and save the target.  It’s an idea I got from Massad Ayoob.  If you have to shoot someone in self defense and your abilities are questioned by the court, it makes a pretty powerful statement to say:

“As a responsible gun owner, I didn’t feel comfortable carrying my gun in public until my skill level was at least as good as the police officers who patrol my community.  I took several training classes and I successfully completed the state’s police pistol qualification course.  Here’s the target to prove it.”

That might shut down any line of questioning that disparages your skill set or paints you as someone who is “reckless” or “wants to shoot someone.”

The only courses of fire that may have more perceived value to a jury are those shot by various branches of Federal law enforcement.  While some citizens in your jury pool might have some bad experiences with local cops, agencies like the FBI usually have a sterling reputation.  It couldn’t hurt to be able to pass the FBI pistol qualification standards.

In fact, using the FBI standards might make a lot of sense for the average armed citizen.  The FBI recently changed their qualification course to better reflect the scenarios where agents have fired their weapons.  Since the FBI agents are plain clothed and carry concealed, the situations where they use their guns are very similar to the situations that the average armed citizen might experience.

The course is 60 rounds total.  All draws must be from concealment.  The FBI uses their reduced sized QIT target*.  Any hit in the bottle outline counts as one point.  48 out of 60 total points are required to pass the course.  Here are the specifics: 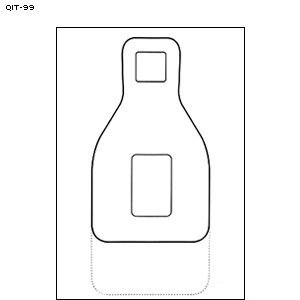 – 3 shots in 3 seconds, strong hand only

– repeat above for 3 more rounds

– 3 rounds strong hand only, switch hands, 3 rounds weak hand only in a total of 8 seconds

From Five Yards (12 rounds fired) (all shooting at this stage and during each subsequent stage is performed with both hands):

– repeat 3 more times for a total of 12 rounds fired

– repeat above for 4 more rounds

– 4 rounds, reload, then fire 4 more rounds all completed in 8 seconds

– repeat above for 3 more rounds

From 25 Yards: (10 rounds fired) (This stage requires the use of a barricade.  I use a cardboard target for simplicity and ease of carry):

– Move up to the cover and fire 2 rounds standing and then 3 rounds kneeling, all under 15 seconds.

That’s it.  I shot it from concealment using my Glock 19 9mm and Spencer Keepers’ appendix holster.  The times seemed very generous and I put all 60 of my hits on target.

As far as a qualification test, this one does a good job testing the most likely scenarios a defensive gun owner will encounter: a single bad guy at short to moderate ranges, firing between two and four rounds.  I would like to see any qualification also include close quarters retention shooting, at least one stage with multiple targets, and at least one stage shot in low level light in order to truly test ALL necessary pistol skills.

Give this one a try.  Have a shooting buddy witness your target.  Save it.  You never know when it might be handy to prove that you shoot as well as an FBI agent.