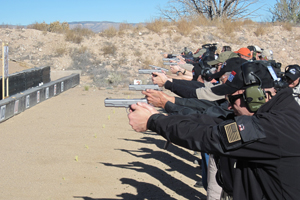 My friend Dave Spaulding recently wrote an article about the standard drills he uses to evaluate his students at the beginning of a training class.  The drills themselves serve as a great practice session if you work them for multiple repetitions.  Check out the article at the link below:

• One shot from the holster in two seconds

• One shot, slide closed reload, one shot in four seconds

• Six shots from their ready position in three seconds.

Dave then goes on to describe the version of “El Presidente” that he uses in his class as well.

“This drill is still used in classes at Gunsite (www.Gunsite.com) and I like it because it tests a number of essential skills in a short exercise. From a distance of 10 yards, 12 rounds are fired at three targets one yard apart. The targets should represent the high chest region.

I took those drills and organized a practice session.  I started out with my duty gun (Glock 21) and duty holster and ran one magazine (13 rounds) each for the first two drills.  I ran the third drill for two magazines worth of ammunition.  I did the fourth drill using all three mags (mostly because it was fun).  I finished off with three magazines worth of ammo on El Presidente.  It ended up being a nice 130 round practice session.  I used a blank 8.5″ x 11″ piece of paper for a target. 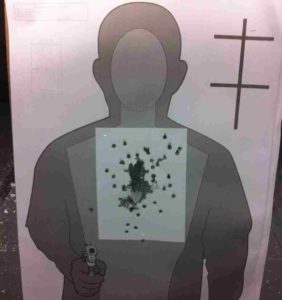 Target from the Glock 21. the 2 misses came when I was trying to push the “Bill Drill” time below 2 seconds.

After I was done shooting my Glock, I fired the same drills with my Kahr PM-9 from a concealed appendix IWB holster.  I finished up by running the drills (slightly modified) with my .22 S&W 317 snub out of an Alessi ankle holster.  I normally carry a S&W .38 snub in that holster as a backup gun.  I use the .22 for a cheaper shooting weapon with the same characteristics. 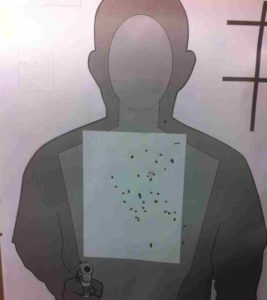 Target for the .22 revolver. Shooting this drill with a snub from an ankle holster creates a whole other level of difficulty!

I found the time restrictions somewhat challenging, but certainly possible.  Give the drills a try.  If you have less time or a smaller quanity of ammunition, I would suggest that you run all of the drills through once.  After that, look at which drills caused you the most difficulty (either by accuracy or time).  Spend most of your remaining practice ammo dialing in those skills.  We all like to work on what we are already good at, but the true practitioner will spend time improving the areas where he is deficient.  These drills will certainly identify your deficiencies.  Get to work on fixing them!