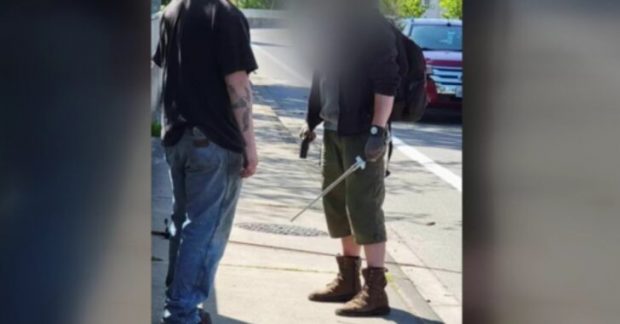 A few weeks ago I saw this particular news article and thought that the event it described would be worthy of discussion.  Read the link below.

For the sake of argument, let’s state the facts are as follows.

You are in a public park when you see a man walking his dog. The dog walker appears a bit mentally unhinged. He’s yelling and screaming at passersby. At one point he draws a expandable baton and starts chasing a grandmother and her grandchild while holding the baton in a menacing manner. You do NOT see him actually hit anyone with the baton.

You do not know and are not responsible for anyone the man is screaming at or threatening.

Question number one: Would you get involved at all?

Question number two: At what level would you intervene? Verbally, physically, less-lethal weapon, or firearm?

Really think about your answer.  Grandma is getting chased around the park by a crazy guy holding a baton.  What would you do?

The event continues.  You see another bystander attempt to verbally intervene. The crazy dog walker hits the bystander several times with the baton and sprays him with pepper spray from a device that looks like the firearm-shaped “pepper blaster.”

Question number three: Would you intervene to protect the bystander? If so, at what level (same choices as above)?

If you read the article, you will know that another bystander with a concealed firearm intervened by shooting in order to protect the man being struck with the baton and pepper sprayed. The crazy man died from his wounds.

I want you to think really hard about this one.  While the shooting appears to be objectively reasonable (impact weapon strikes to the head could be considered deadly force), I am certain that the shooting wasn’t absolutely necessary.  I want to use this article to discuss the difference between “reasonable” and “necessary” and why that distinction is important for your future well being.

To be clear, even though the two words are often paired together, the legal standard for use of force is being “objectively reasonable” not “necessary.”  “Necessary” implies that shooting the suspect was the only possible solution and implies that the shooter has information that may not be obvious at the time.  That’s a nearly impossible standard to attain.

Let’s give you an example.  You are approached on the street by a man who is pointing a gun at your face.  He says that he is going to kill you.  Would it be reasonable to shoot the man?   I would say “yes” and hope most of you would agree.

You shoot the man and the gun falls, breaking in half.  It was a plastic toy gun that looked identical to a real gun.  Your shooting was reasonable, but was it “necessary” to shoot someone armed with a toy gun?  Clearly not.

I encountered dozens of situations in my police career where it was reasonable to shoot, but shooting wasn’t the only way I could solve the problem.  I look back at the very first time I pointed my gun at another person.  I was working night shift and was called to a “peeping Tom” call.  The residents stated that there was a man in her side yard standing near a large tree as he peered into the caller’s window.

I pulled up to the house and hit her yard with the cruiser spotlight.  Sure enough, there was a man standing behind a tree and looking into her window.  I yelled at the man to come over and speak with me.  He ducked behind the tree, held his arms as if grabbing a long gun and shouted out “Get away from me.  I have a shotgun and will kill you if you don’t leave!”

He was holding his hands like he held a shotgun.  He told me he had a gun and threatened to kill me.  It was likely reasonable to shoot the man at that time.  I didn’t shoot.  Something seemed “off” about the whole incident.  I ducked behind my cruiser for cover and drew my gun.  I kept giving him commands until he came out from behind the tree.  No gun.  It turned out that he was a neighbor of the caller who was suffering from dementia and had escaped his house.  I returned the man home without incident.  I was glad I didn’t shoot.

Back to the case at hand.

I polled several of my Facebook friends, asking them the questions I posed above.  Almost 30 people commented.  Only six (most of whom were current or retired cops or military) were in favor of certain intervention .  Thirteen choose no intervention beyond calling 911.  Nine chose “maybe” depending on whether they were with their own families, and how badly the victims were being injured.  None of the folks who said they would intervene would have started with a firearm.

Still sure you want to shoot the suspect in this case?

I would not choose to intervene in this particular situation.  I’d call the police and I’d let them handle it.  Despite the bad optics of the scenario, NO ONE WAS GETTING SERIOUSLY INJURED.  Certainly the potential for serious injury existed, but listen to the victim being interviewed the next day.  Does he look seriously hurt?

I’m sure that getting pepper sprayed and hit with a baton was no fun, but I’ve been pepper sprayed more than 50 times and hit with every possible stick imaginable while teaching my impact weapons classes.  I’ve never been seriously injured by either.  I’m not going to risk imprisonment or financial ruin to prevent a stranger from being hit with a stick.

I don’t think pepper spray would rise to the level of lethal force in most courtrooms.  Read my discussion on that issue HERE.  Certainly strikes with a metal baton to the head may result in serious injury, but they often don’t cause such injuries in practice.  Watch some police videos where the cops are hitting folks with batons.  They aren’t doing much damage.

I’ve seen a couple of situations at work where cops have absolutely worn a suspect out with baton strikes and seen the suspect in court the next day walking without even a limp.  I’ve responded to lots of assaults over the years where people have been hit in the head with various impact weapons.  Sometimes such assaults cause a lot of superficial bleeding, but I’ve rarely seen one that resulted in the victim needing to spend the night in a hospital.

What most folks don’t understand is that it is relatively common for crazy people to go nuts in public and act violently.  This is a pretty frequent call that urban police officers will get several times a year.  In most cases it really isn’t a big deal to anyone except the person being attacked.  Even then, we rarely see someone seriously injured from such outbursts.  I’m not ready to risk my freedom or my financial nest egg in this political environment to save someone from getting a bump on the head.  I may be jaded and some may consider me selfish for such a response, but that’s the reality.

There is a chance I would intervene if one of the victims was truly helpless and in legitimate danger.  Let’s take a look at the grandma/grand kid here.  Note that the man chased them around, but didn’t actually hit either of them.  If a grandma and a young child could avoid the suspect’s strikes, how seriously was he really trying to hurt them?  We don’t know much about “grandma” here, but I’m betting many of you are picturing an invalid elderly woman.  That may not be the case.  There are a lot of reasonably fit and mobile 40 year old women who are grandmothers these days.

Would the age of the victim and her ability to avoid the attacker play into your engagement decision here?  It absolutely should.  It’s one thing if the suspect is beating an octogenarian confined to a wheel chair and something completely different if he was chasing around a younger woman in reasonably good physical condition.

It’s different if the kid is eight years old and can get away from the man as compared to an infant or toddler who couldn’t defend herself or escape.  All of these are considerations you absolutely must account for before taking a shot like this.

One other point to note…

The good Samaritan here only shot the suspect after the suspect used the “pepper blaster” type of OC spray.  Take a look at the photo again.  Note that the pepper spray device is shaped like a gun.  Our shooter might have fired because he believed that the crazy man was actually pointing a real firearm at the intervening bystander.

That factor would also increase the chances I’d intervene.  It’s one thing if crazy guy is chasing people around and screaming.  It’s something completely different if he’s about to touch off an active killer shooting rampage.

Folks, I would highly recommend that you avoid relying on pepper spray “guns.”  If you whip one of these out on the street to defend yourself, how many other people would mistake your pepper spray for a firearm?  There’s a good chance that you’ll be shot by an off duty cop or CCW carrier if you are pointing what looks like a gun at someone’s face in a city park.

There’s lots of stuff to unpack here.  Ultimately I predict that this will be ruled a lawful use of force.  I also predict that this shooting undoubtedly will negatively affect the CCW carrier for the rest of his life.  You don’t want to shoot someone unless that person absolutely needs to be shot.  When making a decision in a scenario like this, you will have just a few seconds to decide a course of action that will ultimately be judged by the media and the courts over the course of months or years.

My best advice to you is not to ask yourself “Can I legally shoot him?” in a similar situation.  Instead you should be thinking “I’m not going to shoot unless there are no other alternatives and an innocent person is being seriously hurt or killed.”  There’s a big difference between these two standards.

You may someday face a scenario where it may be legally allowable to shoot an attacker.  Before you take the shot, think about if it is something you MUST do instead of something you CAN do.

You win every time you avoid shooting someone in a situation like this.  In my mind it’s not worth risking jail time to protect a complete stranger from a few bumps and bruises.  Your mileage may vary, but I urge you to make your calculations carefully.