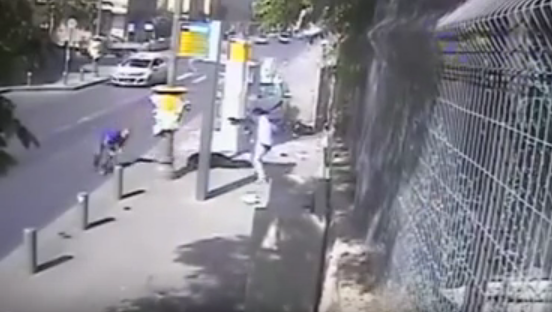 Undoubtedly, many of you have already seen the video above.  It was posted earlier this week and shows a terrorist in Israel running some people down with a car and then attacking others with a butcher knife.  The terrorist was shot down by an armed citizen.

A lot of folks mentioned the fact that it took quite a few rounds to bring the guy down.  Sometimes that happens in a gunfight.  At one point, the terrorist went down and then came back up to throw the knife.  That sometimes happens too.  Suspects who have been shot often collapse because they have a drop in blood pressure.  Not enough blood is making it to the brain, so they become unconscious.  As soon as the suspect falls and hits the ground, the heart doesn’t have to pump so hard to fight gravity. Blood flow returns to the brain and suddenly, the suspect is conscious and fighting again.  Expect that to happen any time you are involved in a shooting.

Don’t be in a hurry to run up on the downed attacker, especially if he is armed with a contact weapon.  Seek distance and cover instead.  Don’t be in a hurry to kick his weapon away like this defender did.  Circle towards the suspect’s feet, not towards his head.  That way if he wakes up, he’ll have to look around a couple seconds to find you.  Seek cover.  Get everyone else away from the suspect.  Wait for backup (or police arrival) before approaching.  This article contains some tips for approaching downed suspects.  It’s written for police, but it is useful for armed citizens as well.  Thanks to Chief Jeff Chudwin for sending me a copy of this excellent piece of research.

Be careful out there.