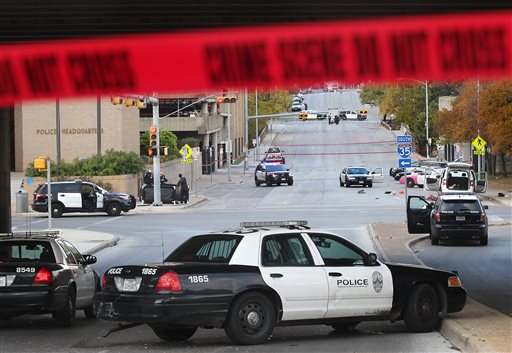 On the day after Thanksgiving, a man used a rifle and improvised explosives to attack four buildings in downtown Austin, Texas. Amazingly, despite firing approximately 200 rounds in about 10 minutes, he didn’t kill or injure anyone.

Because no one was injured (it was 2:30 am), the crime received very little national media attention outside of the police community. Police officers took note of the shooting because it was ended by a single shot fired by Austin Police Sergeant Adam Johnson. The shot was unique because of the extended range (312 feet) and the fact that the mounted officer fired it in the dark, one handed, while holding the reins of two horses with the other hand.

Even though no one was injured in the attack, there are several useful learning points to note:

1) It was planned as a mobile attack. The shooter rented a van to carry his ammunition and explosive devices. He attacked four separate buildings, but had a map highlighting 34 total targets. It is assumed that he planned on using the van to drive to each target sequentially.

With the frequency of active killers going mobile, it is necessary for officers to place a greater emphasis on finding and neutralizing the shooter’s vehicle. Once mobile, the killer is much more difficult to stop, Dispatchers should be trained to ask 911 callers specifically about the shooter’s vehicle description. As soon as it is known, incident commanders should assign specific responding units to look for the vehicle rather than driving straight into the scene.

Enough officers will arrive on scene very quickly. If the shooter is gone before they get there, having all the officers in the world won’t help. Officers must be deployed intelligently to get ahead of the killer.

2) It had an explosive component.  Most modern active killers are adding bombs to their arsenal to increase body counts.  If you don’t know anything about explosives, check out Armed Citizen Response to the Terrorist Bomber.  In this event, the shooter used portable tanks of propane in an attempt to blow up the Mexican consulate building.  His makeshift bombs was ineffective, only creating a fire that was easily extinguished.

3) The shooter used two long guns and had hundreds of rounds of extra ammunition.  He did his shooting with both a .22 rifle and an AK-style weapon.  he was wearing a “tactical” vest with a Camelback hydration bladder so he wouldn’t get thirsty during his killing.  Are you prepared to deal with this kind of attacker?

4) The shooter planned to die.  Like many active killers, this guy didn’t plan on surviving.  He wrote notes explaining how he was going to be killed in the attack.  It’s important to recognize that when someone is so set on dying, there isn’t much you can do to convince them to change their plans.  that’s why the tactic of “talking them down” doesn’t work.  They don’t want to be talked down.  They want to die and take as many people with them as they can.

5) Sometimes gunfights aren’t “typical”.  When is the last time you’ve practiced your hundred yard, single hand, low light pistol shooting?  You can say “I’d never have to do that,” but in this case the officer did.  He had to make a very difficult shot with his pistol.  Could you do the same?  The bad guy gets to choose the conditions of our fight.  We have very little say in the matter.  We must play the hand we are dealt no matter how crappy the consequences.  It’s important that we are prepared to deal with the bad cards as well as the good ones.

6) Another example of “off peak” timing- This attack happened at 2:30 am.  Why shoot up the place when no one is there?  As I predicted in my recent article on the FSU shooting, I think that shooters will continue to initiate their attacks at times when we least suspect it.  Fewer cops around to stop the chaos and people less prepared to act prolongs the killers’ abilities to find and shoot victims.

Sometimes I think these types of shootings are even better to study than the shootings with a large body count.  The facts don’t get spun around quite so much.  It makes it easier to separate the wheat from the chaff.