On Tuesday, a man shot up a restaurant in San Diego.  He fired through the windows from outside the restaurant.  Although he fired approximately 20 rounds out of an AR-15 rifle,  miraculously none of the nine restaurant patrons were hit.

The gun was recovered and the suspect was arrested a few blocks away.  Read the link below for more details.

In the last few years we’ve seen several attacks initiated outside.  The best known is likely the Sandy Hook school shooting.  Beyond that, we saw a school attack in northern California where the killer began firing from outside.  The Texas Church attack is a third example.  Finally, there was also an attack  on a Pennsylvania Township office.  There have been a couple more, but mostly people have forgotten them.

Have you ever considered what you might do if you were trapped in a building that was being fired upon from an outside attacker?

First, lock the doors.  This is what saved many lives in the California school shooting mentioned above.  When school staff heard reports of shooting nearby, they immediately went into lockdown and secured all exterior doors.  The shooter arrived at the school, walked around while firing rounds and trying to find an open door, and then eventually left when he couldn’t get in.

Stay away from windows and any glass in the room.  Several patrons in Tuesday’s restaurant shooting were cut by flying broken glass as the attacker shot through the windows.

Stay away from the windows and any large mirrors or glass display cases that might be broken by gunfire.  Make it a practice to sit at least one table away from any large plate glass windows in any public location.  I never sit right next to any large restaurant windows. 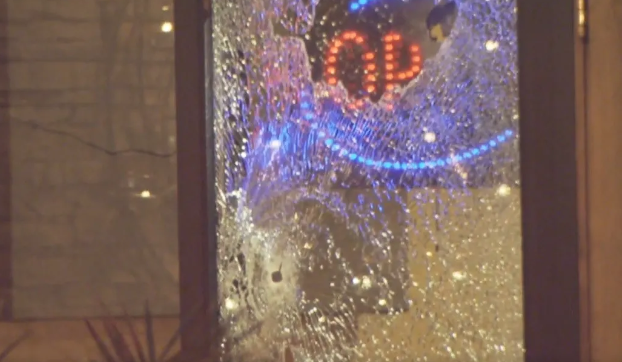 Turn out lights and close window blinds.  Don’t provide the shooter with any visible targets.  If you have access to the lights, kill them.

Consider moving furniture in front of the windows.  After closing blinds, as long as you aren’t taking direct fire, it might make sense to barricade the window area with pieces of furniture as additional cover.  Most exterior walls on school or public buildings are fairly resistant to gunfire.  Windows are not.  It makes sense to put as many layers of cover material over the window opening as possible during any prolonged attack.

Counterattack.  If you are armed, consider  a counterattack.  The most effective methods of doing so involve roof access.  If you can get up to the roof, you could fire down on the shooter without being seen.  Have you ever evaluated the public buildings your frequent with regards to roof access?  Maybe you should.

Absent an having an elevated sniper position, the next best tactic has the defender exiting the building opposite the side of the gunfire and quickly working to flank (get behind) the shooter before engaging.  You don’t want to be trading bullets with a dude who is better armed than you.  Don’t just run outside and confront him.  Set up an ambush or flanking position and shoot him by surprise.  Do you have pre-established external ambush positions identified in the event you encounter a situation like these?  Maybe you should.

The prudent CCW carrier should consider the risks of outside gunfire in any public location he frequents and adopt a few of these suggestions to reduce casualties in the event of an externally initiated attack.