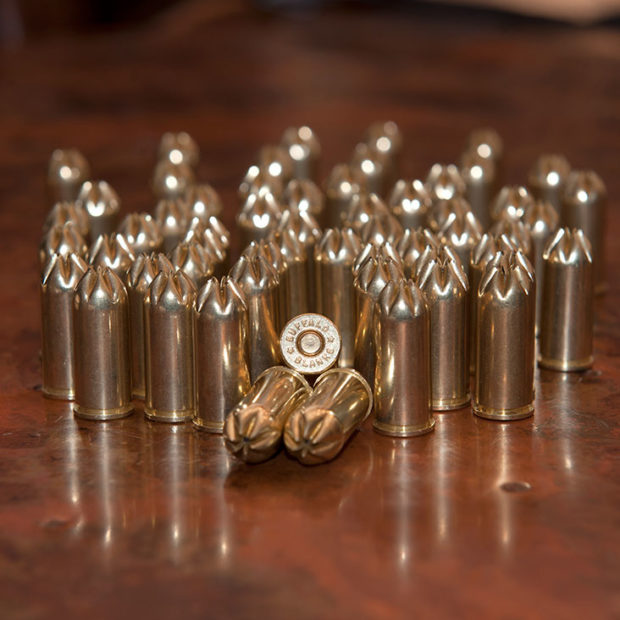 Most of you have likely heard about actor Alec Baldwin’s negligent discharge of a “prop” pistol on a movies set last week.  Someone’s failure to distinguish between blanks and live ammunition led to the tragedy of two people being shot, one of whom died. 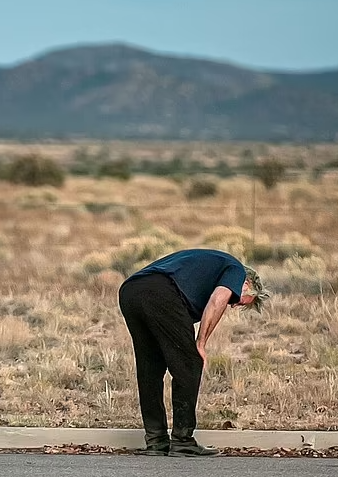 The incident has resulted in many people calling for a ban on the use of blanks on movie sets because they are so dangerous.  Lots of experts think that airsoft guns combined with digital effects enhancement would be just as realistic without the dangers of blank firing weapons on the set.

If blanks aren’t safe for movie sets, why are we using them in our training classes?

This isn’t the first time a “blank gun” has killed someone.  Lots of folks have been killed or injured by blanks fired in training.

Take a look at the incident below…

While conducting training, a role player fired a blank round at contact distance into another officer’s back.  The officer shot with the blank had to be hospitalized.  Read about the details of the incident in the link :

Most of you will likely also remember the police training fatality  when an officer killed a member of the citizens police academy class he was teaching when he mistook a wadcutter .38 round for a blank. 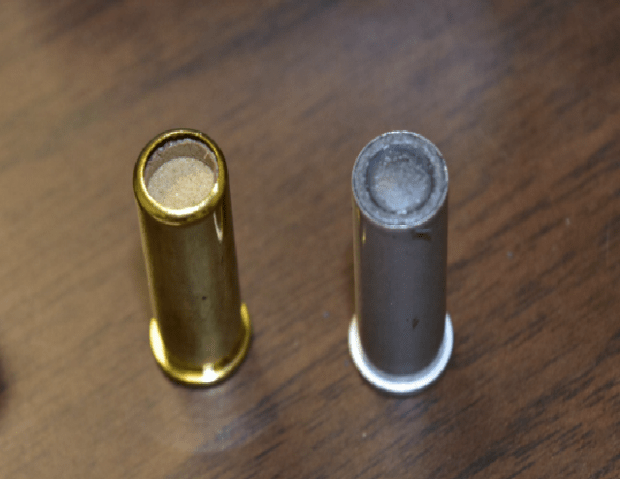 Blank round on left. Wadcutter round on right.

In case you’ve never heard of a blank round, it is a cartridge loaded with gun powder but no projectile.  It is designed to create noise and mimic the sound of a firing gun without actually shooting any projectile.

There are two primary reasons blank rounds are dangerous for training.  The first is that at extremely close range, the muzzle blast and burning gun powder can cause burns and injuries if the blank round is detonated close enough to another person.  Several people have died after being shot in the head by blank cartridges.  Brandon Lee (Bruce Lee’s son) was killed on a movie set when a blank round pushed a bullet from a squib load down the barrel and into the actor’s abdomen.

The second danger is that blank rounds are fired out of REAL firearms.  Whenever functional firearms are used in training, there is a small chance that someone will forget to unload the live ammunition and replace it with blanks.   People die when the live ammo is fired in a training scenario.

My best advice to all of you is to AVOID USING BLANK ROUNDS IN YOUR TRAINING SCENARIOS!

The risk simply isn’t worth the gain.  There are far safer ways to simulate gunfire than by using blank rounds.

In my private training classes, I do not use blank rounds at all.  There may be a very small role for blanks in a tightly scripted and controlled active killer scenario where officers or citizens have to locate the killer in a building via the sound of his firearm, but I can’t think of any other situation where blank rounds should be used.

Have I used blank rounds in training?  Absolutely.  When I was too young and stupid to realize how dangerous they were.

More than 20 years ago I used blanks in a large scale training scenario I put on for the police department where I worked.  The scenario involved a murder that had taken place in an abandoned house that had been donated to the city.  Officers responded to a “report of gun shots” call from a neighbor and then took fire from the murderer as they approached the house.  The purpose of the session was to teach perimeter containment, incident command, and when to call out the SWAT team.  I never intended any officers to make an apprehension of the “murderer” inside the house.

I had given the role playing “murderer” very strict instructions not to aim his blank firing pistol directly at any officer and not to fire it if he was within 10 feet of another participant.  I ran the scenario several times and the the officers did everything I expected they would do.  No one was injured.

On the last training evolution, I had two responding officers act rather unconventionally.  They kicked down the locked door of the house and took the “murderer” at gunpoint.  My role player knew the rules.  When the cops kicked in the door, he stopped firing and stuck his .45 pistol loaded with blanks in his waistband behind his back.

When the cops moved in to cuff the bad guy, they found the loaded and cocked pistol in his waistband.  During the course of removing it, one of the officers pulled the trigger accidentally.  No one was meant to be shot, it was a true negligent discharge.  Three of my officers had minor injuries (one taking quite a bit of burning powder to her face) after the blank gun fired.

I stopped using blanks in my training after that incident.  I would suggest that you all avoid using blanks as well.  It’s simply too easy to screw up and get someone hurt or killed.

Some of you will ignore my advice and will continue to use blanks.  If you do, there are a few harm reductions strategies you can employ:

2.  Consider using a blank-firing adapter (BFA).  These are devices that screw on to the end of the barrel to provide a little bit of “back pressure” to allow blanks to more reliably cycle semi automatic firearms.  BFAs are commonly used on the M-16 rifle family for military training.  They are a good option because they physically block hot gasses (or an actual live round) from exiting the barrel. 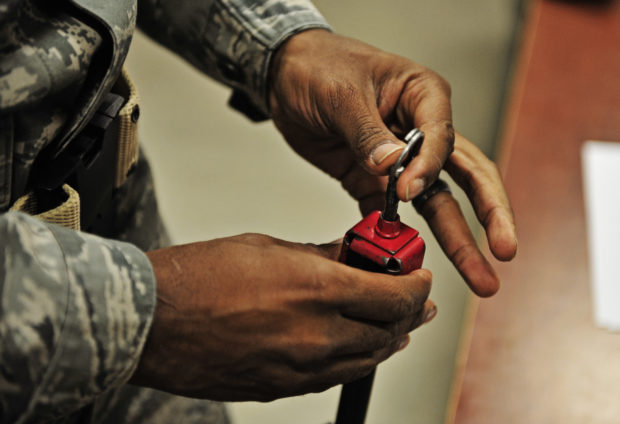 3. Consider Simunitions “Securiblank” training rounds.  These rounds are fired out of a Simunition gun that cannot chamber live ammunition.  They have a reduced report and minimal blast.  While expensive, these are significantly safer than firing traditional blanks. 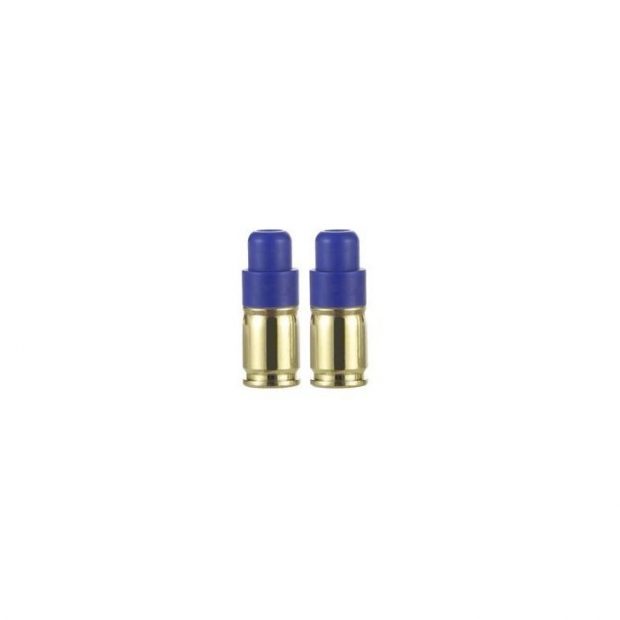 Role players very commonly encounter unexpected situations and act “instinctively.”  It’s hard for a “bad guy” armed with a blank pistol to avoid firing at officers when they engage him at close range with airsoft, Simunitions, or UTM projectiles.  Shooting back is almost a reflexive act in that situation.  You must provide strict rules and adequate training to prohibit your role players from using blanks in a dangerous manner.

Most police agencies don’t have enough time to conduct quality firearms training, let alone time to train role players how to act in a particular scenario.  Poor role player training or scripting combined with the presence of a real weapon firing blank rounds is a scenario training disaster.

There are too many safer substitutes to consider using blanks in a modern training scenario.  Recorded gunfire, starter’s pistols, CO2 powered airsoft guns (without BBs) or even fire crackers would be a safer alternative if you need the sound of gunfire for your training scenario.