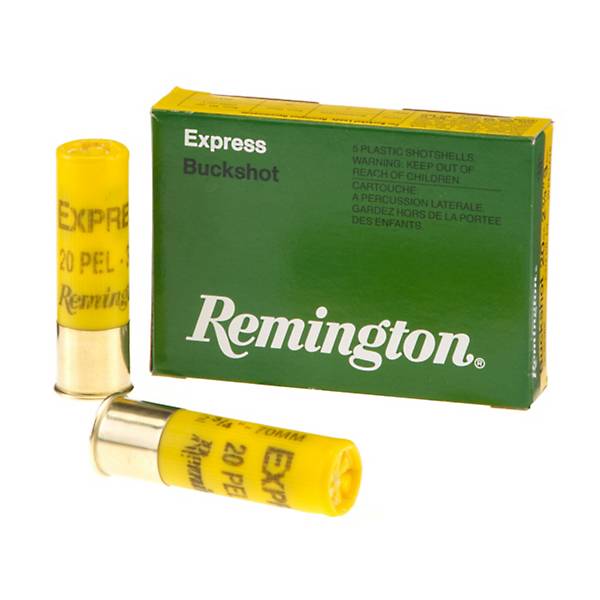 After seeing a  guest post about the need to have a self defense shotgun, several readers asked me questions about the 20 gauge.  Here is one:

“Nice article on the shotgun for defensive use. Good to see the old stand by’s discussed from time to time.

The boys and my wife like the 20 gauge better, for many of the reasons you suspect. I’m becoming a fan as I get older just because the lighter frame is easier to carry afield.

We’ve been using #2 and #4 buckshot for the 20 gauge, but Flite Control wads aren’t offered by Federal in the 20.

Looking for some expert opinion or a lead in the right direction. We would use this round for small deer or the occasional bump in the night (which is usually a raccoon or feral dog trying to get into the poultry barn).”

The 20 gauge can be an excellent home defense weapon.  The problem, as my reader noted, is the availability of really high quality defensive ammunition.  Double aught buckshot doesn’t pack neatly into a 20 gauge shell.  Most companies load their 20 gauge offerings with numbers two, three, or four buckshot instead.  As far as I know, no company is currently using an improved wad like the Federal Flight Control or Hornady Tap.  That means if you choose the 20 gauge, you will be limited to what is essentially 19th century ammunition technology.

For pests like raccoons, coyotes, and feral dogs raiding the hen house, my reader won’t be hampered by the ballistic disadvantages of the available 20 gauge loads.  For self defense against humans, the 20 gauge may or may not be a good choice depending on the circumstances.

As for terminal effects, at close range the 12 gauge and 20 gauge will both perform well. The payload for a 12 gauge is generally one ounce of lead per shell. The 20 gauge throws 7/8 of an ounce of lead at similar velocities. You aren’t losing significant “stopping power” by going to a 20 gauge instead of a 12 gauge, instead, you are losing range.   With a 20 gauge, the defensive loads don’t pattern as tightly as the 12 gauge. 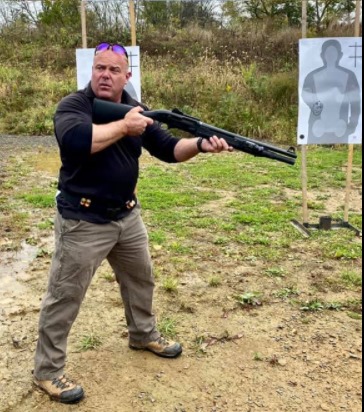 In a recent shotgun class, we did some load patterning and a comparison between 12 and 20 gauge buckshot.

– Federal Flight Control 12 gauge 00 Buck consistently made fist-sized groups at 50 feet with all the guns. Hornady Critical Defense 12 gauge 00 patterned just slightly larger than the FFC. No other buckshot load patterned even close to as tightly as these two rounds.

– Wolf 00 Buck had the biggest pattern of any of the 12 gauge loads we tested, with several pellets being out of the area the size of an adult male’s chest at 50 feet.

-The pattern size of the 20 gauge #3 buck was the largest of all. Its group at 10 feet was larger than the FFC at 50 feet. Beyond 30 feet pellets were landing outside of the chest-sized area of the target.

The poorest patterning 12 gauge had an “all chest hit” pattern size at 50 feet. The 20 gauge buckshot started dropping pellets into the arm areas of the targets at 30 feet. For indoor home defense scenarios, the 20 gauge will probably be fine. If your defensive encounter might occur at a longer distance, choose the 12 gauge.

The longest shot I can get in my new apartment is 19 yards.  That particular shot has a concrete wall as a backstop.  I’m not too worried about a couple pellets spreading wider than a human silhouette in that particular scenario.  Inside a normal sized home, the bad guy isn’t going to know the difference between 12 and 20 gauges.  But if you have to take a longer shot, you will be hampered by the larger pattern size of the 20 gauge buck shot.

For another example, take a look at this patterning test out of a short barreled 20 gauge Mossberg Shockwave.  At 50 feet, the pattern was already at 15.5″ and had one pellet off of the silhouette.  A good Federal or Hornady 12 gauge round would have all of the pellets in a group approximately 1/3 of this size. 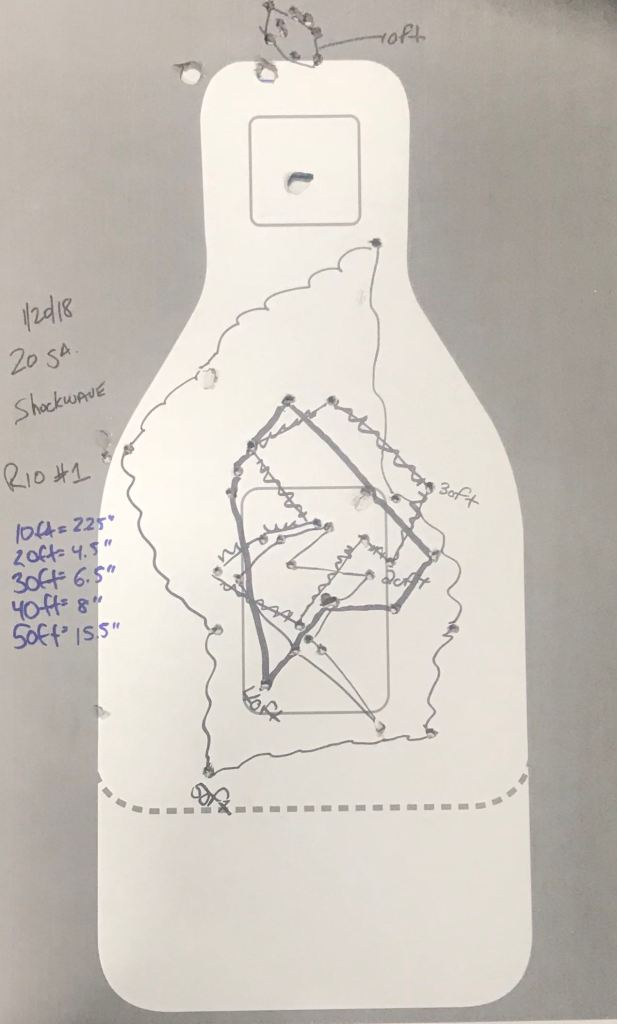 One of the other issues with 20 gauge shotguns is that with heavy loads, they have about 90% the recoil impulse of a 12 gauge shotgun.  But the 20 gauge guns are often lighter.  The perceived difference in felt recoil often isn’t as great as many folks expect.  Sometimes a heavier 12 gauge gun shooting reduced recoil shells actually recoils less than a 20 gauge in a light gun.

I have two 20 gauge defensive shotguns.  One is a double barrel Savage/Stevens coach gun.  The other is a short- barreled Remington 1100.  Both are loaded with Remington #3 Buck cartridges.  At any distance closer than 15 yards, I have confidence that the round will stop a bad guy just fine.