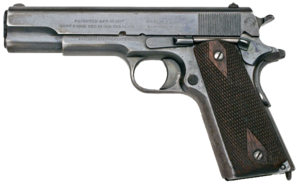 Col. Jeff Cooper was a huge fan of the .45 handgun.  He once made the statement that the .45 ACP will instantly stop 19 out of 20 attackers.  While I greatly respect Col. Cooper’s contributions to the shooting world, on this topic he was flat wrong. 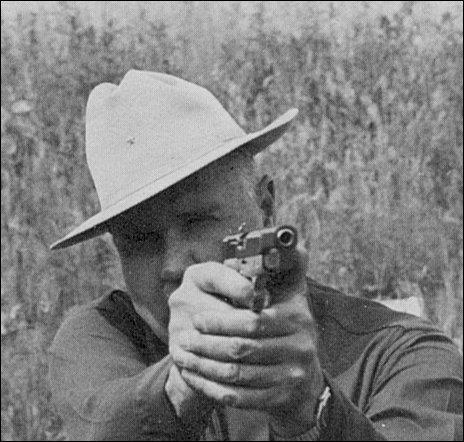 The late Col. Cooper. May he rest in peace.

The .45 ACP is a fine cartridge.  I carried one every day on my police duty belt for nearly 20 years.  It just isn’t quite the man stopper that Col. Cooper suggests.  I submit the following news article to highlight my position:

The short article describes an incredibly violent home invasion attack against a 64-year old man and his wife.  It was 4:30 am and the man awoke to the sound of breaking glass.  Before he could realize what was happening, both he and his wife were under attack by two intruders.  One of the men grabbed him.  The other put his wife in a headlock and began punching her in the face.  Fortunately, the homeowner was able to grab his .45 pistol just before the attack.

“I raised my .45 and squeezed off three rounds in his face,” he said of the intruder closest to him. “He was still coming. I emptied the magazine and he fell on top of me.”

Three .45 rounds to the face and the attacker is still in the fight?  How could that be?  The .45 is supposed to drop 19 men out of 20!  If you have researched shootings as long as I have,  failures like this wouldn’t surprise you.  No handgun works that well.  The .45 is as good as any other round and better than most, but sometimes things just don’t work out the way you plan.  I’ve seen stories of people who have been hit by WAY more than 3 rounds from a .45 and still kept fighting.

To make matters worse, one of the homeowner’s rounds missed and hit his elderly wife in the arm.  She survived.  The bad guy didn’t.

I commend the man in this case for his ability to stay in the fight despite a lot of factors going against him.  But that doesn’t mean he did everything right.  He made some mistakes.  He’s actually quite lucky he prevailed.   We can learn some lessons from this case…

1) NO HANDGUN WILL RELIABLY STOP A CRIMINAL WITH ONE SHOT

Most gun owners like guns and shooting.  They like to talk about “what’s best”.  That’s cool.  Just don’t make the mistake of putting a piece of gear at the top of your priority list.  No pistol works that well, and there is very little difference in real world “stopping power” between any of the calibers.  Check out my study HERE.   Most handguns stop fewer than 50% of attackers with one shot.  It will generally take 2-3 shots to bring an attacker down.  Expect that.

Instead of endlessly obsessing over the best firearm and ammunition combination for self defense, spend your time training with the gun you have.  I promise your training will lead to better long term results than simply finding the “perfect”  carry pistol.

2) MANY DEFENSIVE FIREARMS USES OCCUR AT NIGHT.  YOU NEED A FLASHLIGHT!

“It was pitch-black. I shook myself awake and saw legs coming through the bedroom window”

Imagine what would have happened if the homeowner shined a bright flashlight on the intruder climbing through the window and ordered him to get out or be shot?  Maybe the criminal would still press the attack, but there’s a good chance he would move on to find an easier victim.

Even if the attacker didn’t flee, the light would provide the homeowner with a better visual reference, a more certain threat assessment, and likely more accurate shots.  I can’t help but wonder if the missed round that hit his wife was the proverbial “shot in the dark”.

Buy a couple good flashlights.  My bedside lights are made by SureFire and Fenix, but there are lots of other great ones available.  Just don’t use the $2 piece of junk you picked up at the grocery store as your defensive light.

And I shouldn’t have to say it, but you should also practice shooting your gun while holding your flashlight as well.

3) HAVE GOOD LOCKS AND AN EARLY WARNING SYSTEM

It sounds like the homeowner here was a deep sleeper.  I am too.  That’s why my bedroom door is solid wood and has a deadbolt.  My windows can’t be reached from the outside without a ladder.  I have audible alarms in my house.  No one is going to break in while I sleep without at least waking me up!

In these crisis situations, time provides you with options.  Anything that you can do to delay the criminal’s access or alert yourself to the attack as quickly as possible will work to your advantage.

Take a few minutes and think about your house as a criminal would.  How would you get inside?  Fix that.

4) HAVE A PLAN AND TALK ABOUT IT WITH YOUR SPOUSE

If your spouse is not a combatant, he or she should still know what you are planning to do in an attack.  Enlist your spouse’s help, even if it is only for calling 911.  The more people you bring to this fight, the more likely you are to survive.  Panicking spouses or family members are dead weight!

Brainstorm some scenarios and pre-plan each of your responses.  Ideally, teach your spouse and family members how to defend themselves as well.  There’s no doubt that this homeowner’s adult son drove off the second attacker by responding with a gun of his own.  This kind of response doesn’t happen by accident.  Train and Brainstorm!

For an article that is supposed to be focused on mindset, training, and planning, I know I’m harping a lot on equipment selection.  But it needs to be mentioned.  Many gun owners I work with carry low capacity pistols for concealment and even rely on the same guns for home protection.  I think it’s a bad idea.  Your probably won’t have time to reload in your gunfight.  If you are limited to the rounds in the gun, you might as well have a lot of them.  Don’t rely on that Micro 1911 with the 6 round capacity.  Don’t trust that 5-shot .38 snub.  If your gun holds fewer than 10 rounds, you might want to reconsider your choice of equipment.

The article doesn’t mention what kind of .45 the homeowner had here.  It does say he emptied the magazine.  If we assume the .45 was a 1911-style pistol, he likely had 7-8 rounds in the gun.  That was barely enough.  The bad guy collapsed ON TOP OF THE HOMEOWNER!  And the homeowner had an empty gun!  That’s cutting it too close in my opinion.

I’m well aware of the statistics.  Most of the time when a homeowner pulls a gun on a criminal, the situation is resolved without a shot being fired.  When armed citizens shoot criminals, the average number of rounds fired in the encounter is around three.  Don’t be lulled into a false sense of security by those stats.

What happens when your gunfight isn’t “average”?  If you just look at statistics, you don’t need a gun at all!  Very few people are criminally victimized in a given year.  If you play the odds, you won’t ever need a  firearm.  But you still have one, don’t you?  You have one because you are preparing for the exception, not the norm.

Use the same logic when you are choosing your defensive sidearm.  Don’t prepare for the “average” gunfight.  If you prepare for the worst, the statistical norm will be much easier to handle.

I believe in having a lot of bullets.  My bedside pistol is a Glock 19 in 9mm.  It is loaded with a Glock 17 magazine with an extended base plate.  That gun holds 22 rounds of ammunition.  I’m not running out of bullets if I’m forced to deal with a “long tail” event.

This may be the most important point of all.  Gunfights happen at close range.  A lot are within arms’ reach.  Your traditional target shooting grip and stance doesn’t hold up so well at this range.  Learn how to shoot from retention positions.  Learn how to defend your firearm.  Get some quality training.  You’ll be amazed by what you DON’T know! 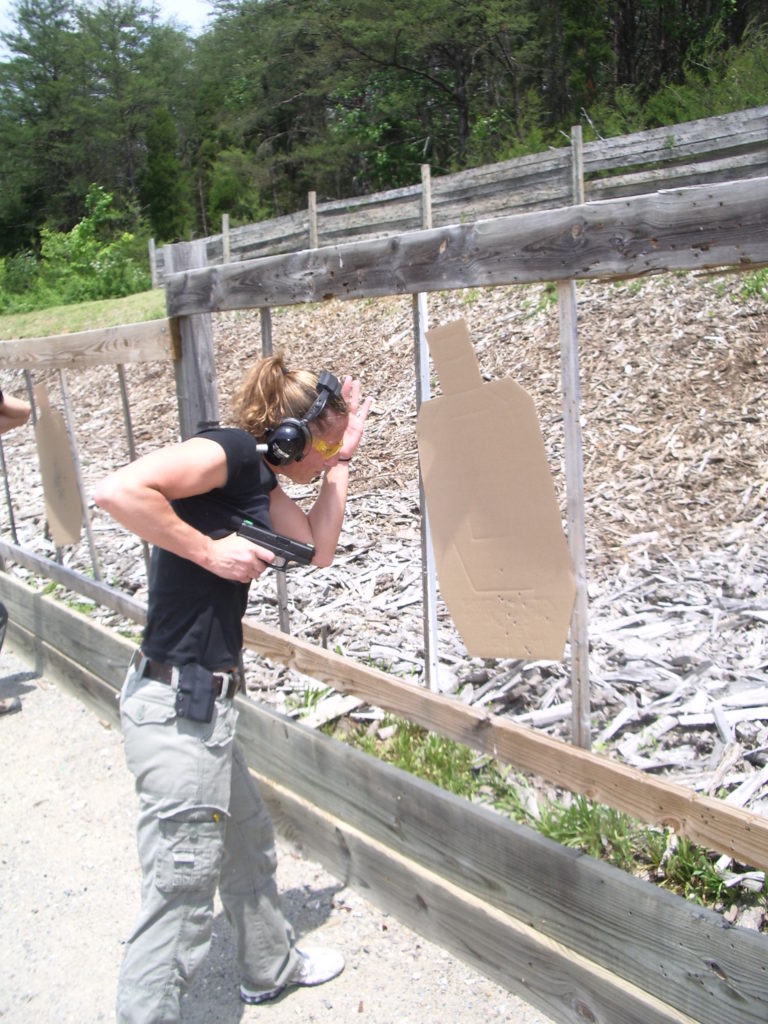 Have you ever fired your pistol from this position?

It is said that “good luck reinforces bad tactics”.  Although distasteful to second guess the responses of the victims in scenarios like the one described above, it is vitally important.  Don’t assume that you did everything right just because you survived.  You can always improve.  Study the mistakes of others so that you are less likely to make the same mistakes yourself!