Have you ever thought about how you might defeat restraints if you are even tied up by criminals?

Imagine the scenario where two armed home invaders break into your house around 10 pm.  They catch you by surprise.  One of the criminals points a pistol at your face while the other orders you to remove you shoes.  The second home invader then binds your hands behind your back with your own shoelaces and the two criminals ransack your house.  Just such a scenario happened  in Los Angeles.

Doing a quick Google search I found the following news articles describing similar home invasions in the past six months.

Women tied up in home invasion in Lantana, man charged

5 residents, including child, are zip-tied during home invasion in Whittier

Four YouTube stars tied up by suspects dressed as cops

Family Held at Gunpoint, Tied up During Home-Invasion Robbery

Concord Resident Reports Being Tied Up In Home Invasion Robbery

Gaston County man says he was tied up during home invasion

Would you know how to escape any type of restraints that a criminal might use against you?

Although this homeowner was not harmed after he was tied up, many other victims have been.  Being restrained limits all future options.  You should absolutely fight as hard as possible to avoid being bound.  Nothing good can happen once your hands are tied behind your back.  Being tied up is one of those “automatic fight triggers,” an event that you should violently resist as soon as you are aware it might happen.  Your chances of emerging unharmed after you are bound are very small.  The easiest restraints to escape are those that never get applied.

With that said, sometimes you might be overwhelmed and thrown into a position where resistance will only get you killed.  Once you realize an initial escape isn’t likely, stop fighting. Don’t anger, challenge, or insult your captors. Direct eye contact may be viewed as a challenge as well. Don’t stare at your captors or look them in the eye. Keep eyes averted or downcast. Go along with the program until you have a better opportunity to escape.  You aren’t complying, you are just buying time to wait for a better opportunity to make your move.

Constantly be alert for escape opportunities. Captors usually become more and more complacent the longer you have been held. That has allowed numerous hostages worldwide to exploit their captors’ inattention and successfully escape. Take any opportunity that affords itself.

You’ll generally need some type of tool to facilitate your escape.  My primary escape tool is  Ka-Bar LDK knife.   I designed this blade expressly as a tool that can be easily hidden on the body and would likely be missed on a cursory pat-down search by your captors.   While it works as a last ditch weapon, I primarily carry it as an escape tool. I carry it in the small of my back below the belt line so that I can access it and cut myself free if my hands are tied or taped behind my back. It can be safety pinned directly to your pants or hung from a belt loop on your pants using a key chain or a small loop of paracord.  A knife hidden in such a fashion would make short work of the shoelaces that bound the home invasion victim discussed above. 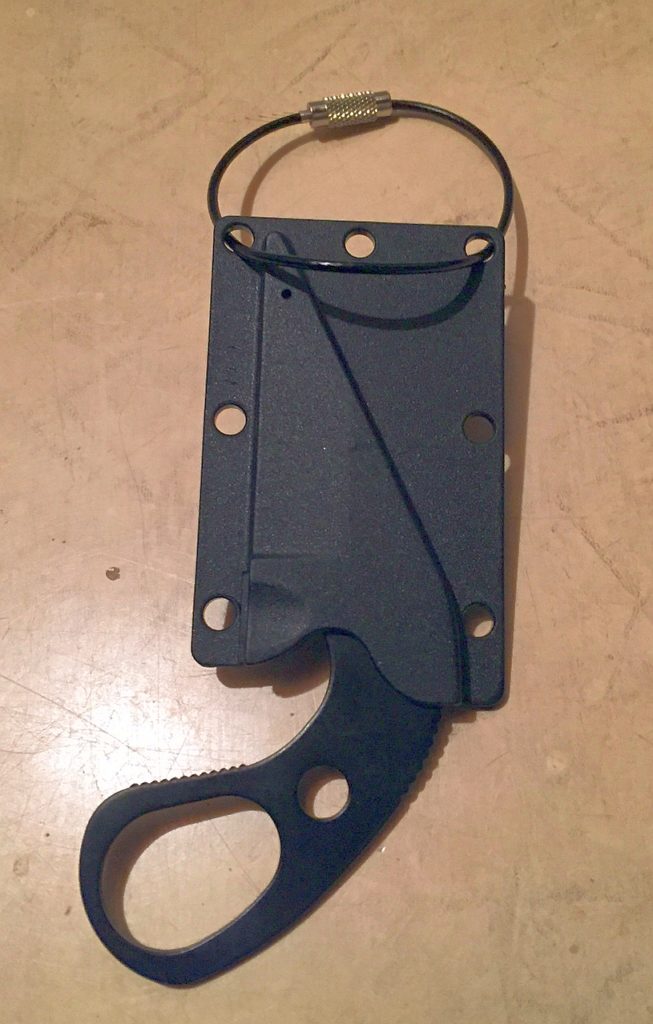 Ka-Bar LDK knife on flexible keychain. I attach the key chain around a belt loop in the small of my back and tuck the blade down into my pants.

While rope and tape are the most common ways that crime victims are bound, you should also be prepared to escape other restraints as well. If your captors use high strength zip ties or police flex cuffs to restrain you, you will be unlikely to break or cut them without seriously hurting yourself. The best option for getting yourself free from restraints like this is to use a friction cutting method.

I replace my shoe laces with stronger paracord when I travel. I can unlace a shoe, tie a loop on either end of the lace and thread the paracord lace through the flexcuffs. After doing that, I can loop an end of the lace over each of my feet. By “pedaling” my legs as if I am riding a bike, the paracord will quickly saw right through the flex cuffs or zip ties. There are several videos on the internet that show this technique. Check out this one from ITS Tactical for the basics.

Handcuffs, although relatively rarely used by criminals, are another method of restraint that you will need to prepare for. While it is fairly easy to pick handcuffs with a paper clip or bobby pin, it requires some practice and is very difficult to do when your hands are cuffed behind your back. It’s much better to have a hidden key or keys on your person.

Handcuff keys are universal no matter what country the handcuffs come from. A small handcuff key taped to the inside of your belt (best to have one both in front and behind the back) is an easy solution. Keys can also be taped under watch bands or hidden inside the waistband of the pants (after cutting a small slit in the lining). I carry a cuff key under my watch band and another one strung onto the key ring I use to hide my LDK knife in the small of my back. Smaller keys are obviously easier to hide. I prefer the plastic keys from SerePick or from TIHK.

Gearward also sells what they call the “A-K Band.”  It is a rubber sleeve that slides over your watch band.  Hidden inside the sleeve is a plastic handcuff key, a ceramic razor blade to cut restraints, and a small section of ultra thin Kevlar cord that can be used as a friction saw in the same manner that I described above with paracord. 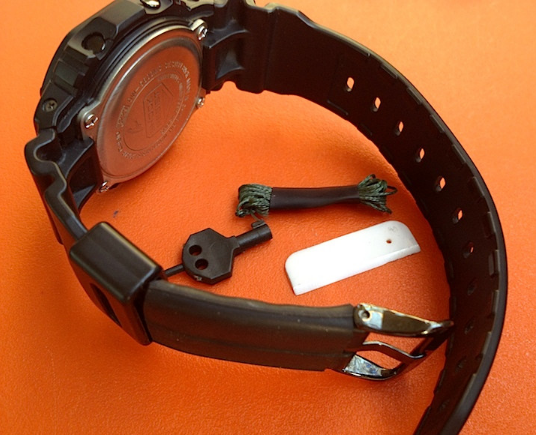 Handcuffs can be shimmed as well. This video provides a good introduction to the concept.

I carry a couple of shims from Serepick on my person when traveling in dangerous areas. The UberShim from UK company OscarDelta is a great low profile option as well. If you don’t have any commercially manufactured shims, you can make them yourself from any thin pieces of metal. Disposable safety razor blades and the metal stiffener in a windshield wiper work best.

One last escape tool that I have found exceptionally useful is the Advanced Personal Escape Kit from OscarDelta. This piece of gear masquerades as a necklace that you can wear under your shirt. It’s barely noticeable when worn. The “necklace” is really an exceptionally tough cord that can be used as a garrote or as a friction saw for cutting through flex cuffs. Attached to the cord is a handcuff key, a handcuff shim, a mini glowing light stick, and an exceptionally hard striking disc that will break window and automotive glass. Having all these items on a cord around your neck in one place is handy, but I would still suggest having a few smaller keys or shims stashed in other locations as well.

You don’t know how thoroughly you will be searched after you are kidnapped. Losing all of your tools at the same time when your captors find your necklace won’t help your long term survival. The more items you have, the more likely one or more will be missed on a hurried search of your clothes and body. That makes your escape chances significantly greater. 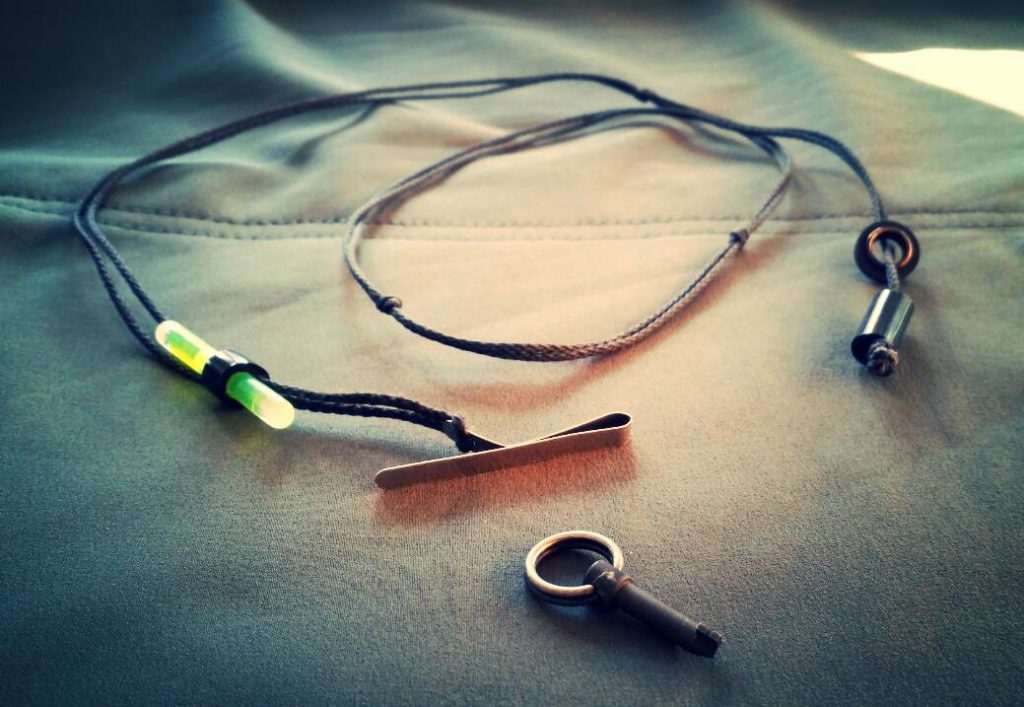 Tools are important, but skills and mindset are even more valuable.  Consider purchasing some of these escape tools and carrying them with you.  But like most defensive tools, they require practice to master.  Merely having the tool isn’t enough.  Practice until you can use the tool to quickly escape restraints under any and all possible conditions.  Only then will you truly have options.