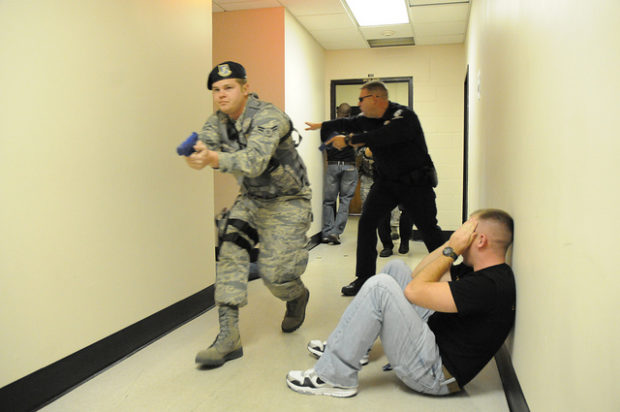 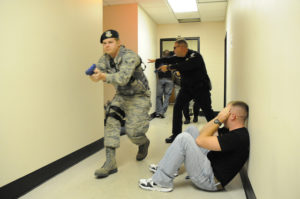 My friend Ron Borsch recently updated his statistics looking at the last five years’ crime stats with regards to what he calls “Rapid Mass Murders.”  Ron has consistently provided some of the highest quality research in the world with regard to active killers.  Ron agreed to share his latest research summary with my readers.  Everything below this paragraph is Ron’s work and analysis.  I thank him for all of his rigorous research and for sharing his analysis with my readers.- Greg

A GLIMPSE OF MOST CURRENT RAPID MASS MURDER©

Years 2010 through 2014 revealed our most recent data. In the past, we used data back to 1975. Since awareness of the active killer and Rapid Mass Murder©, (RMM), eventually resulted in early and more effective countermeasures by citizens and law enforcement responses, we began to use 1999 post–‐Columbine High School, (Littleton CO), data to represent a better picture. Here we are taking an even more recent five–‐year slice of important data that meets our protocol for RMM.  In summary, RMM is defined as “Within 20 minutes, four or more murdered or attempted at the same time and public place”. We are targeting the crimes of random actors and do not count criminal action by military, police, and organized gangs or terrorists.

The term Active Killer, (“One who commits or attempts Rapid Mass Murder”©), includes murder by any means whereas active shooter does not. The two terms are also NOT interchangeable as there are different definitions for each. “Aborted” typically means either no further harm to innocents by a lifesaving stoppage. Previous overall data indicated that only about half of RMM was stopped by anyone. When murder/attempts were aborted, typically it was about two–‐thirds by citizens, (mostly unarmed and mostly initiated by a single actor), and one–‐third by law enforcement.

GOOD NEWS: our most recent slice of the last five years indicates a significant increase to 65% of aborting RMM. Still, the bad news is that in 35% of the incidents of RMM, the killing stop only when the murderer says it stops. Law enforcement intelligence and training have improved after the realization that preciously, if initiation by SINGLE citizens resulted in a majority of successful citizen RMM stoppages, (about 80%), and that initiation by “Single Officer’s Lifesaving Others”© was the majority law enforcement success, (about 70%), enlightened agencies and officers strategies and response tactics began to naturally gravitate toward these more successful methods. In this five–‐year measurement of RMM that fit our protocol, 100% of the murderers were males acting alone. Amazingly, as RMM incidents were typically on the increase and after a record high of 17 RMM incidents in 2012 with less than half aborted, 2013 gave us a breath taking turn–‐around.

There were only ten RMM incidents, but even better, ALL OF THEM WERE ABORTED, and The majority was by law enforcement! RMM Percentages are rounded:

In this most recent 5 year view, there were at least six incidents of murder/attempts by active killers with edged weapons, two incidents of intentional motor vehicle mow–‐downs, one incident involving arson and one involving explosives.

All four non–‐gun–‐shooting methods for RMM & attempts appear to be on the increase, especially considering the 2015 Louis Armstrong New Orleans LA airport incident. On Friday night 032015, a 63 year old former taxi driver, when confronted by a TSA agent, dropped the bag he was carrying, initiated his attack with wasp spray, drew a machete, attacked TSA agents and other innocents during a 40-second event until shot three times (fatally) by a female TSA Lieutenant.

Casualty counts of innocents: Zero murdered, one wounded. The bag he brought had six Molotov cocktails, a grill lighter and plastic letter opener. Next to his body investigators found powdery material and wicks, which they determined were from crushed smoke bombs. The bomb squad found more smoke bombs in his car, and in the trunk were three gas tanks, one for Freon, one for oxygen and one for acetylene, a compressed gas used in welding and metal-cutting.

Our readers are reminded again that those with Numerous Unstable or Troubling Symptoms, (NUTS©), often search the Internet for these incidents during their fantasy and planning stages. They typically copycat methods that they find attractive to them.

EXCEPT FOR ACTIVE KILLERS, NO GUNS ALLOWED

As expected, the locations most noted for forbidding possession of firearms, (by off–‐duty, retired officers, and trained law-abiding citizens with concealed carry permits), were the hardest hit facilities. Cowardly active killers prefer murdering unarmed defenseless innocents since it is naturally safer for them to do so.

Our glimpse at 2010–‐2014 revealed 21 types of attack locations. Predictably, at no surprise to anyone, at 1st place were Educational facilities, both K–‐12 and Colleges/Universities, led with 23 attacks, (37%). City–‐County–‐State–‐Federal Government facilities were 2nd at 7 attacks, (11%), followed by a 3rd place tie between Restaurants and Malls/Stores at 4 attacks, (06% each). While the remaining 17 locations shared 40% numbering only one or two attacks each, still the casualties in them were significant.

In the past, Churches were popular with active killers at 3rd or 4th place. In this 5 year glimpse, there were only two Church RMM tied for 5th place with several other locations.  Astonishingly, in light of schools being a known as a literal magnet for attracting active killers, recently in the news was the Baltimore, Maryland School Police Dept. being turned down again for the authority to be armed inside a school while their schools are in session.  Their alleged gun–‐free zone utopian insanity only empowers those who would murder innocents, especially children. Such locations are merely tragedy time bombs waiting to happen.
While random actor active killers committing Rapid Mass Murder is primarily an American crime, there were ten countries included in these five years. Germany had two attacks, the remainder had one each: Canada, China, Brazil, France, Israel, Netherlands, Norway, and South Korea. In 2011, data was skewed by the high number of casualties from the Norwegian Island and
Liege, Germany Bus Station attacks.
THOSE THAT STEAL OUR RIGHTS

Evil is an ever–‐present given, a constant. Utopian belief that it is the tool not the hand that wields harm is flawed thinking. Because Utopians fail to recognize that evil exists, Utopians versus real evil is a no–‐contest victory decision for evil. Utopian well–‐wishers are often blind–‐sided by evil when they think that rules or laws can eliminate unpleasant violence such as, active killers, rape, robbery, home invasion, terrorism, Etc. When we are legally forbidden to have our otherwise legal right (Off–‐duty or CCW) to be armed in certain locations, makes self–‐defense against an active killer or terrorists an almost insurmountable undertaking. It is the Utopians who have made the rule or law that essentially took away our right of self–‐defense there. That they meant well, but were senselessly unrealistic, is little comfort to actual or potential victims.

In our world’s first known homicide, Cain killing Abel, the cause of death may have been hands–‐fists–‐feet, (personal weapons). It certainly was not anything made of metal, as metal had not been invented yet. As the world becomes a more dangerous place, realists everywhere recognize that under “free will”, there has always been and will always be evil of some sort in our world. From one–‐on–‐one crime to today’s savagery of psychotic terrorists, pure evil continues to rear its ugly head.

In the April 2015 American Rifleman magazine, NRA President James R. Porter II makes some key points in his “Words Matter” article summarized here: “In truth, a law cannot prevent any human behavior…Thousands of times each day in our nation, murderers, rapists, and robbers choose to commit violent criminal acts. None of these acts can be prevented by any law. Yet ‘prevention’ is the soothing mantra of those who would steal our liberty. Violence prevention can’t even be accomplished in prisons where every aspect of living is controlled. With all the 2 hour surveillance, with constant searches, inmates make weapons, they possess weapons, and they do violence with them…all the gun-ban crowd is doing with their ‘universal’ background checks is criminalizing the now-lawful commerce peaceable gun owners engage in every day…Words count. The truth counts. The reason Bloomberg is banking on using ballot initiatives to affect what he can’t get through reasoned debate in the legislative process is that he believes the general public is gullible.”

NO ONE HAS A MONOPOLY ON THE TRUTH

We have specific and exclusive definitions and protocols. Different time periods, definitions and protocols by different researchers result in different outcomes. Sometimes it pays to look at the differences, especially when they generally parallel other research work, or indicate a category not looked at by others. For example, an excellent article, (found in Greg Ellifritz’s free newsletter (activeresponsetraining.net) “Active shooters: Trends in the United States and perpetrators’ characteristics”). Here is a summary of some information highlights: The gun-homicide rate has fallen 49% since the mid-1990s in the United States, yet the frequency of mass shootings has increased sharply. At least 78 events took place between 1983 and 2012, and with some of the deadliest occurring after 2007. Much rests on the definition one uses. The FBI found that during the 2000 to 2013 period studied, 160 active-shooter incidents took place in the United States, resulting in 486 killed and 557 wounded- 1,043 casualties in all.

The report’s findings include: From 2000 to 2013, an average of 11.4 active shooting events occurred annually. The distribution of events is highly concentrated in the last seven years, however, with an average of 16.4 events from 2007 to 2013 (versus an average of 6.4 between 2000 and 2006), an increase of more than 150% . Of the 160 surveyed events, 158 involved a single shooter. Except for six events, men conducted the vast majority of attacks. Most incidents were rapid: 60% ended before the police arrived, 44 of 64 (69%) incidents ended in five minutes or less, with 23 ending in two minutes or less. In 21 of 160 (13.1%) incidents, unarmed individuals attempted to neutralize active shooters. In 11 of those, unarmed principals, teachers, other school staff, and students confronted the shooters to end the threat.

In almost 30% of the cases, law enforcement agents and the shooter exchanged fire. In 45 of the 160 incidents where agents engaged a shooter, they suffered casualties in 21 (46.7%) of the incidents, resulting in nine officers killed and 28 wounded. In line with previous finding,s the report found that the attacks were generally perpetrated in commercial areas (73 out of 160 or 45.6%). In 24 of the 160 shooting incidents (15%), more than one location was involved. Schools were the second-largest grouping (39 out of 160, or 24.4%), and 10% took place in government properties. The majority of the incidents (90/160 or 56.3%) ended when the shooter committed suicide, surrendered or fled the scene. Of these, the shooter committed suicide at the scene after law enforcement arrived but before officers could act.

The outcome and resolution of active shooting events was also addressed in a 2013 study in Justice Quarterly, “Mass Shooters in the USA, 1966-2010: Differences Between Attackers Who Live and Die” by Adam Lankford of the University of Alabama. The author examines whether the offender’s living of dying during the incident is strongly correlated with his/her age, gender, number of weapons, attack location type, the number of victims killed or the number of victims wounded. The study is notable for its empirically rigorous, extensive data set and exploration of the difference between those who commit murders and murder-suicides.