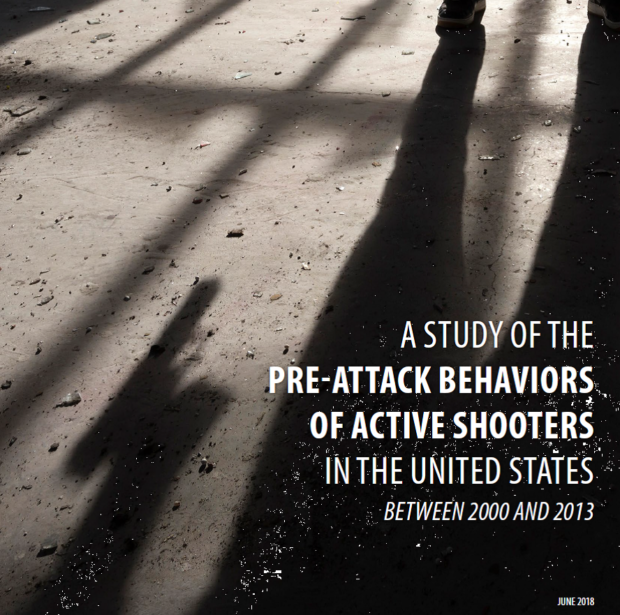 Last week, the FBI posted their study of the Pre-Attack Behaviors of Active Shooters in the United States from 2000-2013.  The study is 30 pages long and well worth the time to read if you are interested in the subject matter.  This study is different from others because the FBI focused on the 63 shootings (out of a total of 170 during the 14-year period) that had the most official investigative material.  They used only police investigation files and only looked at the cases where an in depth investigation of the suspect’s background was included.

This study examined the killers’ demographic characteristics, why the killers committed the crime, and what warning signs the killer provided before the attack.  It’s actually a pretty well-done piece of research.

I realize that for many of you, reading 30 pages of material is the intellectual equivalent of Chinese water torture.  For you TL;DR types, I will summarize the important points below.

Most killers obtained their guns legally.  According to a Daily Mail summary of the report:

“A combined 75 percent of suspects obtained their firearms legally for the purpose of the attacks, either by already owning guns — 35 percent — or purchasing them — 40 percent — to carry out their atrocities.

Others stole, robbed or borrowed guns.”

This tells us that additional background checks or waiting periods to buy guns aren’t likely to dramatically reduce the number of attacks.

As I’ve previously written, active killers spend a long time planning their attacks.  Seventy-seven percent of killers planned for at least a week.  Most killers planned for a one to two MONTH period before their attacks.  We have to catch more of these events during this obvious planning stage if we want to be effective at preventing these things.

Only 25% of killers had been previously diagnosed with a mental illness.  There may certainly be some un-diagnosed mental problems among the remaining killers, but this statistic really shoots down the idea that psychiatric drugs are causing all of these shootings.

Shooters generally displayed recognizable warning signs before the attack.  According to a summary at TheStar.com:

“The FBI study found that on average, each active shooter it examined “displayed four to five concerning behaviours over time.” About one in three shooters had made threats or confronted people they later targeted. More than half of them revealed their intentions to do something violent, a phenomenon called “leakage.”

The study’s authors write that there was “no single warning sign, checklist, or algorithm for assessing behaviours that” suggest a potential rampage shooter. But they say the study is meant in part to help members of the public keep an eye out for warning signs.

“One of the biggest findings for me is that there was one person in every active shooter’s life who noticed some sort of concerning behaviour,” said Sarah Craun of the FBI’s Behavioral Analysis Unit, the study’s third author. “Most of them had multiple concerning behaviours, between four and five. These were people who were already known to be struggling a little bit. There are actually some signs out there that people can see.”

The warning signs included threats and physical aggression, and the study found that most of the shooters “had a history of acting in an abusive, harassing, or oppressive way.” Others had abused their intimate partners or stalked people, highlighting again the recurrence of domestic violence in the lives of shooters before their violent attacks in public places.”

At least one person in every event studied noted concerning behavior on the part of the suspect before the attack.  Only 41% of those people reported the behaviors to law enforcement.  Given law enforcement’s historic lack of following up on these complaints (as well as the legitimate legal obstacles that impede such an investigation), I’m not sure I know what to do with this information.

I’d like to see more people report these killers during their planning stages, but I’m pessimistic that many police agencies wouldn’t or couldn’t do anything about the complaint.

Most of the active killer attacks happened in “gun free zones.” Check out this concurrent CPRC study (not related to the above FBI publication) for more details.

Seventy-nine percent of the killers were acting on an actual or perceived grievance (either personal or professional).  In 64% of the attacks, a specific person or group of people related to this grievance was specifically targeted before the killer continued shooting random people.  This is new information and is inconsistent with some previously published data.  It may provide an additional method in the future to help us identify the killers before the attack.

I think we need to spend some more time studying what type of perceived “grievances” lead to mass killings and the relation between “targets” and “grievances.”

The highlights I posted here are but a small part of the information contained in the report.  Anyone who studies active killer events should read the whole thing. 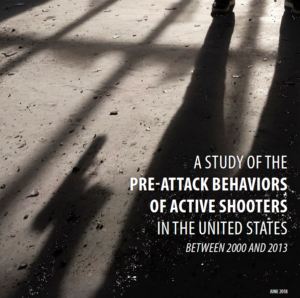