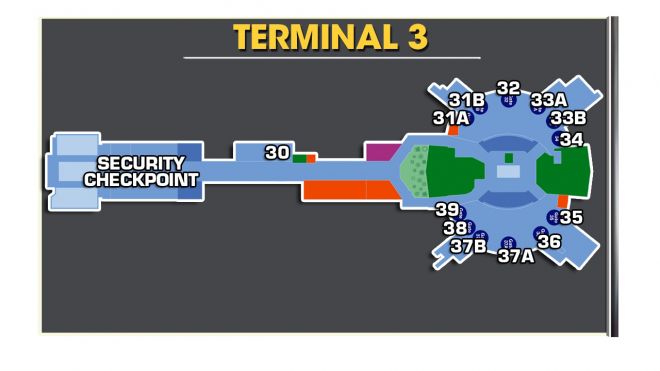 Since the shooting at LAX airport on November 1st, I’ve received lots of questions about how to stay safe in an airport when traveling.  Most of my readers carry weapons that can’t be carried past airport security.  Thus, their commonly relied upon means of defense isn’t available and they need an alternate defense plan.  It’s actually hard to give solid self protection advice for surviving airports.  Few good options exist.

America is one of the few countries in the world that allows relatively free access into the ticketing area of an airport.  In other countries, you will see lots of rifle-toting soldiers, checkpoints, and bomb sniffing dogs even before passengers get to the ticket counter or security lines.  It was only a matter of time before a terrorist or criminal chose to exploit this weakness.

Think about it…a terrorist could cause exactly the same result (mass casualties and a crippling strike to our economy) as bringing down a plane without ever having to board.  If terrorist groups bombed or shot up the unsecured ticketing areas of several airports sequentially, they would kill thousands and force Americans to stop flying.  And the terrorists could do it without having to remove their shoes at the security check or try to smuggle a bomb past the body scanner.  It would be easy.  That’s why the shooter at LAX chose that location to fire his weapon.

Here’s a brief video of the immediate aftermath…

I predict that we will see more attacks like this in coming years.  So what can we do to avoid getting killed?  Here are a few suggestions….

1) Don’t rush.  Get to the airport with plenty of extra time to spare.  When you are hurried and worrying about catching your flight, you aren’t paying good attention to what’s going on around you.  Not rushing to catch your plane will give you more time to keep an eye on your surroundings and avoid anything that makes you uncomfortable.  Download the My TSA App for your phone to get real time updates on delays and specific security wait times at the airport of your choosing.  Check the data and plan ahead so that you don’t have to hurry.

2) Do as much as possible to avoid standing at the ticketing counter.  Check your luggage at the curb (not allowed if you are checking firearms) or travel with a carry on only to avoid standing in the ticketing line.  Print your boarding pass at home.  The less time spent where people gather (especially lots of clueless people) the better.

3) Get through security as quickly as you can.  Even though our airport security is a farce, you are still safer inside the checkpoint than outside.  Don’t eat or have coffee in restaurants outside the security checkpoint.  Clear security quickly and then find a place to eat.  The best advice for clearing security quickly is in this Wired Magazine article.

4) Once you clear security, find your gate, any emergency exits, and any place where you might be able to acquire weapons for a more serious hostage situation or terrorist bombing.  Food preparation areas will generally have knives.  Maintenance areas will generally have tools.  Look for cleaning carts to find irritant chemicals.  You might need any of those items if things go bad.  Another phone app I find useful serves this purpose.  Gate Guru provides detailed maps of all major airports and lists of amenities and restaurants.  Pull up your airport terminal and check out the “lay of the land.”

5) Get away from as many people as possible.  Terrorists target large groups of people.  I’m a big fan of avoiding such groups and thus, I’m also a huge proponent of using airport lounges.  You will most likely have access to a lounge if you are traveling in Business or First Class or have preferred status with a certain airline.   Lounge Buddy is an App you can put on your phone that will tell you all of the available lounges and what the requirements are for entry.   You can also become a member of Priority Pass.  For an annual fee, you can get a set number of free lounge visits every year, even if you are flying coach. 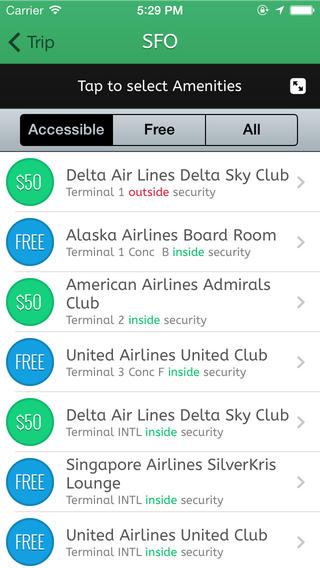 6) Weapons and Equipment.  To be honest, for most terrorist attacks, any weapons that you are able to legally carry through security are likely to be inconsequential to the overall outcome.  I really don’t think you will take out multiple suicide bombers with your “tactical” pen.

But most of you carry weapons on a daily basis, so I’ll go over a few options for airport carry.  My first recommendation is to NEVER SMUGGLE ANYTHING ILLEGAL THROUGH SECURITY.  Yes, some things may make it through, but I don’t think the risk of spending years in prison is worth the advantage of having a small knife or something of the sort.  There are better defense options available that won’t get you thrown in prison.

– Canes: Canes are legal on an airplane.  You don’t even have to feign a limp.  As long as the cane doesn’t have a sword inside, it’s pretty much allowed to go through….even nasty fighting canes like the TDI/KaBar model.  While I don’t think canes are the best weapon to use ON a plane, they work well in the airport and in the terminal.

– Flashlights:  You should definitely have a flashlight in your carry-on.  I always carry at least two.  One of them is a headlamp that allows me to see and operate without tying up my hands.  It also works great when you are trying to read and you happen to be in the seat with the malfunctioning overhead reading light.

In addition to the headlamp, I also carry a flashlight that I can hit someone with.  I usually end up carrying a Surefire or Fenix brand light that uses two CR123 batteries.  They are bright, durable, fairly light, and perfect to use to defend yourself from a serious criminal

– Tactical pens:  Some pens are made stoutly enough to serve as impact weapons.  I would avoid the ones that are spiky or look like a weapon.  Those may be confiscated by TSA.  I prefer the lower profile tactical pens.  I carry one made by my friend Rick Hinderer all over the world and have never had an issue.

It’s probably a good idea to pack a pre-stamped, self addressed envelope in your carry-on bag.  If for some reason the TSA doesn’t like your pen or flashlight, you can mail it home to yourself.

-Improvised impact weapons.  Think along the idea of “a rock in a sock.”  A couple of D-cell batteries inside a long tube sock (put together after you clear security) makes a very nasty impact weapon.  I generally use an old biker weapon instead…a bandanna threaded through the hasp of a padlock.  You are limited only by your imagination. 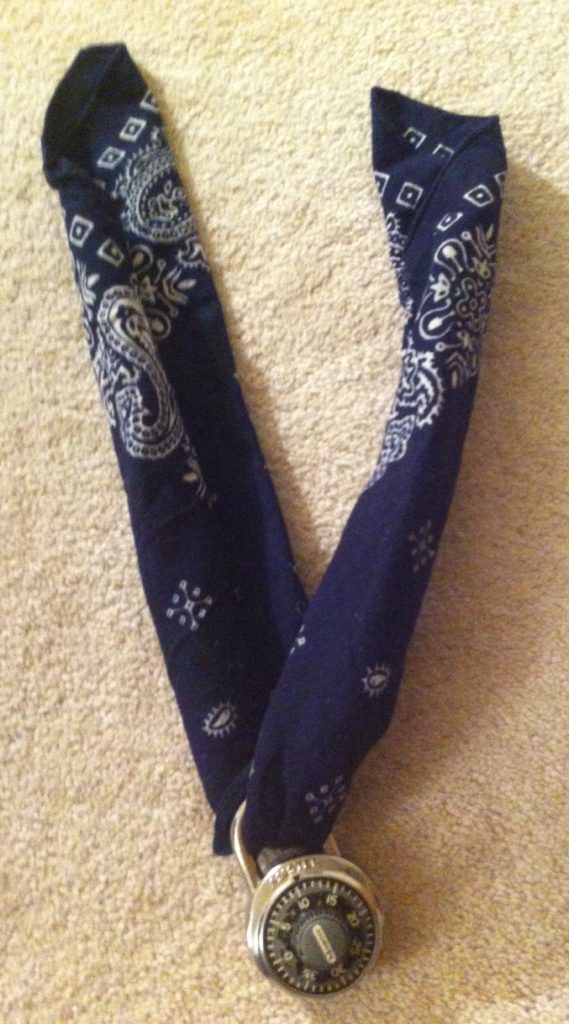 Neither bandannas nor padlocks are prohibited by the TSA….

7) Medical Supplies.  Don’t forget medical supplies.  The first aid kits on airplanes are laughably sparse.  And if something really bad happens in the airport, you shouldn’t expect to get help quickly.  Check out this article if you don’t believe me…

LAX security officer bled for 33 minutes as help stood by

In addition to the large medical kit I have in my checked bag, I also carry a smaller kit on my person or in my carry-on.  All the items inside must be TSA-legal and small enough that they don’t take up much room.   Mine is carried in a small Blackhawk nylon pouch.  Inside, I carry the following:

– A “snivel kit” with bandaids, OTC meds, antibiotic ointment and the like

– A Triangular bandage, carabiner, and key ring.  The bandage can be used for many conditions.  When I put the three together, I can make another tourniquet ala Paul Gomez (see video below) 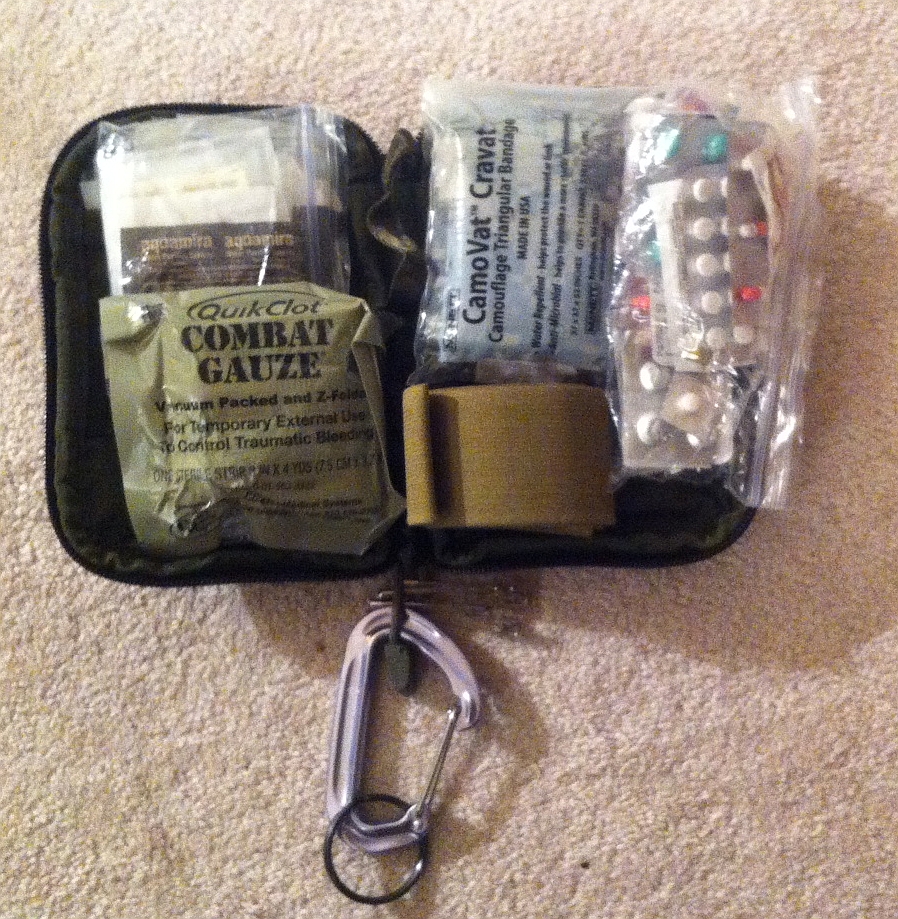 My airplane first aid kit (since photo was taken, I’ve replaced the TK-4 tourniquet with a CAT)

Having traveled to more than 50 countries in the last 15 years, this stuff is important to me.  I hope I gave you a few ideas to help keep yourself safer.