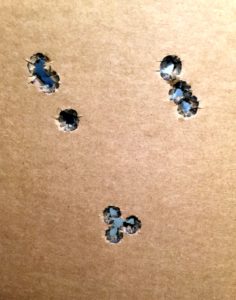 I first shot this drill in a speed shooting class I took with Rob Leatham.  Rob thought it was a fun drill and a very good test of trigger control.  I agree.  It’s one of my favorite drills to shoot, being both fun and frustrating at the same time.  Master instructor Ron Avery also used the drill in his “Advanced Tactical Handgun Skills” class.  It’s a fairly popular drill with competition shooters, but it doesn’t seem to have filtered down to tactical or recreational shooters.  That needs to change.

You can shoot the drill at any distance you choose.  I start most newer shooters somewhere around five feet away from the target when they give it a try the first time.  It’s harder than it looks!

Find an empty section of cardboard target backer or an area of the target you haven’t shot up.  It doesn’t have to be a large space; you are only going to be firing three shots.

For the first shot, fire a round anywhere onto your open target space using two hands on the gun.  That bullet hole will be your target for the next two rounds.  For the second shot, fire STRONG HAND ONLY and try to place the bullet into your first hole.  Transfer the gun to your weak hand and fire a third shot WEAK HAND ONLY.  The goal is to have all three shots touching…in essence making a single hole or a cloverleaf pattern.

I like to use this drill as a “finisher” in my classes.  I always try to end my classes with a bit of slower precision shooting so that students leave the class having shot their last few rounds as accurately as possible.  That’s the skill I want them to retain should they get into a gunfight before their next practice session.  When the learning objectives of my pistol class have been achieved for the day, and students still have some extra practice rounds left in their magazines, I have them shoot the cloverleaf drill.  Many of my students get addicted to the frustrating drill and shoot dozens of rounds trying to put three bullets into the same hole.  It’s fun for them and it reinforces perfect sight alignment, trigger control and single handed shooting skills.

Give it a try at five feet on your first effort.  If it’s easy, move the target to 10 feet.  Although highly skilled shooters might be able to do it even farther away, you’ll see most students becoming unable to complete the drill somewhere between eight and 12 feet.  Some of my students will be regularly able to do it at 15 feet, but that’s pretty rare.  Start close and gradually move the target back as your skills increase.

I hope you find it as addicting as I do.