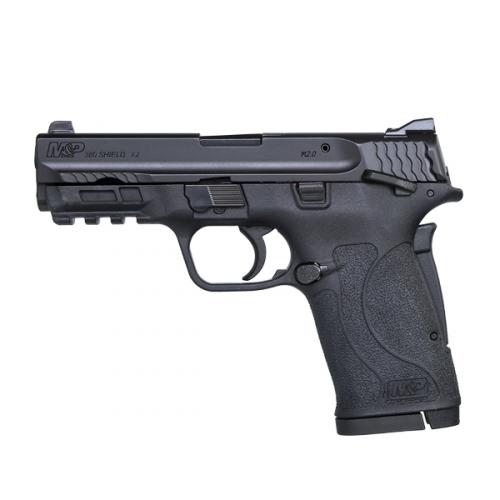 I’ve been hearing some good things about the new S&W Shield EZ.  It was introduced about two months ago.  Smith and Wesson designed it to be a gun that could be used for concealed carry or home protection by those who are extremely recoil sensitive or those who lack the hand strength or dexterity to rack the slide of another semi-automatic pistol.

I have a couple of friends who work the gun rental counters at Blackwing Shooting Center and LEPD range.  Both reported that the Shield EZ guns that the ranges rented out to students had been holding up well, with no malfunctions.  One of my friends  told me that he had recently taught three different one-hour handgun shooting lessons to beginning elderly shooters with the EZ.  Even though the students were complete beginners, he didn’t see a single malfunction with the Shield EZ.  That’s a fairly amazing feat, especially for a brand new design.

Last week, when I was doing my regular shooting practice at LEPD Range, I asked to borrow their rental Shield EZ so that I could put a few rounds through it.  They graciously loaned it to me for a little while and I put 50 rounds through it.  By no means was my shooting session a complete evaluation, let alone a true torture test.  I just put some rounds through the gun to see how well it shot.  I really like it.

The gun starts out as being very similar to Smith’s 9mm and .40 Shield line of pistols.  It has a very unobtrusive grip safety that the original Shield lacks.  The barrel is also about a half inch longer than the Shield.  It’s chambered in .380 acp and is available both with and without an ambidextrous thumb safety.   The shooter can also change which side he places the magazine release button, a feature not available on the original Shield pistols.

Besides these features, what really makes the EZ unique is the ease of operating the slide and loading the magazine.  It was impressive.  The slide racked like an airsoft gun.  I really don’t know how they got the gun to function with the extremely light recoil spring.  ANYONE can rack this slide.  I guarantee it.

The magazine was also very easy to load.  It had a small lever on the side (like often found in .22 rimfire auto pistols) to help compress the spring to make loading easier.  The magazine holds eight rounds and is much easier to load than either my Glock 42 or my Ruger LCP. 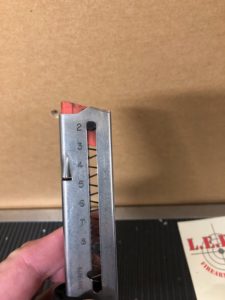 Magazine with lever on the side for easier loading

I started out by firing the first magazine slow fire at a bullseye target at 30 feet.  It’s not the best work I’ve ever done with a pistol, but it was a pretty small group for a compact .380. 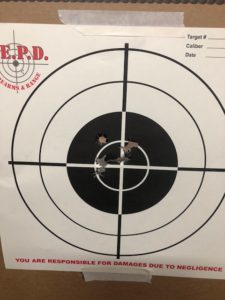 First 8-round group at 30 feet

I kept the target at 30 feet and did some rapid fire doubles and triples.  I then shot a magazine each with right hand only and left hand only intentionally trying to “limp wrist” the gun.  I couldn’t make it malfunction.  I then moved the target back for a few rounds at 15 yards and at 25 yards.  I’m happy to say that I kept all the rounds in the scoring rings even at the longer distances. 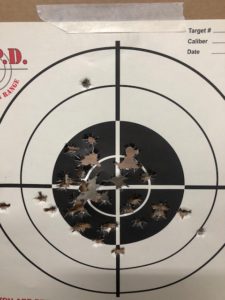 Even though the rental gun was dirty and wasn’t well lubricated, I did not experience any malfunctions with the 50 rounds of S&B ball ammo I shot through it.

Recoil was light, similar to the recoil of the Glock 42, but easier to control due to the full hand grip the Shield EZ provides.  The trigger seemed to be about the same length of pull and weight as the original Shield, with a slightly mushier reset.  The model I shot had the ambidextrous thumb safety.  It was ergonomic and easy to use.

I think Smith and Wesson hit it out of the park with this one.  It’s an ideal pistol for its intended audience.

Don’t rush out and buy one yet.  I never recommend buying brand new guns as they always have bugs to work out.  The Shield EZ is no exception to that rule.  It seems they are having a little bit of trouble with the thumb safety spontaneously engaging with heavier loads.  They have put out a factory consumer advisory for the thumb safety version of the gun and will repair the problem free of charge.  I did not experience the problem on the model I tested.  I would prefer to carry the version of the pistol without the thumb safety anyway.

Wait a few more months for more bugs to be identified and fixed.  Then you should seriously look at this pistol if you have any recoil control issues or problems racking the slide.  I don’t see this gun being part of my everyday carry line up, but I will eventually be purchasing one for range use with new students.

You folks will like this one.  Thanks to Smith and Wesson for being so innovative and to LEPD Range for lending me their gun to try! 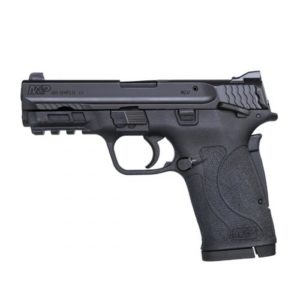