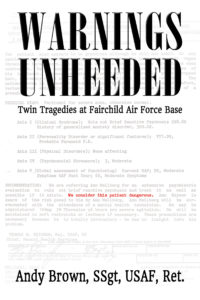 In 1994, Fairchild Air Force Base in Washington state was the location of two horrendous tragedies.  One was the crash of a B52 bomber during an air show practice session.  The second was when an active killer targeted the base’s hospital, killing five people and wounding 22 more.  Andy Brown, an Air Force Security Police Officer, stopped the active shooter attack by killing the gunman.  Now, more than 20 years after these events, Andy Brown has written a book detailing the events leading up to both tragedies.

The description of the incidents from Andy’s website is as follows:

“The gunman was a former airman who had mental health issues when he joined the Air Force in 1992. Throughout his short Air Force career he was referred for mental health evaluations at several military installations and spent three months in the psychiatric ward of a military hospital. By the time he was discharged from the Air Force he had fixated on a psychologist and psychiatrist at Fairchild’s hospital, who he blamed for ruining his career. He armed himself with a rifle and took revenge on a hospital full of men, women and children. The heroic actions of the patrons and staff inside the hospital saved countless lives although few managed to escape the effects of mental trauma.

I was a Security Policeman and was the first patrolman to reach the scene. I confronted the shooter outside of the hospital and engaged him with my Beretta M9. I prevailed in the gunfight because I had prepared for a lethal force encounter, but I wasn’t prepared for the traumatic aftermath.

Four days after the shooting a pilot, who many airmen had refused to fly with, crashed a B-52 while practicing for an air show.

The events that led to the shooting and the crash share a common theme. The behavior of the pilot and the gunman led people to warn their superiors of impending tragedy. Tragically those warnings went unheeded. The more we learn from our history the less likely we are to repeat it. But, until we are able to prevent these tragedies, we as responsible citizens and police must be prepared to intervene. Learn from history, remain vigilant and trust your intuition.

Andy goes into incredibly deep detail in this book about the events leading up to both disasters.  He details all of the problems identified with the bomber pilot that continued without intervention.  He then details the background of the active shooter and all of the psychiatric symptoms he displayed.  No one intervened significantly in that case either.  The lack of substantial intervention in both cases caused a predictable escalation that led to needless death and suffering.  This book tells the story of how that happened and how it might be prevented in the future.

You’ll like this book if you have any interest in active killers.  Andy truly did his research here.  The shooter’s problems starting from the day he enlisted are described in extensive detail.  The reader watches the events occur like a runaway train, knowing tragedy is the only possible outcome while simultaneously being unable to alter the course of history.  In addition to gaining an incredible amount of insight into the mental processes of a killer, the shooting itself is described in tremendous detail.  Andy provides a step-by-step description of every action the killer took that day and how each victim was killed or injured.

Andy goes on to describe his preparation for the event and how he trained to prevail against a crazed assassin.  He also describes how the actions he took that day led to depression and psychological problems that haunted him for years.

As he tells the story of the killer, he parallels it with the story of a reckless pilot who crashed a B52 four days after the shooting.  The career track of the pilot was shockingly similar to the path of the killer, with problems being constantly noted, yet never seriously addressed by supervision.  If you’ve been in the military or are interested in bureaucratic inefficiencies, you’ll also like the book.  You will truly feel the frustration of those who reported the conduct of both the pilot and the killer, only to be ignored by superiors more interested in promoting their own careers than doing the right thing.

I found the book educational from both the standpoint of a researcher interested in active killer events and as a government employee who deals with constant bureaucratic nonsense.  It was a compelling read and I truly enjoyed it.  I think you will too.

You can purchase the book through the author’s website or at Amazon.com.

FTC Disclaimer:  The author provided me with a pre-release electronic copy of the book free of charge.  He did not provide this copy in exchange for any review or mention on this website.  I am receiving no compensation from the author or publisher for the sale of this book or for providing this review.

If you purchase this book from one of my Amazon.com links, I get a small percentage of the sale at no extra cost to you.