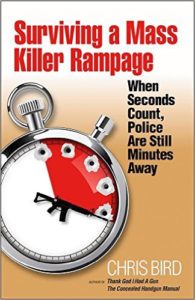 I recently read a book about active killers that many of you will enjoy.  Surviving a Mass Killer Rampage by Chris Bird was just released and is one of the better books available on the topic.

Unlike many books, Chris looks at the problem through the eyes of both police officers and everyday citizens and provides suggestions for both groups about how to correctly respond in an active killer attack.

The author used a unique structure for the book.  He took a look at 12 different historic attacks that each caused significant changes in the thinking about active killer response.  He deeply analyzed each incident and then covered the lessons we learned from it.  The incidents range from the 1966 Texas Tower incident, through the Luby’s cafeteria shooting, to the school shootings in the late 1990s and end up discussing some of the symphonic terrorist mass attacks that have recently occurred in other countries.

As the author describes each incident, he draws on the training he’s taken to offer suggestions for action.  The author went through the Armed Teacher (FASTER) course at TDI, ALICE training for unarmed school staff, and the active killer response class we teach to police and CCW carriers at TDI.  He provides detailed debriefing of each of these classes as he covers the lessons learned from past attacks.

The author took great notes in the classes he participated in and he quotes often from all of his instructors (myself included).  The author covered the advice I give in my classes about tactical first aid and terrorist bombings in the context of an active killer crime scene.  He also covers a lot of practical skill sets that aren’t often spoken about outside the walls of the training classes we teach.

Even though I’ve been studying these events for years and teaching frequent classes in active killer response, I still learned a lot from this book.  I think you will too.

As the author says: “When seconds count, the police are still minutes away.”  It’s a sobering, but accurate thought.  You are on your own.  This book will help you make it through.

Surviving a Mass Killer Rampage is available immediately on the Privateer Publications website and will soon be released to Amazon.  You can also find it at your local bookstore.

If you would like to see more book recommendations, check out my Recommended Reading page.

FTC disclaimer:  I received a complimentary pre-release copy of this book from the author.  I am not being compensated for this review by either the author or the publisher.