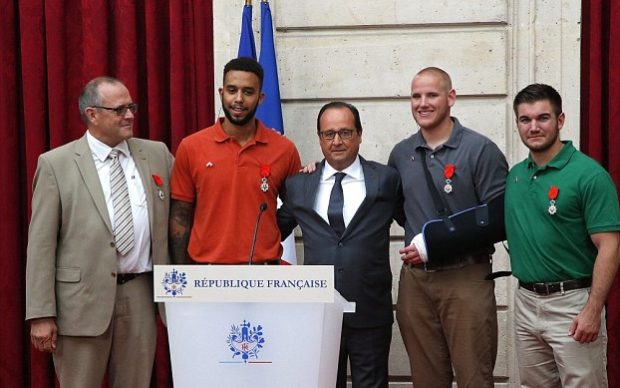 You can prevail against an active killer even if you are unarmed.

One of the most famous cases where unarmed men stopped an active killer was on a train traveling between Amsterdam and Paris a few years ago.  Four unarmed Americans and one unarmed Brit teamed up to take out a terrorist active killer armed with an AK-47.  A complete news account and timeline of the extraordinary act of heroism is available HERE.

When we look at past active shooter events, we see that the most successful outcomes happen when an armed individual immediately takes action and shoots the killer.  Effective armed resistance is by far the best strategy both for individual survival and to save the largest number of potential victims.  If armed resistance is not possible, I generally advise people to escape.  Running away from the killer is a remarkably effective strategy as well.

With that in mind, place yourself in the situation described in the article above.  You are on a speeding train.  You are in Europe where you can’t carry your firearm.  Armed resistance and escape aren’t possible options.  You have to do something else.  These folks chose to fight the attacker, even though they were outgunned.  They fought and they won.  We need more people willing to take such risks.  Even more importantly, people need to know HOW to effectively fight against an armed attacker using their bare hands, teamwork, or improvised weapons.

The advice in this article should not be taken to encourage the unarmed attack on an armed terrorist or active killer as the ideal response option.  Fighting unarmed against a weapon is an incredibly dangerous thing to do.  If you want to see how dangerous it is, check out this article that describes numerous situations where an unarmed intervention failed against an active shooter attack.  With that said, unarmed attacks against armed killers frequently do work.  Ron Borsch’s research on active killer events suggest that roughly one half of active killer attacks are stopped during the shooting.  Nearly 2/3 of the killers who are stopped are stopped by UNARMED citizens.  Police stop less than 20% of active killers during their act.

Going unarmed against an active killer is a dangerous thing to do, but it may be your only option.  Here’s how to stack the odds in your favor:

You may have to wait for a better opportunity.   Charging headlong towards a man firing an AK-47 isn’t a recipe for success.  If possible, get yourself to cover or concealment first.  In an active shooter event the gunman will likely be shooting fast.  That means that he will run out of ammo fairly quickly.  If you can wait a few seconds until his gun is empty and he’s in the act of reloading, it’s much safer to initiate your attack then.

Set up an ambush.  The head-on charge usually isn’t the best plan.  If you can hide behind cover and wait for the killer to pass you, you’ll have access to his back.  You don’t have to fight fair.  Approach him from behind and hit him in the head with something hard.  Many of you carry pocket knives, even in areas where you can’t carry your gun.  Approach from behind and bury the blade into the side of his neck.  Once it it buried to the hilt, aggressively “stir the soup” with the handle of the knife.  You can also plunge the blade straight downward into his chest cavity from behind.  Aim to penetrate just above the collar bone and target the knife straight downward.  Just like the previous technique, aggressively rotate the handle of the knife to cause more damage.

If you have a little forewarning, you may be able to set up an ambush at a natural choke point or from a “hard corner.”  A choke point is any narrowing of a passageway that funnels movement.  Think about a doorway.  That’s a natural choke point.  Only one person at a time can go through the doorway and everyone who enters the room must follow the same path through the door.  The close quarters nature of the choke point (often also called a “fatal funnel”) makes it difficult for multiple shooters or terrorists to target you (the defender) at the same time.  It also provides a location where the movement of the shooter is extremely predictable.  That makes it an ideal place for you to set up your ambushing counterattack.

A hard corner is a corner around which a person cannot see without somehow exposing his body or entering the room.  Think about a doorway into a classroom or office.  The doorway is usually placed in the center of a wall.  Immediately inside that doorway (on either side) is a space that can’t be seen from the hallway.  In order to see the side of the doorway from the hall, a person would physically have to stick his head into the doorway.  That makes him vulnerable to attack.

When you set up your ambush in the “hard corner” of a room, it is almost certain that you will see the attacker before he sees you.  When people enter rooms, they don’t do so by leading with their head.  Usually a leg or arm is the first body part to round the corner.  By the time his head (the part that can see your ambush) has rounded the corner, you are already initiating your attack. 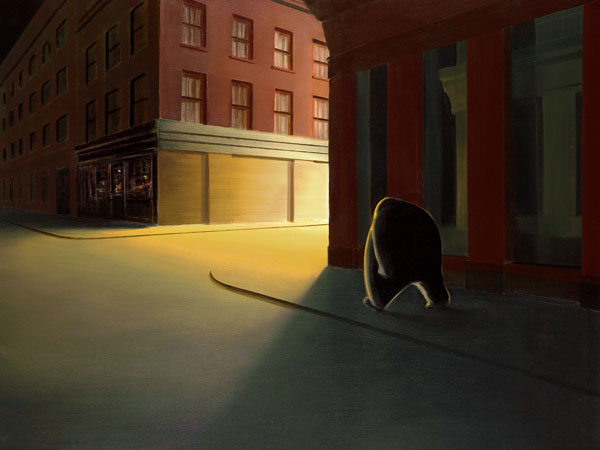 Get some help.  The courageous defenders on the train in France used teamwork to stop the shooter.  You should too.  If you have time, plan an attack from one of the ambush positions I identified above with willing friends or co-workers.  If there isn’t time for a plan, you may have to start the attack yourself.  As you are fighting the shooter, call out for help.  Give people specific instructions what you want them to do.  Sometimes people are frozen in fear.  They want to help, but don’t know what to do.  Yelling: “You!  Grab his gun.” or “Somebody hit him in the head!” may be all the instructions needed to cause bystanders to spring into action.

I’ve tested several ways to go unarmed against an armed shooter in various training courses I’ve taught.  If you have a small group of people, designate the first person to go for the shooter’s weapon.  Ideally, that person will take the weapon away from the shooter, but even if he just deflects the muzzle so that others aren’t shot, he will be accomplishing the goal.  Immediately following the person charged with handling the weapon, will be one or two others who hit the shooter as hard as they can with the goal of knocking him to the ground.  What I’ve found is that one person hitting high (chest or head level) and another person hitting low (tackling at the knee level), usually brings the attacker to the ground very quickly.  Once on the ground, the weight of the multiple defenders can be used to effectively reduce or control the attacker’s momentum and prevent him from accessing additional weapons.

It sounds complex, but is really quite simple.  You and two friends set up in a hard corner.  The instructions go something like this: “I’ll go first and try to take his gun.  You follow me immediately and wrap up his arms or hit him in the head.  You (to the next person) follow him and tackle the shooter at knee level.”

Once you get the attacker on the ground, beat him in the face with any hard object you can find.  Cut his throat if you have a blade.  If you know how to sink a good choke, put him to sleep.  Most active killers have more than one weapon (the French train shooter had an AK-47, nine spare magazines, a 9mm pistol, and at least one knife).  Even if you wrestle one weapon away from him, he will likely have others.  You need to act quickly to kill him or make him unconscious so that he can’t draw another weapon and continue his attack.  If you are unable or unwilling to knock the attacker out or kill him, use the weight of multiple people to hold him down as you bind his hands and feet with shoe laces, belts, or purse straps.  When he is immobilized, search him and remove any additional weapons he may be carrying.

Chokes and Improvised Weapons can be game changers.  You want to stack the odds in your favor as best as you can.  The goal is to end the fight as quickly as possible so that more people don’t get hurt or killed.  Take your cue from the courageous defenders on the train:

“I was able to grab him again and choke him unconscious while Alek was hitting him in the head with the pistol or rifle.”

They used both a choke and improvised weapons (the shooter’s own guns as impact weapons) to take the shooter out of the fight.  Think about possible improvised weapons that may be on hand.  Grab anything heavy and hard and use it to smash the shooter’s head.  Fire extinguishers are common in public places and work great to crush skulls.  You are limited only by your imagination.

Be cautious, however, about using the shooter’s firearm(s).  The police will be coming fairly quickly in an active shooter event.  If the only description the cops have of the shooter is “a white male with an AK-47” and you are standing there beating the attacker unconscious with his own AK-47 rifle when they arrive, what do you think the cops are going to do?  You could very easily be mistaken for the shooter if you are using his weapons against him.

Learn how to choke someone unconscious.  It’s not hard.  It can be taught by a good Judo or BJJ instructor in just a couple hours.  Seek out a quality grappling instructor and pay him for a couple hours of private lessons on applying chokes.  They are the fastest and most reliable way to make people unconscious quickly.

This article was meant to provide basic instructions for how to go unarmed against an armed killer.  Most of you reading this could have probably figured out all the things I mentioned.  The question you must ask is “Can your mother, little sister, or elderly co-worker figure this stuff out?”  The answer is probably “no.”  Please share this article with those people.  You folks who are fighters get this stuff.  Share this information with your friends and relatives who don’t have such an in-depth understanding of the concepts.  Those are the people who will benefit most from the ideas I’ve written about.