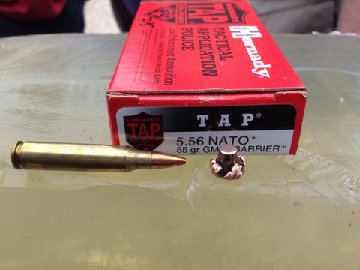 This is a guest post written by retired police chief Jeff Chudwin.  Jeff is a well known law enforcement trainer and has served as the president of the Illinois Tactical Officers Association.  Jeff recently sent out an email to a list of police firearms instructors describing his gelatin testing of numerous .223/5.56mm self defense rounds in his police rifle classes.  The tests were so thorough that I wanted to share them with all my readers.  Jeff graciously agreed to allow the reprint of his work.

This is a great reference for any of you who rely on the AR-15 as a defensive weapon.  Choose the best round that will accomplish your individual mission and penetration parameters.

Many people have asked me for information about .223 / 5.56 ammunition performance for patrol or  SWAT operations.  We’ve tested most of them, so I compiled the gelatin testing results from our previous class last August.

The good news for consumers is that there are more defensive rounds available than ever before.  Ammunition companies are continually improving their ballistic technology.

Here are the results we’ve obtained through testing using calibrated ballistic gelatin and the FBI gelatin testing protocols.  Specifications of the test are listed below:

-Auto glass testing consisted of firing the rounds through A. S. I.  1/4″ laminated auto safety glass . 15″ x 18 “. Each panel was set at an angle of 45 degrees to the horizontal.  The line of bore of the weapon was offset 15 degrees to the side, resulting in a compound angle of impact for the bullet on the glass.   The gelatin block was set 18 ” behind the glass.

Here are the results from some of the rounds we tested: 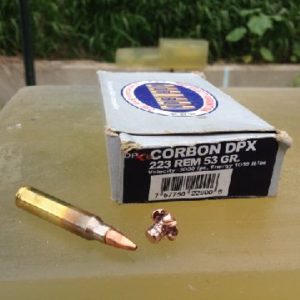 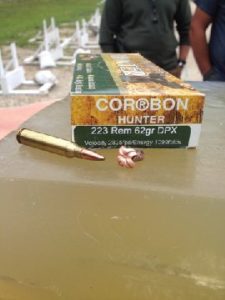 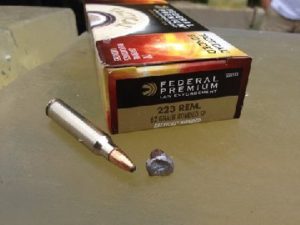 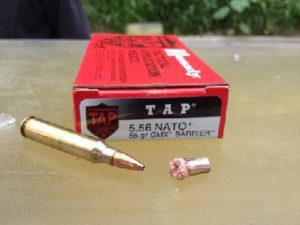 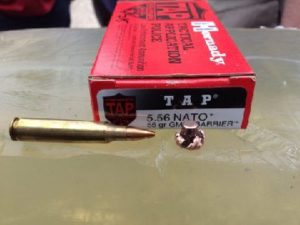 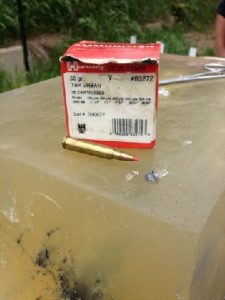 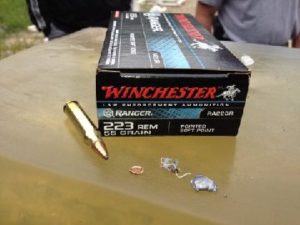 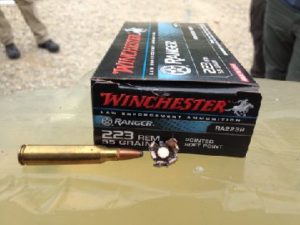 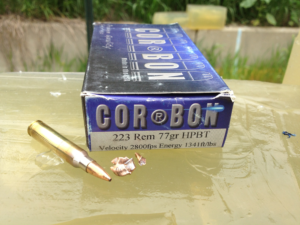 As seen, the solid copper alloy projectiles (DPX and GMX rounds) expand in soft tissue stimulant and easily defeat  glass barriers.  Against a hard glass barrier. they retain their weight but have relatively little expansion.

The Federal Tactical loads lose approximately  30% of the bullet weight when fired through the auto glass. The Barnes X copper bullets used by Corbon and the Hornady GMX lose at most 10% of their weight in the same tests.
For police street work where auto glass and intervening barriers are very common, the DPX and GMX rounds are my choice.

The Federal Tactical is a good round with the noted limitation of losing a significant amount of bullet weight when fired through auto glass.  It performs adequately across a wide range of situations.

The heavier weight Open Tip Match bullets are very accurate in the fast twist rifle barrels and achieve adequate penetration as long as no intermediate barriers must be defeated.  They are a good choice for short barreled carbines.

There remains no single “magic bullet” that does exactly what is needed at any time and in any condition.  Pick the most likely environment in which you will fight and choose the round that best meets your needs.

Do not choose Hornady TAP Urban or any of the varmint-type bullets where auto glass, sheet metal, or barriers must be defeated.  Actual street events have proven that this type of projectile is a poor choice, as are any of the exceptionally light (under 50 grains) hollowpoint cartridges.

However, you may have to work in areas such as SWAT entry where over penetration through walls is not acceptable.  In those cases. a breakable bullet such as the TAP Urban can be chosen with the clear understanding that is has extremely limited penetration capabilities.

We have used dual magazines in a Redi-mag with both a bonded or all copper bullet and a limited penetration bullet like the TAP Urban available as needed.  Some find that to be a compromise that works.  It requires training and the capability to recognize under stress exactly what round you are loading in your rifle.   If choosing this option, magazines must be of two distinctively different types, identifiable both visually and by feel.

One ballistics guy I spoke with said, use the deep penetrating rounds and “do not miss“.  If it were only so simple….

I have also tested these rounds at 100 yards and beyond for accuracy. All shot within 2 inches and most far better at 100 yards.  Some of the light constructed bullets such as the Winchester 50 and 55 grain Silver Tip .223 are sub minute of angle (less than one inch at 100 yards) with my LaRue Stealth. For open-air precision shots, they are good stuff.

Can full metal jacket .223 /5.56 mm do the job?   All bullets can do the job in some fashion (where the environment allows) but these are not optimal choices when failure is not acceptable.   FMJ in either 55 grain or 62 grain is not my choice as it does not do well on either end of the spectrum.   The bonded or solid copper open tip bullets perform significantly better against hard barriers such as auto sheet metal or glass than the traditional lead core type.

For further study, Federal ammunition has great information on its website.  Dr. Gary Roberts has compiled an excellent list of defensive rifle cartridges as well.