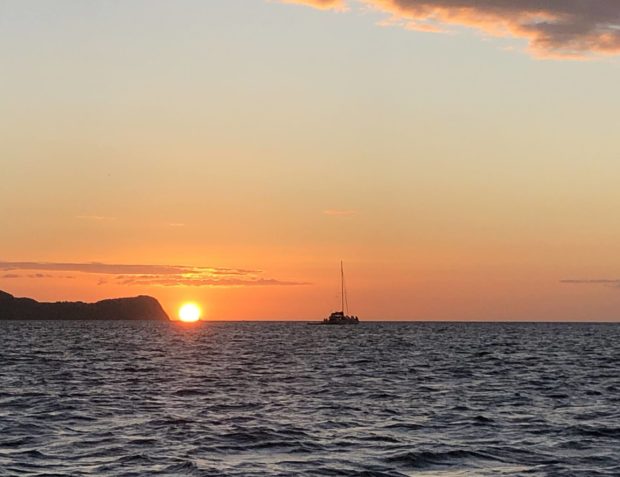 If you noticed some repeat (albeit edited and updated) content from me earlier in the week, it was because I was out of the country having a bit of fun in Costa Rica.

I had been to Costa Rica twice before.  I did a family tour of the country way back in 2002.  I followed that up with some white water rafting and surfing on another trip down there in 2011.

In both of those trips, I went all over the country, but I never made it up to the northwest corner (Guanacaste).  It was time to remedy that problem.  We had a few days off and decided we wanted a relaxing beach trip without much stress.

Our most recent prior “vacations” involved living in the Peruvian rain forest and some desert camping in Nevada.  Fun, but not really relaxing.  We needed someplace chill for this trip.

I booked us a condo near the tiny town of Playas del Coco and we hopped on the plane. 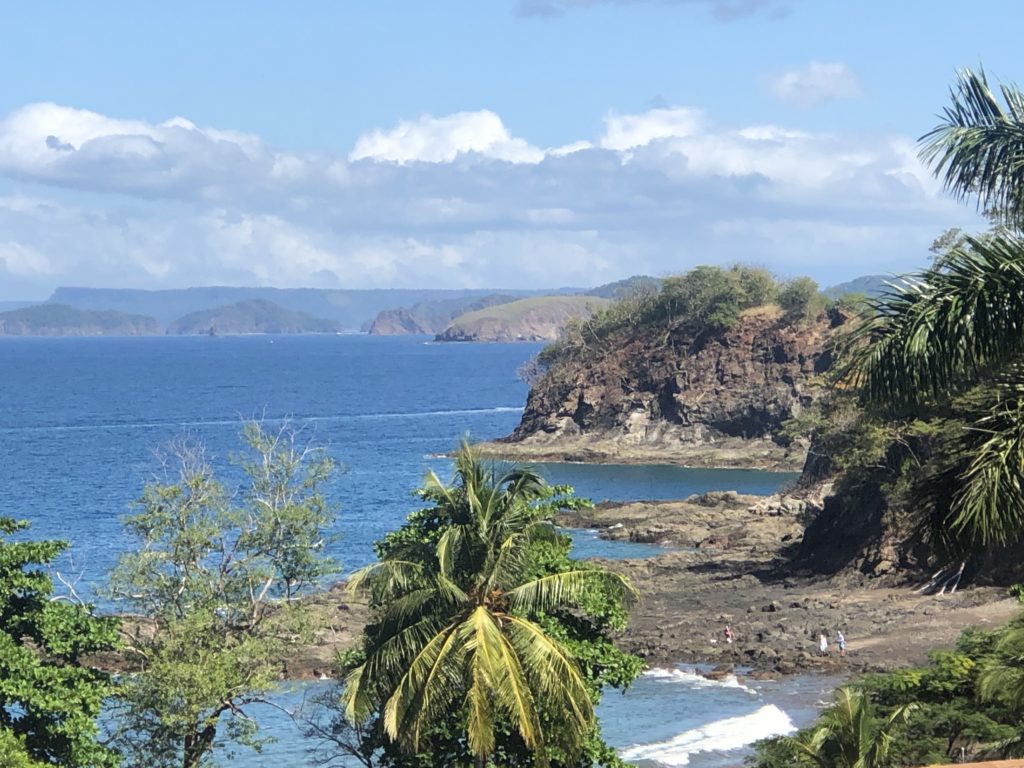 View from our condo

We were only down there five days and quite honestly didn’t do too much.  It was perfect.  We laid around on the beach, went snorkeling, and took a sailboat ride.  We ate some amazing fresh seafood (the Restaurante Citron was my favorite) and I read six books.  It was a nice break. 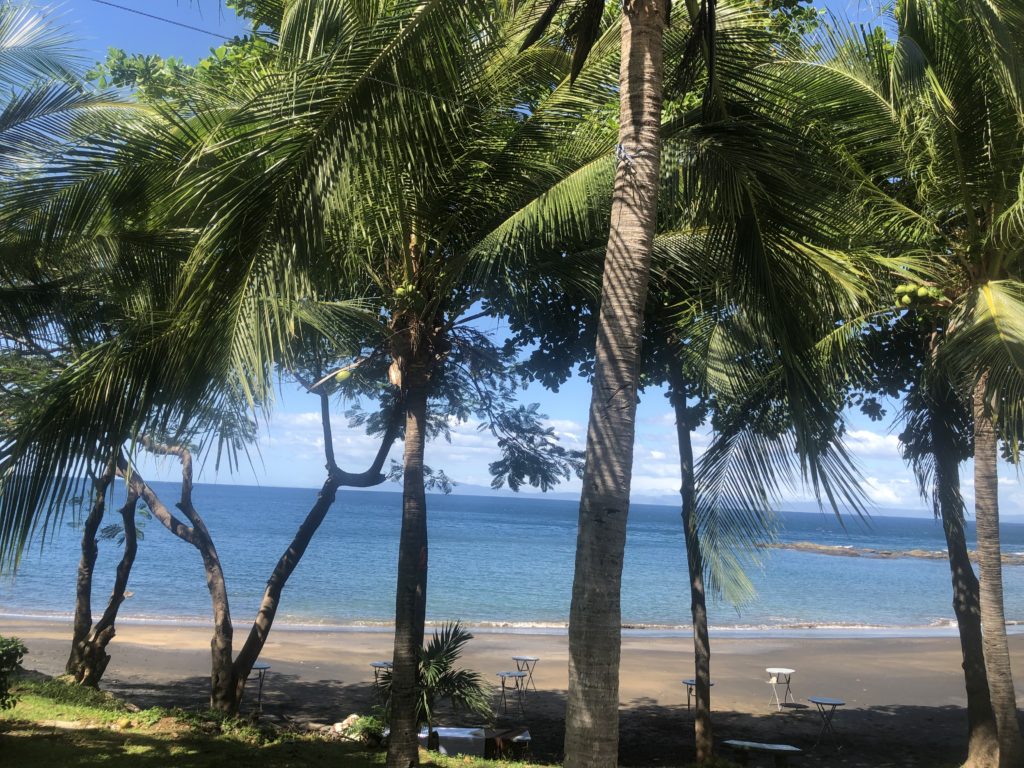 Knowing that you all like guns and tactics, I usually do a brief report on gun issues whenever I visit a new country.  I don’t have much to report on this trip.

Playas del Coco is a very sleepy little town full of friendly locals.  There is very little crime.  We had no altercations with criminals.  Despite the recent murder of an American citizen in the country, we didn’t see a even a hint of violence.  In fact, the cops we saw in town were unarmed, save one guy who had a huge riot club holstered across his back ninja sword style.

I saw one armed security guard (at the local grocery store) carrying a Smith and Wesson Sigma in a cheap nylon holster with the thumbreak cut off.  He had no spare magazines, handcuffs, or any less lethal options.

The cops at the Liberia airport were wearing what appeared to be Sig traditional double action automatics (maybe P226?) in Safariland ALS holsters.  I was happy to see that they weren’t using the Serpa as that seems to be a Latin American standard.

The cops had a nylon double spare mag pouches, but none of them were filled.  The airport cops generally wore the empty mag pouches either behind the gun or in the small of the back.  They had a handcuff case, but that’s the only gear they carried.

I didn’t see anyone carrying long guns.  Like I said, it’s a pretty chill place.  Costa Rica does not have a military and devotes the money it would normally spend on an army to education instead.  The country has a stunning 98% literacy rate.  Battling the sand flies on the beach was the most violent challenge we faced.

If you are interested, citizens and permanent residents in Costa Rica can get firearms ownership/carry permits.  The process involves taking a class, completing a psychological evaluation, and a criminal background check.  Carry permits require a short qualification course.  According to the locals I spoke with, citizens are barred from owning “military weapons” or “weapons of war” but I’m uncertain how that rule is actually enforced.

Interestingly enough, handguns are more common than long guns in the country.  That’s the opposite of many other Latin countries where citizens can own hunting firearms but not handguns.  Hunting is illegal in Costa Rica.  If you move down there, you won’t be able to justify your home defense pump shotgun or lever action rifle as a “hunting” gun like you can in other Latin American countries.

I found it amusing that when I was down there, my Facebook feed seemed to be filled with people posting their hotel “pocket dumps.”  This is my hardcore carry selection for when I went into town. 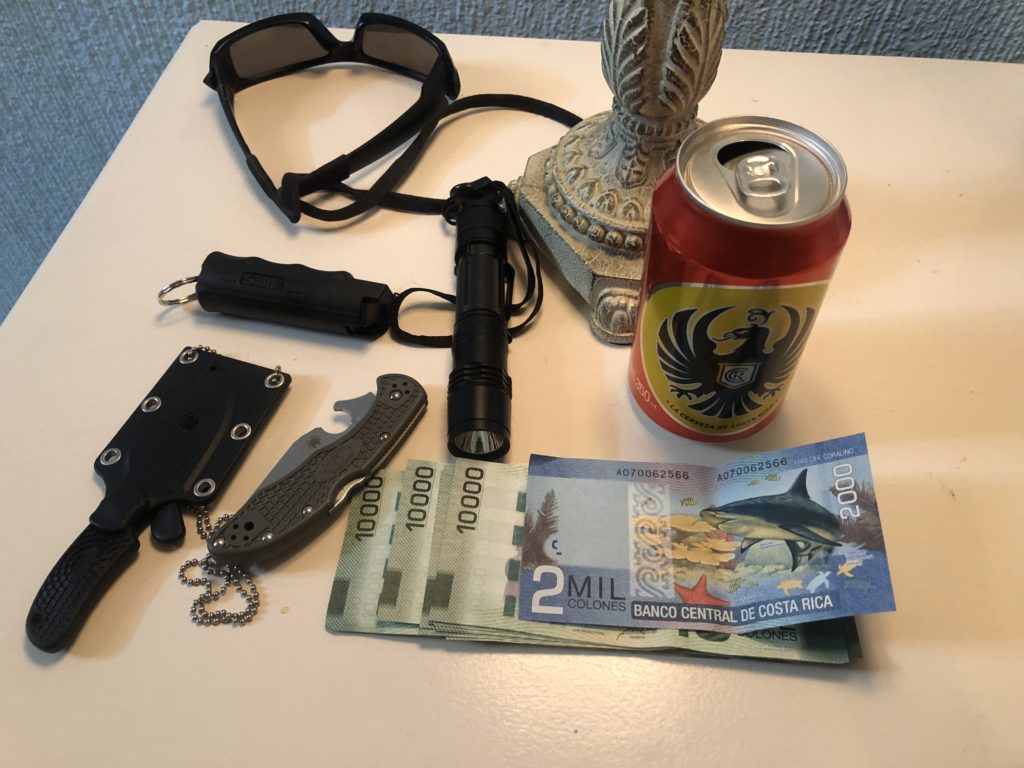 When I’m home my pocket dump looks like a lot of other folks’.  I carry a gun, spare mag, a couple knives, OC spray and a flashlight.   The picture above is what I rolled with down in Costa Rica.   There’s honestly not many problems I can’t solve with a blade, some OC spray, a flashlight and a bunch of cash.

Oh, and don’t forget a local beer. Not import (that implies you are too good for the locals), but the favorite local brew. Buying a few of those has gotten me out of way more trouble than my Glock ever has.

To be honest, my normal carry load out at home doesn’t teach me anything. I learn a lot more when I’m forced to interact in a strange and potentially dangerous environment relying on my charming personality and some cash instead of my gat.

It’s a practice I’ve found really valuable over the years.

For what it’s worth, I packed a Sabre Red stream pepper spray dispenser,  Fenix P35 flashlight and a Spyderco Ark neck knife.  I chose that one because its excellent resistance to salt water.  I could carry a decent weapon even when out in the ocean.

Honestly, the most dangerous condition you will likely face in C.R. is the horrible driving.  Other than the main highways, roads are in deplorable condition with massive potholes everywhere.  Narrow roads are shared by ATVs, bicycles, pedestrians, big trucks, motorcycles, and cars.  Often several of these are jockeying for position on the narrow roads at any given time.  The roads are dark and neither pedestrians or bicyclists use lights.

There are few street signs.  Addresses are difficult to find and the Ticos (what Costa Ricans call themselves) drive like crazy people.  You are risking life and limb every time you hop in a car in Cost Rica.

A lot of my friends who have never really traveled talk about retiring to Costa Rica.  While it’s certainly possible, the days of a truly cheap retirement down there are long gone.  It’s become one of the most expensive destinations in Latin America.

Property here is relatively pricey.  It isn’t California expensive, but probably on par with beachfront property in Florida.  A two bedroom 1200 square foot house on a cliff overlooking the ocean (no beach access) was $247,000 US.  A really nice house right on the beach in Guanacaste can easily run up to $700,000.

Cars are subject to a very large import tax and road conditions are really bad.  Food in restaurants is approximately 2/3 what you would pay in the USA.  Local produce and fruit is cheap.  Any imported electronic items are approximately 50% more expensive than in the USA.

The only thing cheap down there is manual labor.  Many expats have gardeners, maids, and cooks.  Talking to some of the locals, they say that manual laborers make the equivalent of about $2.00 US an hour.

It would be fairly easy to live there, but unless you want a huge bevy of servants, you probably won’t be saving a significant amount of money doing so.

We had a relaxing trip.  Back to normal programming tomorrow. 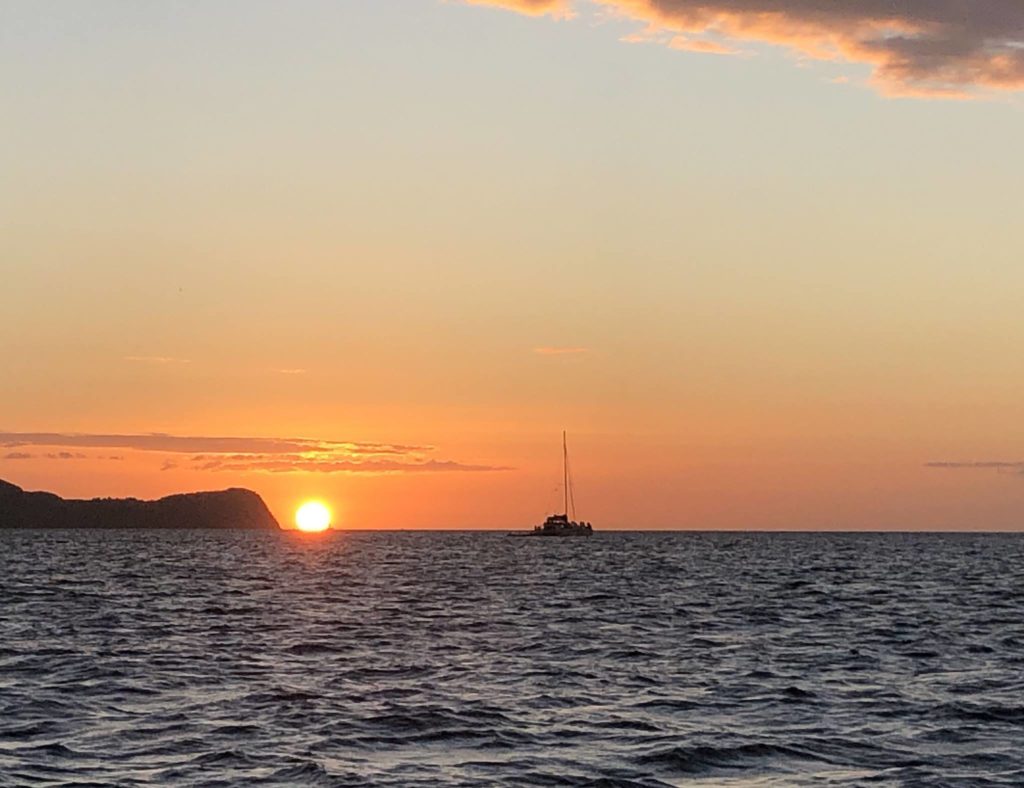 Costa Rican sunset from a sailboat in the Pacific Ocean.