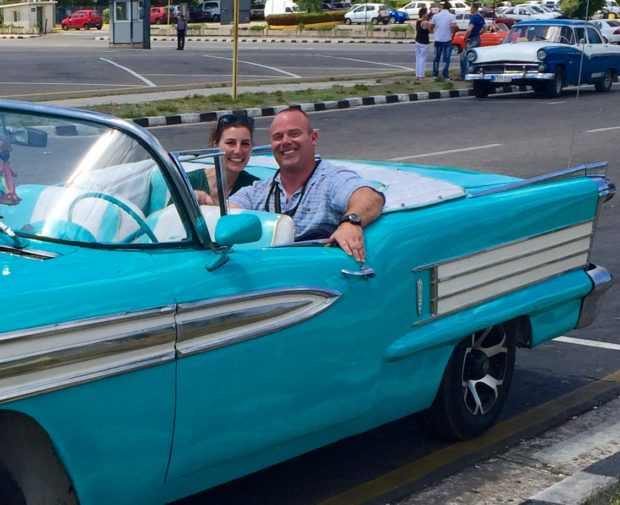 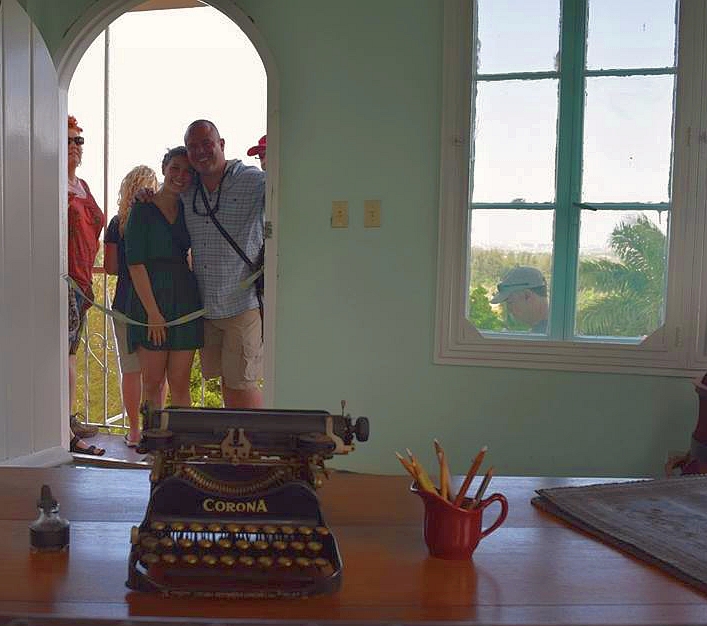 Lauren and I in the doorway of Hemmingway’s writing tower viewed from his desk.

Lauren and I spent last week on a short vacation.  Our primary destination was Cuba, where we spent four days in Havana.  As there are no direct flights for tourists from the USA, we had to catch a flight from Cancun, Mexico.  Since we both love the beach there, we spent some time before and after Havana enjoying Mexico.

We wanted to visit Cuba before it was fully opened up to an invasion of tourists from the USA.  Despite all the talk about dissolving the trade embargo, it is actually still illegal to visit Cuba as a tourist.  The only way you can legally do it is to meet one of 12 travel restriction exemptions.  Fortunately, writing a third world travel safety book gave me enough credence to qualify under the “journalism” exception.  It turned out to be a moot point.  US Customs and Immigration agents didn’t even comment on our destination when we returned home.  No justification necessary (although I had the draft copy of my book just in case).

We had a great time in Havana.  We walked all over the city, visited tons of cool museums, drank mojitos, saw some live music in the legendary jazz clubs, and rode around in some classic American cars.  Travel there isn’t easy.  Due to the trade embargo, none of the Cuban merchants take credit cards drawn on US banks.  That’s a nightmare because it means you can’t pre-book a hotel or rental car.

The ATMs don’t work for American bank cards either.  We had to carry lots of cash and pay for everything that way.  Unfortunately, there is a huge penalty for trading US dollars for Cuban Pesos (20% fee).  We circumvented that by pulling out Mexican Pesos from the ATM in Cancun and then converting them to Cuban Pesos at the airport in Havana when we landed.  We got around the hotel issue by renting an apartment on AirB&B instead.

I had some preconceptions about what I would see in Cuba, but I really wasn’t ready for the reality we faced when we landed.  Here are the things that surprised me the most:

1). The deteriorated infrastructure.  Roads and sidewalks were in horrible disrepair.  Turn of the 20th century buildings have not had any improvements in 60 years.  Swimming pools and city parks were abandoned.  It was almost like being in a war zone.  The people and the government just don’t have enough money to maintain their buildings and infrastructure. 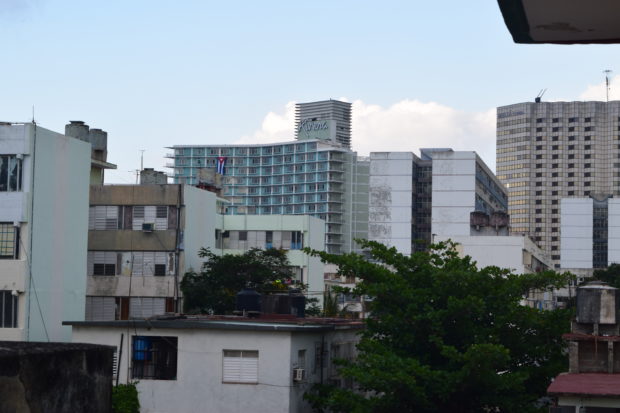 2). The high unemployment rate.  I was amazed at the numbers of people aimlessly hanging around in the streets during normal working hours on a weekday.  No one seemed to be working.  We had hired a taxi driver to shuttle us around, so I asked him about it.  He told us that almost all of the jobs are controlled by the government (it is a Communist country, after all).  Most jobs have very low pay.  The average Cuban makes the equivalent of $25 US dollars a month!  Can you imagine trying to live on that?

Our driver told me that he was formerly an engineer.  He said that the most money he ever made in his government engineering job was $70 a month.  It wasn’t enough to feed his family, so he quit.  Now he drives a taxi and makes a lot more money.   Many Cubans have eschewed government employment for piece meal work in the tourist industry.  It pays better and requires less effort.  It doesn’t take much work to make $25 a month in tourist tips.

3) Food shortages.  Since we had an apartment, our plan was to buy breakfast and lunch foods at the grocery store to prepare ourselves.  That didn’t work out so well.  We went to the largest grocery store in the best neighborhood in Havana.  There were no eggs, dairy products, fresh fruits, or fresh meats available for sale.  The supply chains furnishing the government run grocery stores have some serious flaws.  It’s rare that the stores regularly have any of these items.  Thankfully, we brought some protein bars from home that we were able to eat for breakfast each day. 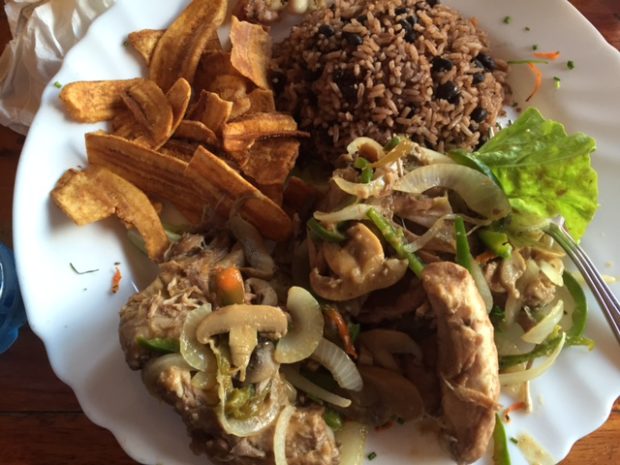 The restaurant menu choices reflected some of the difficulty getting certain foods. No steak today. This is my dinner of stuffed rabbit. 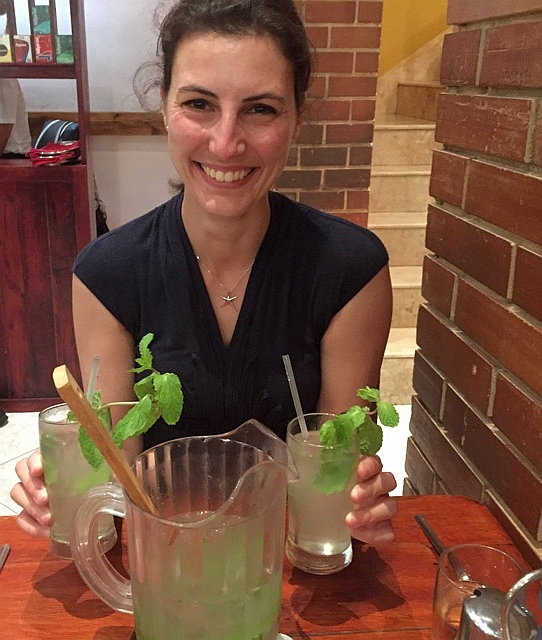 Who needs food when you can get a pitcher of mojitos for $7!

4) Utility outages.  Power was out in our apartment about 1/3 of the time…and this was in Havana’s ritziest neighborhood.  There were constant rolling blackouts that affected entire city blocks.  We also had no running water for one whole day.  Utility problems have become the norm for this once-great island nation.  It makes living there even more difficult. 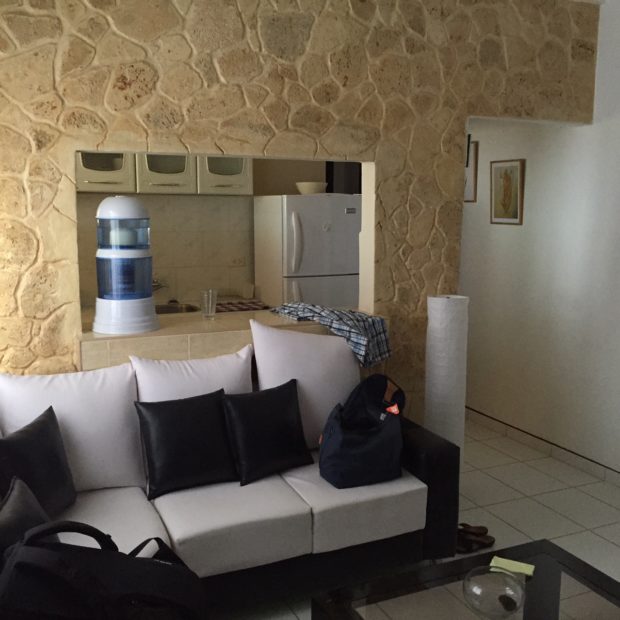 Our beautiful little apartment (for about $60 US a night). Too bad the government can only deliver electricity about half the day.

5) Internet.  It became legal for non-academic Cuban citizens to have access to the internet only a few years ago.  It still isn’t wide spread.  Very few homes have their own connections.  In order to get on the net, Cubans have to buy prepaid internet access cards.  The cards have a WiFi code.  The large hotels and government buildings have WiFi that can be accessed by using the codes.  Huge numbers of Cubans crowded the sidewalks in front of all the large hotels, using the WiFi to access the web on mobile devices. 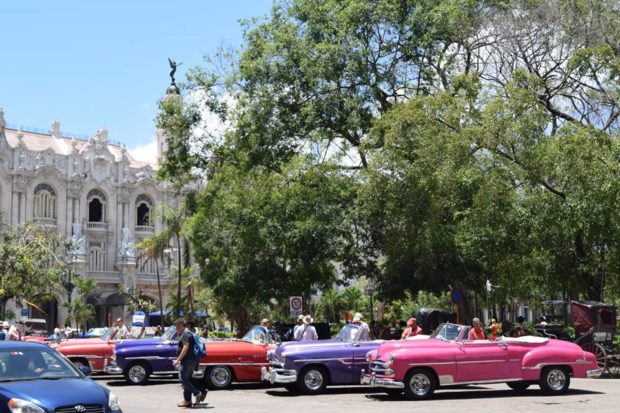 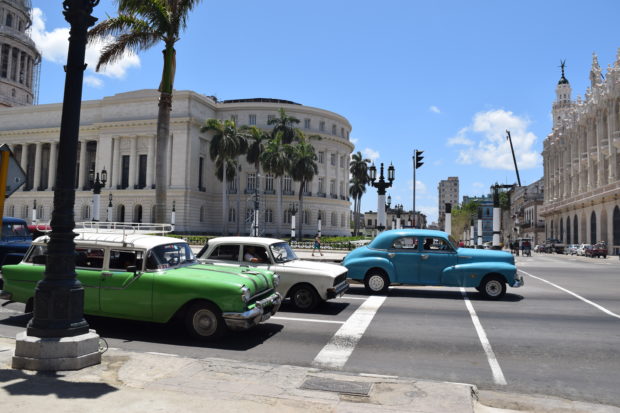 Some of the old cars on the street in Old Havana

7) The friendly people.  I expected some anti-American sentiment, but got absolutely none.  The people were all very friendly and amazingly helpful.  That was a pleasant surprise.  The only anti-American ideas we experienced were in the “Museum of the Revolution”, an ode to Fidel Castro’s wonderfully benevolent communist policies.  Lots of the descriptions of the museum items had a distinctly anti-American slant.  Fortunately for us, the official government opinion wasn’t embraced by the citizenry. 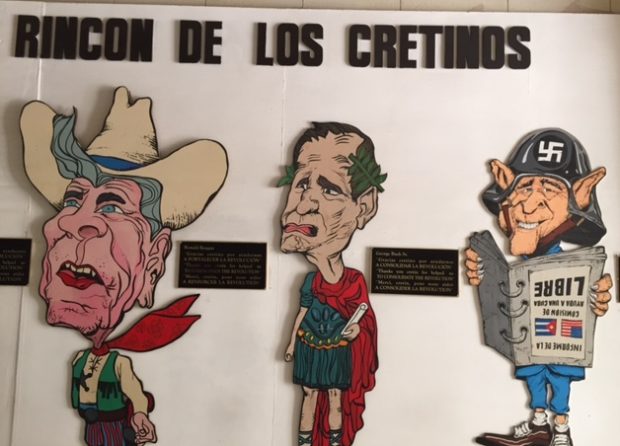 A painting in the Museum of the Revolution entitled “Corner of the Idiots.” 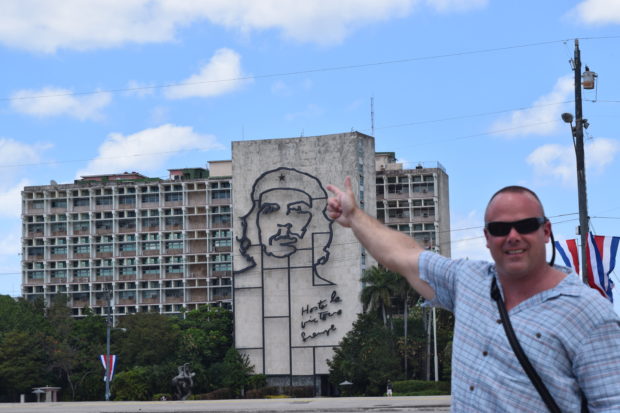 You don’t like our presidents, that’s fine (I don’t either). No matter how bad they have been, they still don’t even come close to the barbarity of Che.

Since most of you are reading my page for insights into self defense and firearms, I’ll mention a couple of more things that may be interesting to you….

We had absolutely no fear of crime while we were there.  No one was aggressive.  We didn’t see any drug addicts or violent drunk people.  Everyone smiled and was extremely mellow.  That isn’t common in many Latin American countries.  Another thing you don’t often see in Latin America is a police force that isn’t corrupt.  I spoke to several locals about the police.  The general consensus was that the police officers were often lazy (I might be too if I was making $30 a month), but they didn’t shake citizens down for bribe money.  Not a single person I talked to said anything bad about the national police.

The cops were extremely visible in all the tourist areas.  They carried full duty belts (nylon) like we do here (another rarity in Latin America).  They carried a pistol, two spare mags, handcuffs, pepper spray, and PR-24 batons.  Some of the cops were wearing empty holsters as if they didn’t have enough pistols to fully equip all the officers.

Most of the cops carried Beretta 92 automatics.  Occasionally I would spot an officer who wasn’t packing a Beretta.  Those guys were all carrying Soviet Makarovs!  I certainly didn’t expect that pistol to be carried down there.   It’s an odd choice for a police duty rig.

Not much else to report.  I’m glad we went and had the experience of seeing Cuba before it fully opens to American tourists.  Seeing the friendly local people practicing amazing resiliency in the face of brutal living conditions isn’t something we get to experience every day.  If you have dreams of traveling to Cuba, do your homework.  They don’t make it easy for tourists.  The difficulty is part of the appeal.  It’s cool to experience something new.  If you aren’t looking for a challenge, you can always take the family down to Disneyland instead. 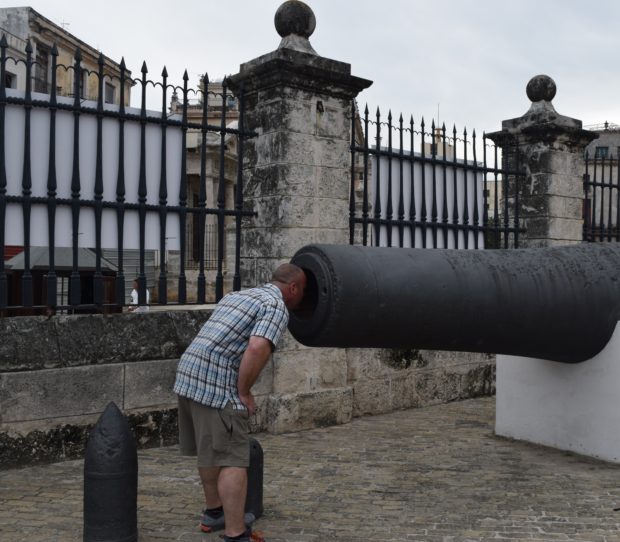 The only gun I got to play with on vacation. 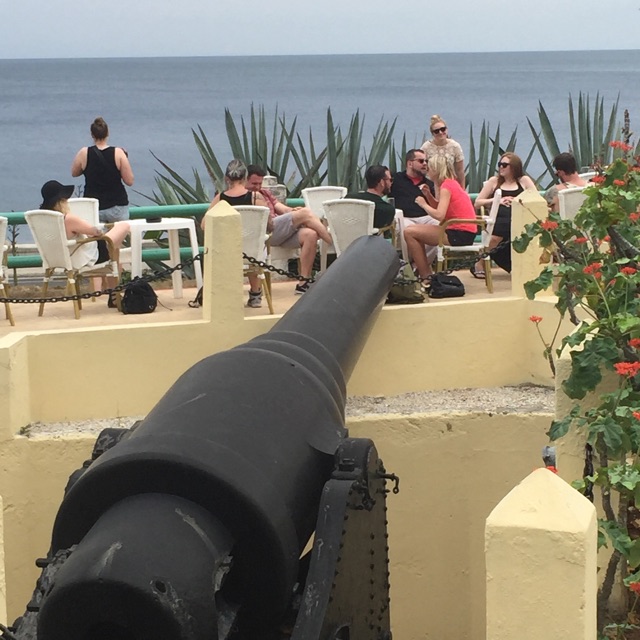 The Cubans like their canons. Probably wouldn’t be my first choice for a lunch table.