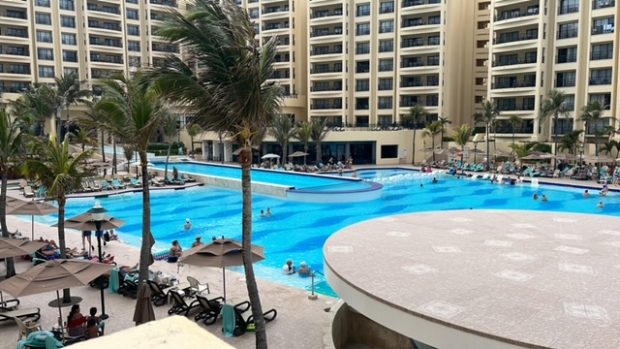 I apologize.  This article is a bit delayed.  With all the chaotic active killer events occurring recently, I decided to prioritize my content with that subject matter.  My travel experience articles had to be postponed.

I have some travel plans for this coming summer.  I’m worried that the long-Covid I’m still suffering might negatively affect my travel abilities.  I haven’t traveled internationally since I almost died from Covid in Ecuador last year.  Quite honestly, I’ve been avoiding international travel out of fears that I’ll have another near-death experience.   Since the Ecuador trip, most of my travel has been to various teaching venues across the country.  While I don’t have any significant problems teaching, the classes and associated travel stress absolutely exhaust me.  When I teach a two-three day class, I generally spend the following day almost bed-ridden with zero energy.

If a two day class does that to me, how could I take a two week trip out of the country?  I decided to do a trial run with a solo trip to Cancun last month.  I stayed six days at an all exclusive resort with the goal of minimizing stress and avoiding days of being stuck exhausted in bed.  I’m happy to say the trip was successful.  No exhaustion and no days in bed once I got home.  What follows  are the details from my Mexico trip in late April through early May this year.

I flew to Cancun on American Airlines.  I’ve been flying them more frequently since the pandemic began.  They seem to have better routes and fewer cancellations than my previous favorite, Delta.  As I wanted to treat myself for my first international trip in almost a year, I booked business class.  My flight down there had a connection in Dallas.

I was surprised when I went to board the plane from Dallas to Cancun.  American is doing a facial recognition boarding pass on that leg now.  I had never seen that before.  Instead of scanning our boarding passes, we stood in front of a computer screen as it scanned our facial features and identified us.

I wonder where American is getting the data for this facial recognition technology?  I had never submitted photos for them.  In any event, that seems to be the way of the future.  It worked fine and I walked onto the plane.

I was shocked to see that the business class had lay-flat seats within their own individual “pod.”  I’ve flown in these cabins before going on 8+ hour international flights, but I didn’t imagine they’d use them for a 90 minute flight to Cancun. 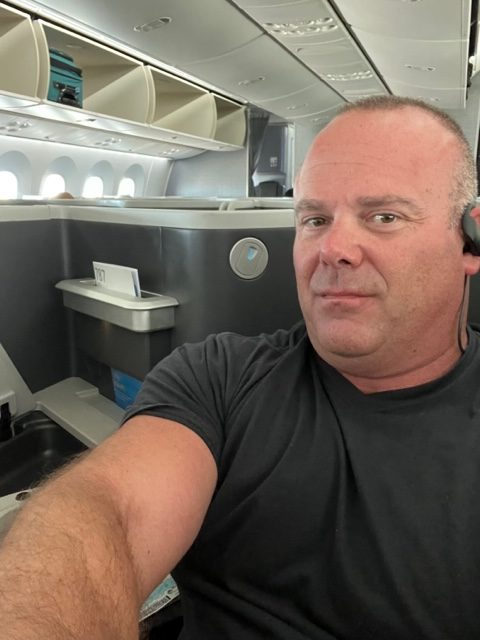 I was also surprised that American is now serving real meals now.  This lunch was a salad with shrimp, cheese, tomato, and street corn.  It was accompanied by some tasty orzo and a small cake.  Not bad. 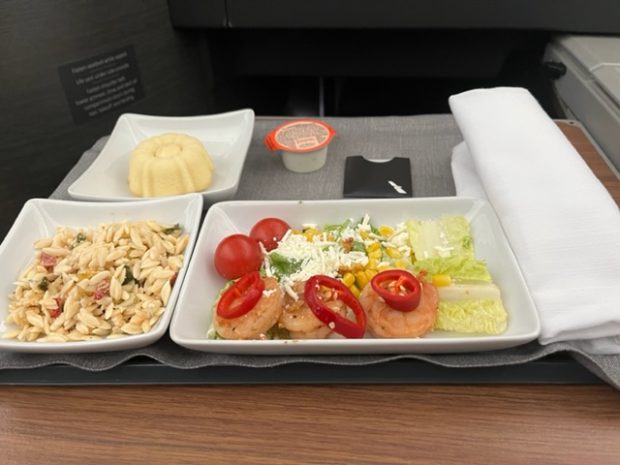 Real meals are back!

The flights arrived on time and I didn’t have any difficulty with my luggage.  The wait for immigration in the crowded Cancun airport was only about 10 minutes.  The government has done a lot of work to speed up this process over the years and I greatly appreciate it.

I got my bag, and walked out to meet USA Transfers, my favorite transport company at that airport.  I strongly urge you to pre-book your transportation before you arrive in Cancun so that you aren’t mobbed by taxi drivers and transportation company reps as you walk out of the airport.

Because this was a short notice trip, none of the hotels I usually frequent in Cancun had any available rooms.  Cancun is now one of the most popular worldwide tourist destinations.   When I was there last month, only 13% of area hotels had ANY available hotel rooms.  All the rest were fully booked.

I ended up staying at The Royal Sands All Inclusive Resort & Spa.  The resort got 4.5 stars on Orbitz.  It was OK.  Most certainly a step down in quality from the hotels I preferred, but adequate.  Unfortunately, because things were so busy, I had to pay five-star prices for a three-star hotel.

Please keep in mind, I often sleep in jungle hammocks and rent rooms that cost less than $20 a day in third world countries.  I’m used to roughing it.  This was not roughing it by any means, I just hate paying really expensive prices for an experience that is only adequate.

Here are a few pictures of the hotel.  It was on a quiet section of the beach near downtown (where I prefer to go out at night). 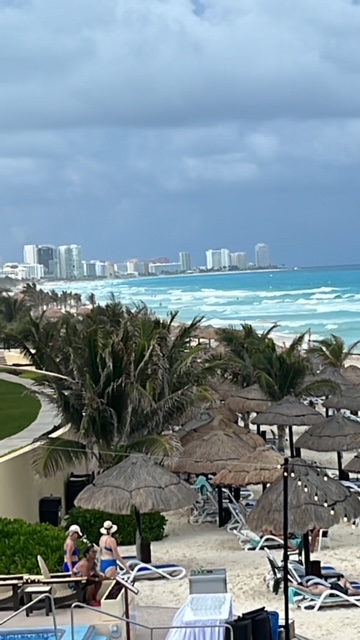 Looking north from my room 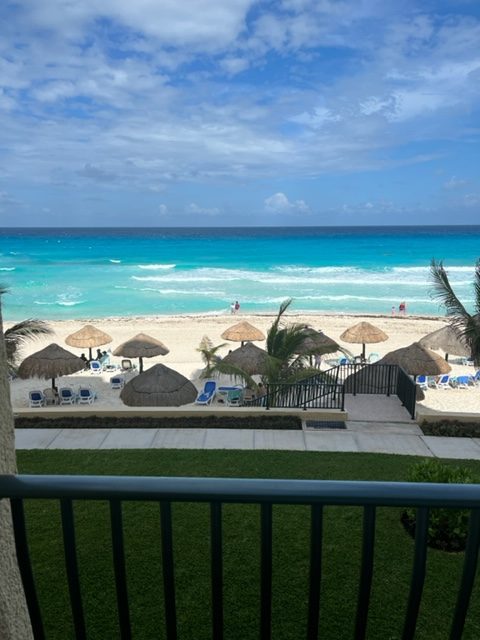 View from the room balcony

There was a long wait at the reception desk to check in.  The hotel (like most places) was severely understaffed since the pandemic.  The front desk clerk informed me that since the hotel was a “time share” hotel, everyone must check out on Friday.  I was staying until Saturday.  The clerk informed me that I would have to check out and get a new room for Friday night.  That was never noted when I booked the room.  What a pain in the ass.  I had to wait in line again and then move my stuff to literally the room right next to my previous room for my final night.

The clerk informed me that the battery in the card reader was likely dead and he would be sending a maintenance man up to the room to change it.  I trekked back to the room and waited 20 minutes for the dude to come change the battery.  Not a great hotel experience.  The staff didn’t seem to care.

I finally got into the room and found that one of the bed pillows had a blood stain on it.  Nice touch.  At that point I was too tired to care. 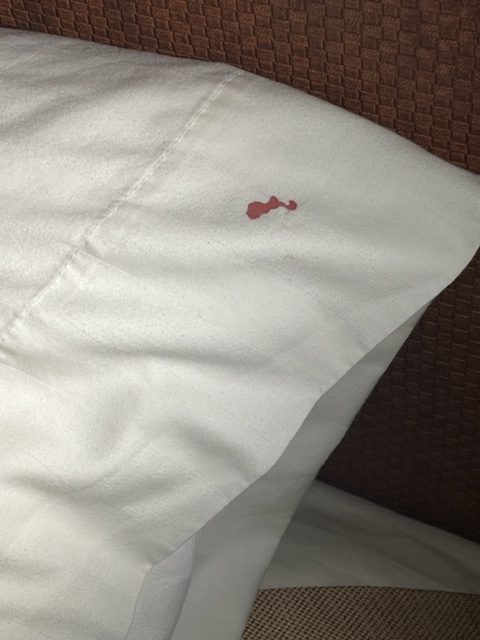 I had a relaxing stay.  The hotel had a great pool and workout facility.  I read and wrote and worked out.  It was uneventful and nice.  The only downside was that the gym required masks during the entire workout.  Another pain in the ass, but that was the law in Cancun at the time.  Now all mask restrictions are done.

For my last night, I decided to go into downtown and eat at one of my favorite Italian restaurants (Rolandi’s Pizzeria).  After eating nothing but Mexican food for a week, I was craving something else.  As I was staying in the Cancun hotel zone, I chose to ride the local chicken bus into downtown to get some good food.

The restaurant didn’t disappoint.  I’ve probably eaten there 10 times and always had a great meal.  I started with their beef carpaccio and then had a wood fired pizza.  Everything was excellent.  I highly recommend the spot for anyone who wants to leave the hotel zone. 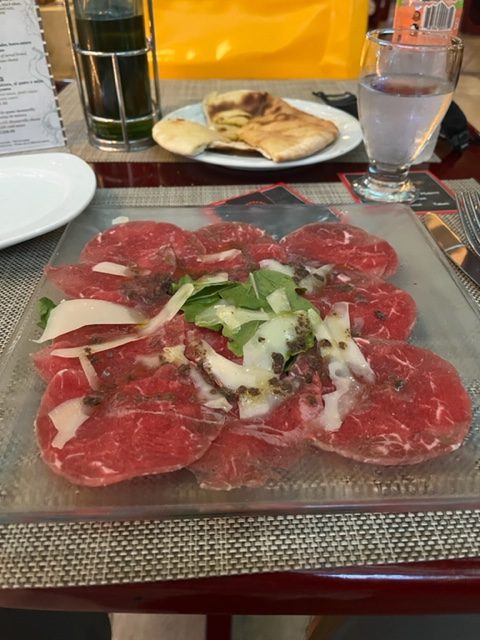 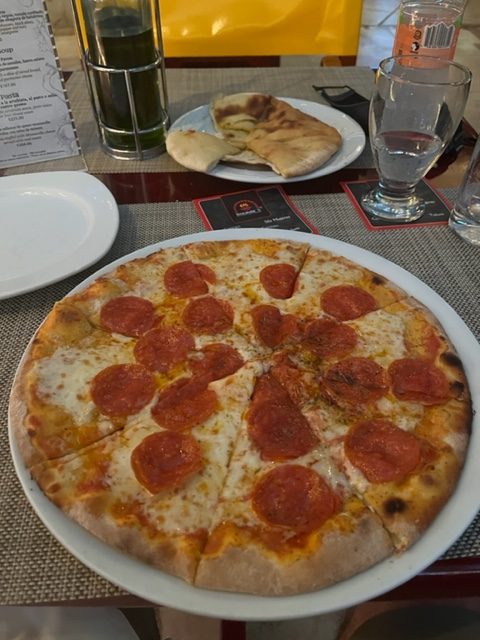 Better than pizza in Austin

I ate my meal and took a walk around the Parque de las Palapas, a local park that has food vendors, live music, and handicraft artists. It’s always a chill place on a Friday night. 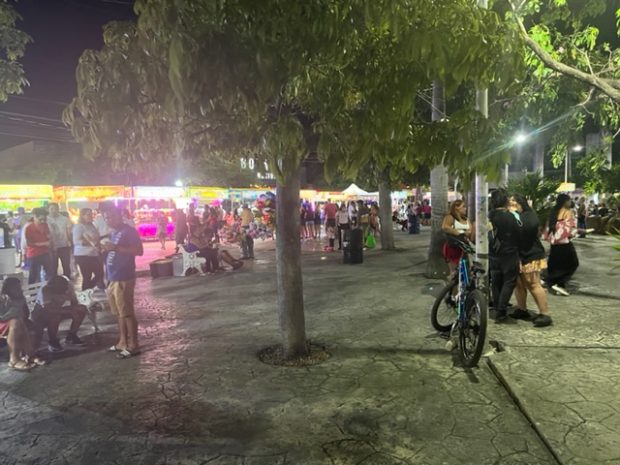 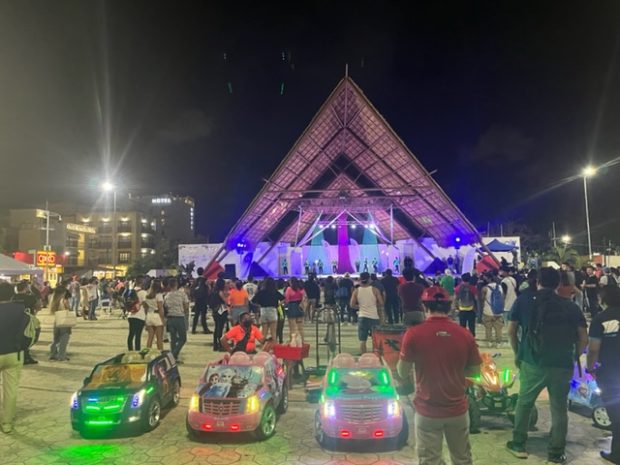 Parents rent these little electric cars for their kids to ride through the park as youth groups perform song and dance routines on the stage.

I’ve been to Mexico about 25 times over the years and lived down here for a couple months last year. I’ve never seen any kind of violence until this trip.

I picked up some gifts for friends and then headed out to the Main Street (Avenida Tulum) to catch the bus back to the hotel.

I noticed a dramatic uptick in number of homeless people on this trip as compared to when I last ventured into downtown Cancun about 18 months ago. Lots of beggars pushing shopping carts full of belongings now. In my previous visits, I never saw that.  The pandemic hit the tourist areas very hard.

As I was making my way to the bus stop, I heard a crash and a bunch of screaming behind me. I turned around and saw a shirtless homeless dude screaming at people. He had broken off a four-foot section of a wooden parking barrier and was swinging it at everyone walking on the sidewalk. He had a six-inch bladed kitchen knife in his other hand.

He was about 50 yards away and closing the distance swinging the wooden club at everyone on the sidewalk. He missed most of his shots, but hit a few of the slower people.  He kept the blade near his waistline and didn’t try to stab anyone.

I started thinking about my response options.  His movements were uncoordinated and he appeared to be really drunk or on drugs.  I was reasonably sure I could avoid his wild swings, and he didn’t seem to be doing much damage to the people he hit.

I had pepper spray and a folding knife, but wasn’t going to involve myself in that mess in a foreign country.   So long as no one was getting seriously hurt, my motto “Not my people. Not my problem” would be great guidance.

If he had started stabbing people I likely would have interfered.  I had my POM pepper spray with a range of about 10 feet.  The least I could do if he began using the knife would be to give him a face full of spicy treats.  I was reasonably certain I could do that without getting stabbed.

As the dude closed the distance without using the knife, I decided to get out of the area.  I  changed plans and flagged down a cab in the street. I hopped in and gave the cabbie the name of my hotel. He quickly left the scene saying “Que loco!” If a Mexican cab driver calls a situation crazy, you can bet it is truly crazy.

Problem averted. Back to the hotel and unlimited margaritas without interacting with the Mexican police. I’m calling it a win. Nothing about the attack made the local news in the following days. 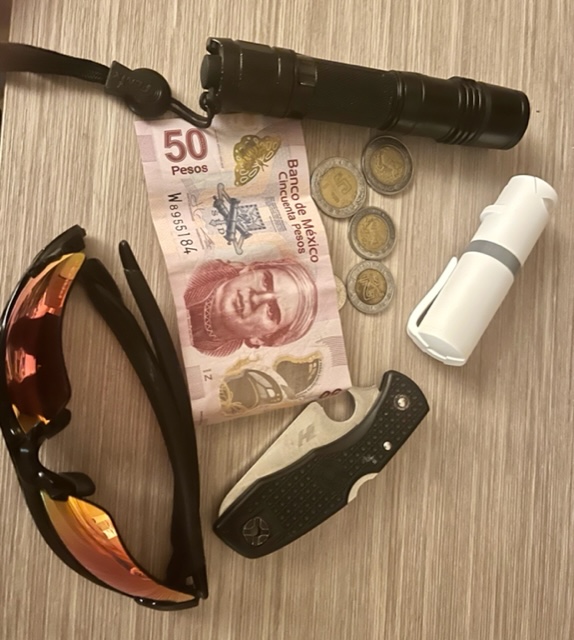 Everyday carry in Cancun. Glad I didn’t have to use some of this stuff.

On a side note, I recently replaced my ASP Street Defender with the POM Unit for everyday carry.  The ASP is great, but only sprays about three to four feet.  I wouldn’t have wanted to get that close to the crazy guy with the knife.  That situation gave me a greater appreciation of the POM’s more extended range, so I began carrying that one.  I’m happy with the change.

My flight home was a direct flight to Austin.  It ended up being two hours late (such is the reality of today’s air travel).  It was a more traditional plane and the business class didn’t have the lay-flat seats.  That first flight spoiled me.

I had never arrived in Austin from an international flight.  The process was smooth (thank you Global Entry), but the luggage took almost an hour to arrive on the carousel.  Apparently, that isn’t unusual for international flights.  One more facial recognition encounter and I was walking to the parking garage with my bag. 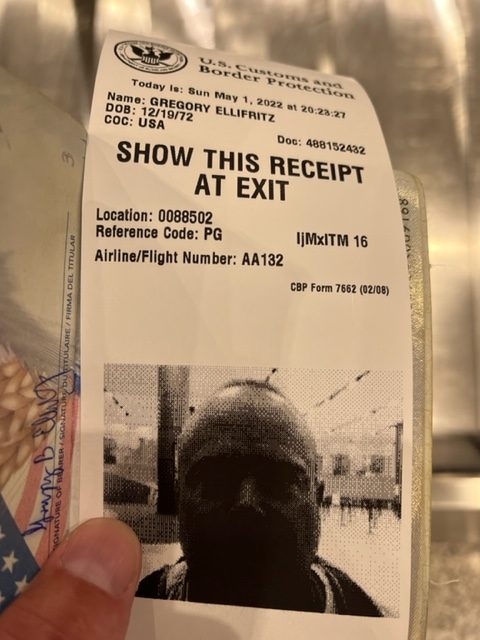 The feds were able to recognize me even with this blurry photograph.

I have a couple more vacations planned for the summer.  I’m heading back to Ohio for a few days to see friends and family in early July.  After that, I’m taking off to Medellin, Colombia for a couple weeks.  Then in early August, I’ll be visiting Yosemite and Sequoia National Parks.  I’m looking forward to traveling again.