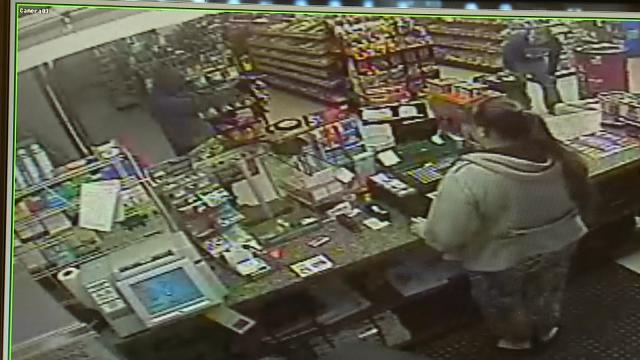 Read the story and take a look at the video below.  A convenience store customer named CJ Stout was chatting with a store clerk when a robber entered the store.  The robber pointed a gun at both the clerk and Mr. Stout before demanding money from the cash register and that Mr. Stout get down on the ground.

Mr. Stout started to comply, but then saw an opportunity and attempted to tackle the robber.  The robber shot him in the shoulder, pistol whipped him and then escaped the store with the stolen money.  Fortunately, Mr. Stout was not killed.

As I watched the video, I was struck by some comments that Dr. William Aprill makes in his”Unthinkable” class.  To paraphrase, William talked about how some people, regardless of circumstances or odds of success, will intervene in a violent crime.  The simply can’t stand by and watch as they see people victimized.  I think Mr. Stout might just be one of those people.  I imagine many of my readers would also fit into this category as well.

We all like to think that we make cool, rational, and informed decisions at all times.  The fact is that we don’t.  Some of us are hardwired to act in certain situations and no amount of danger or logical planning would stop us from doing so.

Place yourself in the position of Mr. Stout.  You are unarmed and confronted by an armed robber who is pointing a gun at you.  Would you have done the same thing Mr. Stout did?  I bet most of you, in your logical, rational mind, would evaluate the risks and rewards of such a counterattack and would say “no way.”  The problem is that in situations like that, we don’t often intellectually evaluate the situation and act with our logical mind.  We see an injustice and we simply act.

If you think you would never intervene in a robbery like this, think about a few other scenarios.  How would you act if the robber:

– Shot the clerk and then turned the gun on you?

– Started beating the female clerk with the pistol?

Would you act in any of those scenarios?

If not, imagine an even more heinous situation.  What if you were trapped in a shopping mall targeted by multiple terrorists who are shooting rifles and throwing grenades?  Would you act then?  How about if you saw an adult male beating a child or attempting to sexually abuse a little kid?  Would you act then?  How about if it was your kid and he was being snatched by a child abductor?  Would that force you to act, even if you were unarmed?

I bet that if we continued this exercise, I could create a scenario where most of my readers would act, even if the odds of success were non-existent.  Some of us would quickly intervene in the most dire scenarios.  Others might hesitate a bit or require a little more information before acting.  It doesn’t matter.  Most of us would intervene in one situation or another.

The problem really isn’t the intervention.  It’s the fact that people intervene without the right equipment, skills, or plans.  As my friend William says in his lecture: “If you are going to intervene, you better be able to punch your weight.”

Mr. Stout was ill-prepared for this scenario.  He couldn’t “punch his weight” and he lost the fight.  Now imagine if Mr. Stout was armed and skilled in the use of his pistol, would the situation have turned out differently?  Likely so.  What if he simply had the plan to make his counterattack at a situation when the robber was more distracted?  That might have worked out better as well.

It’s the people who “can’t punch their weight” who lose confrontations like these.  They don’t have the right mindset, the right skills, or the right equipment to solve the problem they are facing.  That’s a recipe for failure.

Take the time to think these things through.  Decide in advance if you would intervene in a situation like this or if you could stand by and allow the robbery to take place.  If you are the kind of person who couldn’t stop himself from intervening, learn to “punch your weight.”  Commit to always carrying a weapon, war-gaming scenarios in your mind, and improving your skill set.  If you don’t take the time to learn to punch your weight, you are likely to end up like Mr. Stout in the video above.  The outcome may even be worse.