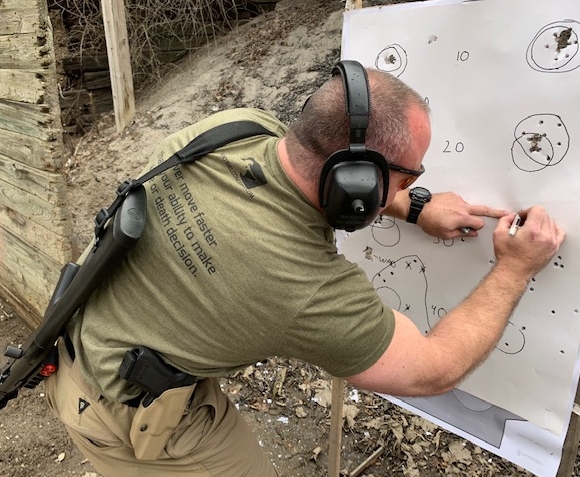 Although I’m not well known for it in the commercial arena, I really enjoy teaching shotgun classes.  In fact, the first firearms instructor school that I attended was a Benelli shotgun instructor school taught by Phil Singleton (of SAS and HK fame) way back in 1999.  I taught police shotgun classes quarterly from the years 2000-2013.  I also taught several of TDI’s shotgun classes during my early years teaching there.  Despite having all the cool carbines on the market, I still rely on a couple of shotguns for my primary home defense long guns.

What prompted this article was a long discussion I had with Tom Givens at the instructor dinner during the recent Rangemaster Tactical Conference.  Tom forced me to confront some facts that I actually knew well, but I  wasn’t considering in the right context.  His advice caused me to change my thinking about buckshot loads for home protection.

I’ve long been a proponent of very tightly patterning buckshot loads for police shotguns.  As soon as I became rangemaster, I changed our shotgun duty load from a standard 9-pellet Federal 00 Buck load, to the much more tighter patterning Hornady 8-pellet load.  At the time, the even tighter Federal Flight control buckshot hadn’t yet been invented.

For cop shotguns we want tight patterns for a few reasons.  The most obvious is that we don’t want to hit an innocent bystander with a stray pellet from a wide pattern.  Tighter patterns also extend the effective range of the shotgun.  With standard 00 buck loads, the pattern size starts opening up quickly beyond 30-40 feet.  Depending on the particular load and the shotgun’s choke, at somewhere between 20 and 30 yards, a few of the pellets will have spread wider than the chest of a silhouette target.  With the tighter patterning loads, the range is extended to 35-40 yards before pellets start missing the target.  That’s a big difference.

Because of the shorter ranges encountered in a home defense scenario, I’ve historically believed that a wider pattern spread would be beneficial because of the greater chance of hitting a moving target.  I don’t need a 40-yard capability in a shotgun when the longest shot I can physically take in my house is a measured 12 yards.  Why not open the pattern size up a little bit to increase the odds of getting a hit?

Tom convinced me that this thinking was erroneous.  He was, of course, correct.  Let’s talk about why a tighter pattern is better, even for short range home defense.

“Patterning” is the act of checking the group size at various ranges with your defensive loads.  I’ve fired hundreds of patterning shots over the years in all my classes so that I know the approximate size  of my groups at various ranges.  In our police issue Benelli M-1 shotguns with improved cylinder chokes, the Hornady 8-pellet load stays one hole out to 20 feet.  At 50 feet, all the pellets will stay in an area the size of a person’s head.  At 75 feet, the pellets easily stay in the chest area of a silhouette target.  At somewhere around 90 feet (30 yards) pellets start missing the chest of a silhouette.

These are good benchmarks to have committed to memory and I encourage you to do such patterning with your own defensive loads to better understand the pattern sizes that your shotgun will make.

When you start doing a lot of patterning shots, a couple things become obvious.  The first is that the guideline of shotgun pattern spread being “one inch per yard” of distance is absolutely incorrect.  That might work with some birdshot, but it doesn’t hold true with modern buckshot loads.  Patterns with defensive loads are much tighter than that.

The second thing that you will see with 12 gauge 9-pellet 00 buck loads, as ranges increase the chances for a “flyer” increase.  In the 9-pellet loads, the buckshot pellets bang into each other as they go down the barrel.  Inevitably, at least one of the pellets becomes slightly deformed and doesn’t fly the same as the rest of the round pellets.  Once you get out to somewhere around 40 feet, you’ll  see a fairly regular pattern with 8/9 of the pellets.  The 9th pellet will be separate from this group by several inches.  That’s why most of the specialty tight patterning 00 buck shot load only contain 8 pellets.  They eliminate “the flyer.”

Tom told me about three different shootings he investigated where an innocent bystander was hit by “the flyer” from a 00 buck load fired at a criminal.  A couple of those bystanders were killed by that single pellet.  Hmm…maybe having a tighter pattern is more important than I initially thought if innocents are also down range.

Tom then explained to me that the true advantage of the shotgun isn’t that it has a wide pattern spread to easier hit moving targets.  The advantage of the shotgun is in the sheer devastation those buckshot rounds create.  Shotgun wounds are far more impressive than most rifle or handgun wounds.  It’s rare that someone will need to be shot more than once or twice with buck shot.  We regularly see criminals and enemy soldiers soaking up half a dozen or more handgun or carbine rounds.

What I knew (but Tom had to re-explain to me) is that in close range fights, shotgun patterns don’t vary all that much between the widest patterning loads and the loads that shoot the tightest pattern.  At 15 feet, a tightly shooting buck shot pattern will be somewhere between one and two inches across.  The fastest spreading buckshot will create a pattern that measures two to three inches across.

After all my patterning drills, I knew this fact.  But it took Tom to explain it in context:

“Do you really think that one inch of extra pattern spread will increase your likelihood of getting a good hit?  No matter if you have a big pattern or a tight pattern, you’re still going to have to aim the shotgun precisely at close range to get the hit.  With the larger patterns, you don’t get any real advantage at very close ranges, but those big patterns are a huge disadvantage if you have to take a longer shot.”

To illustrate this issue, I did some patterning exercises to show you group sizes from two different buckshot loads at a few different ranges.  I used the shotgun that I own that shoots the absolute widest patterns to best illustrate the concept.  It is a 14″ barrel cylinder bore Benelli M-1 Super 90. 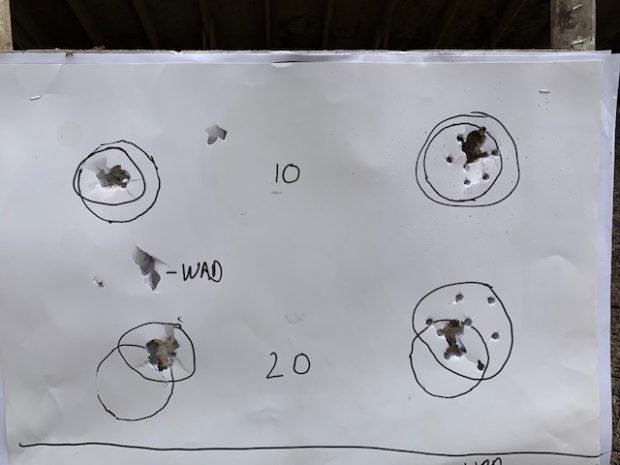 Hornady on left. Remington on right. Target circles are 3″ for scale.

Patterns are twice as big with the Remington loads.  But does it really matter when you are talking about a difference in pattern size from 1.5 inches to three inches?  The answer is “no.”

What about if we take the two loads out a little farther?

At 40 feet: Hornady= 8.5 inches  Remington = 9.0 inches plus one additional flyer off the target 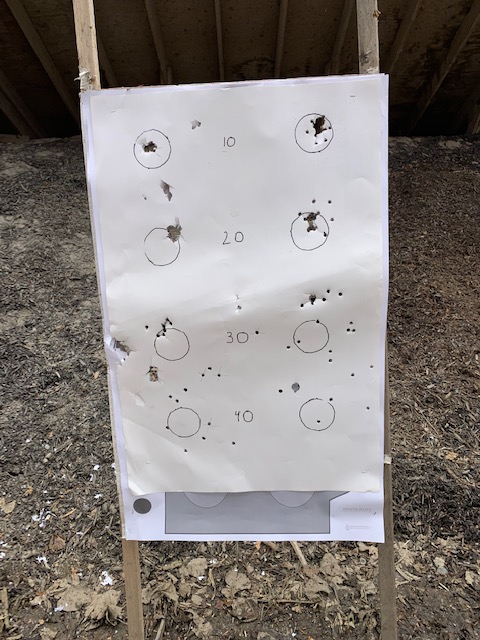 If you are counting bullet holes on the photo above, things won’t work out right.  I had a completely unexpected result when I shot the first 40′ Hornady load.  Only 4 of the 8 pellets hit the target.  Either the shell was improperly loaded or the pellets stayed in the wad.  I’ve never seen that happen in thousands of rounds fired of that particular load.  I marked the four and then fired an additional shot at the 40 foot target and got a more normal grouping.

I’ve been encouraging folks for years to load larger patterning buckshot loads in their home defense weapons.  That was bad advice.  I thank Tom Givens for setting me straight.

What load should you choose for home defense?  I don’t know.  You’ll have to pattern a few out of your own shotguns and find out what works best.  In general I would offer the following advice:

– If you choose 00 buck, pick an 8-pellet load instead of the 9-pellet load

– Stay away from the 3″ magnum loads.  The additional recoil is not worth putting a couple more pellets on target

– Stay away from the “low recoil” loads in a semi-auto shotgun.  You should avoid them in a pump as well, assuming you don’t have any infirmities that prohibit you from shooting normal velocity rounds.

Now, buy a few different loads and go out and pattern your shotguns!

Thanks to Tom Givens for setting me down a better path and to Bryan McKean for taking the photos of my test.