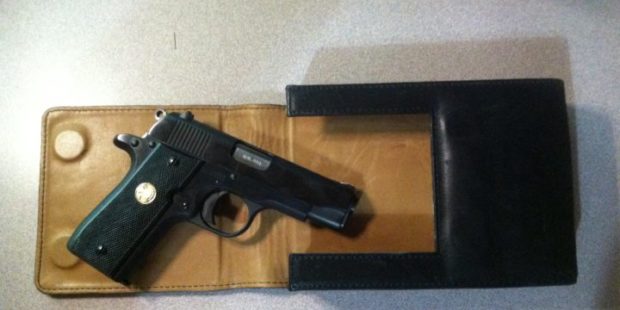 This installment takes a look at Brandon’s Colt Government MKIV .380 in a “Sneaky Pete” holster.  Let’s start with the gun….

The Colt Government Model .380 is a neat little pistol.  My father’s friend had one when I was a kid in the early 1980s and these guns were introduced.  He regularly let me shoot it.  I remember it being both accurate and reliable.

The problem is that this cute little blaster has been eclipsed by more potent and lighter pistols in the same size package.  The gun has a 3.5″ barrel, is all steel, and is chambered for the .380 auto cartridge.  I’ve written a lot about the .380 cartridge.  I think most people will have better results shooting a 9mm instead.  I have a couple of .380s.  They shine in extremely small packages that can be hidden anywhere.  I can see the justification for carrying a Ruger LCP in .380 because it fits in a back pocket.

I don’t see the point however, of carrying a .380 this big.  It’s the same size as a Glock 43 or Smith and Wesson Shield.  If you are going to carry a pistol in this size range, the 9mm is a demonstrably better performer.

Even worse is Brandon’s choice to carry chamber empty.  Take a look at the photo.  The hammer is down.  This pistol is a single action 1911-style weapon designed to be carried cocked with the safety on (cocked and locked).  Many novice shooters aren’t comfortable with this carry method and don’t believe it is safe.  They are wrong.  Carrying a gun with an empty chamber is problematic because it requires time to rack a round into the chamber.  It also requires two hands (yes, I know how to rack the slide with one hand.  Most of the folks carrying chamber empty do not).  In a gunfight, there isn’t any spare time to be had.  You may not be able to free up both hands to rack the slide.  One hand could be injured or “busy” doing something else.

Bottom line: if you don’t feel “safe” carrying with a loaded chamber, you don’t have enough education and confidence in your gun handling ability.  You need more training or a different carry gun.  Period.

As for the holster, I have to admit that I don’t have much experience with the “Sneaky Pete” holster.  It appears to be a well made leather pouch designed to look like a cell phone case or something similar.  The gun fits in the pouch, but does not have any straps or any additional means to hold the gun in place.  If the gun doesn’t fit perfectly, it can move around and create an inconsistent drawstroke.  That’s not conducive to superior performance.  A slow draw combined with chamber empty carry is a recipe for a gunfight loss.

I’m also a little worried about the retention of this little pouch.  It appears to be held closed with a couple magnets.  That doesn’t inspire confidence.  How well will the gun stay in the pouch when running, fighting, or rolling around on the ground when an assailant attacks you?  How easy is it to be ripped off the belt?  The cell phone case urban camouflage works well.  It occasionally works too well.  Smart phones are prime targets for street criminals.  Are you prepared to defend your little Colt when a thug decides he wants to rip your “phone” off your belt?  It’s something most people don’t consider.