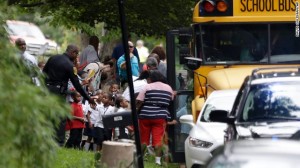 Did you hear about the school shooting in the Georgia elementary school two weeks ago?  It received a little news coverage, but then quickly faded from the headlines after people learned that no children were actually injured.

A mentally unstable man entered the elementary school carrying an AK-47 rifle, extra ammunition, and “several other weapons.”  He walked in to the office reception area and asked to speak to a police officer.  When he was told there wasn’t an officer at the school, he began firing bullets into the floor.

Police were called and he fired on them (without hitting anyone) when they arrived.  The school receptionist and police negotiators later talked him into surrendering.  No one was injured.  Read more about the event at the links below:

Police: Gunman wielded AK-47 inside Georgia school; no one injured 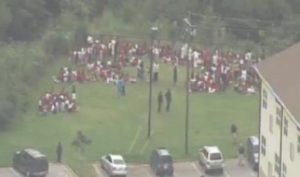 Even though no one was hurt, there are still several useful lessons we can learn from this shooting….

1) Don’t rely solely on passive security measures.  The doors to the school were locked.  News reports stated that the receptionist buzzed in a parent and the shooter followed the parent inside.  Locking school doors is a great start, but it can’t be the school’s only security mechanism.  It was easily defeated here.  It could be defeated even more easily if the shooter just waited outside and killed a staff member and took his/her keys.  The shooter could also take a child or staff member hostage and demand that the receptionist open the door.  Either technique would defeat the locked doors and provide the shooter with unrestricted access to the children inside.

And what about the parent who let the shooter follow him/her into the building?  What would you do if the man attempting to follow you into your child’s school was armed with a rifle?

2) Talking works…sometimes.  Too many people believe that they can convince a shooter to stop based on an emotional appeal or logical argument.  It seldom works.  Talking in an active killer event is best reserved for the absolute last alternative…when no other options exist.  Even then it is rarely successful.

In past incidents where it has worked, the shooter has already decided that he no longer wants to shoot anymore.  If the killer has stopped shooting and is wanting to talk, then by all means talk to him.  Otherwise, flee, lock down, or attack.

3) Explosives.  The cops had an difficult situation on their hands when they got to the school.  They were confronted by a crazed gunman who fired on them, but then quickly established communications and told them that he did not intend to shoot any children, parents or staff.  Additionally, the gunman left his vehicle parked directly outside the front doors of the school.

If the gunman didn’t want to shoot kids, why was he in the school?  The cops suspected that his shots were really just a ruse to funnel the children outside into the parking lot where he could blow them up with a car bomb.  While it turned out that wasn’t the case, it showed some quick thinking and adaptability from the police force.  They quickly got the children out of the school via a rear exit and moved them away from any possible sources of explosion.  They even cut a fence to provide even more standoff distance between the children and any potential bomb.

The trend among active killers worldwide is to combine gunfire with bombs.  The smart tactician will think about the possibility of one or more explosive devices at the scene of every active killer event.  If you want to learn more about explosive device preparations, read my article All About Bombs.

4) School Resource Officers.  This last point is for any of you cops who work in a school.  Most School Resource Officers (SROs) are chosen for their friendly natures and mentoring abilities rather than their tactical skills.  That really needs to change.  SROs are truly at the tip of the spear when it comes to protecting children from violence.

If you are an SRO, you need to be prepared.  This shooter likely wanted to kill a police officer to force a “suicide by cop” situation.  If you are an SRO, are you prepared to handle the threat of a man with an AK-47 in your school?  Do you carry your gun?  How about a backup weapon?  Do you wear body armor?  Do you have a rifle and hard plate body armor handy nearby?  All of these things are important.  If you don’t have a gun and body armor, you are useless in a fight against a man armed with a rifle.

I’m glad that no one was injured here.  It could have been far worse.  Kudos to the responding cops and the courageous receptionist.  Let’s learn from this event so that we can prevent future school shootings.