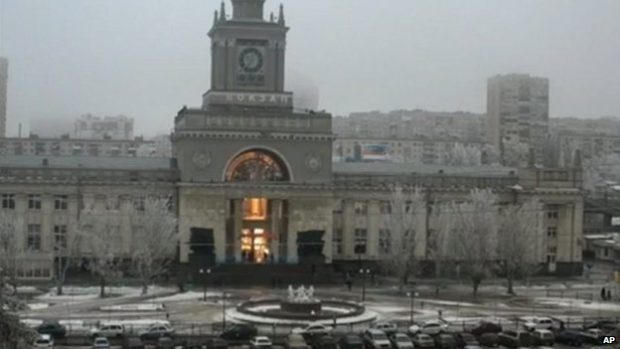 Earlier this week, the Russian city of Volgograd suffered two separate bombings, both linked to Islamist extremist groups.  The first bombing occurred in the city train station, killing at least 16 people and injuring 40 more.  Watch the video below from RT.com to see the effects of the blast from outside the station.

And then check out this video of the actual explosion inside the station just before the metal detectors:

The second bombing occurred the next morning on a city trolley bus.  14 people were killed in the bus bombing and at least 20 more were injured.  While this bomb blast wasn’t captured on video, the aftermath was.  Check out the footage from RT.com below:

The bombings are likely efforts to dissuade tourists from attending the upcoming winter Olympic Games that will be held nearby.  Russia is a vulnerable target right now.  Targets will change over time.  Don’t think that these incidents are irrelevant to you just because you don’t live in Russia.  Your hometown may be next on the list.  What can we learn from these bombings?

1) The bombs were relatively small and likely carried in backpacks or luggage.  The average suicide bomber payload worldwide has been in the 15-20 lb. range.  It’s the largest size bomb that can easily be concealed.

“The bomb used by the Volgograd suicide bomber was equivalent to at least 10 kg of TNT, the Investigative Committee said. The explosive core was covered with metal fragments to make the bomb more deadly.” (RT)

The second bomb was constructed identically, but was smaller.  It may have been pre-placed and detonated via remote control.

“Investigators calculated that the bomber, whom they said was a male, was carrying about nine pounds of explosives.” (Washington Post)

Pay attention.  Look around for abandoned luggage and get away if you notice anything suspicious.  Be extra vigilant when you see a person carrying backpacks or luggage in a location where such conduct isn’t “normal.”  Also look out for people carrying luggage that appears too heavy.

2) Suicide bombers tend to detonate when confronted.   This should make you think about how you might confront a bomber if you have the opportunity.  Would you give verbal commands or would you just shoot?

“One of the policemen, later identified by media as Dmitry Makovkin, spotted the suspicious woman and tried to prevent the terrorist attack, eyewitnesses said.

“At first, she hesitated at the turnstile,” a source within the investigation told Komsomolskaya Pravda newspaper. “Dmitry Makovkin approached her and at that movement she suddenly started to rush inside. Dmitry crossed her path and it seems he covered her with his body. That’s when she blew herself up.”

“It was a very powerful blast,” the source added. “Dmitry died instantly. Three of his colleagues were injured and are currently in hospital.” (RT)

In most suicide bombings the critical standoff distance is 15 meters.  If you are closer than that to the bomb, you will more likely be killed than live.  There will be a 100% mortality rate within five meters of the bomber when he blows himself up.  Get as much distance from the bomber as you can.  If you can see the bomb, you are too close!

3) There will be absolute chaos in the aftermath of any bombing incident.  Don’t expect immediate clear direction from cops and firemen on the scene.  Your best option is to escape (remember secondary devices) or to assist with the injured.  Get them to safety and treat their injuries.  In the train station bombing:

“… taxi drivers, who were waiting for clients right next to the railway station, were among the first responders to the disaster and helped with taking the victims to hospital. “If it were not for them, there would be more people dead,”

4) The train bomber likely had a “handler” as well.   The handler’s role is to protect the bomber in the event of intervention from the police or an armed citizen.  This complicates your response immeasurably.  If you choose to engage, you are likely to experience a counterattack from at least one of the bomber’s accomplices that you have not previously identified.  If you make the decision to engage a terrorist bomber, try to take a moment to scan the other people around.  Does the bomber seem to be with anyone?  Has he talked to anyone since you have seen him?  Is there anyone who seems to be paying too much attention to what’s going on?

“Investigators have found new evidence that the suicide bomber could have been a man whose name has not been identified yet. Interfax news agency reported that a male finger with a pin from a grenade was found at the scene.” (RT)

“We’ve discovered that the suicide bomber was in fact a man who brought the IED to the railway station in a rucksack. His identity has been determined.”

The source did not name the alleged attacker, but added investigators had found an unexploded hand-grenade and a pistol at the scene, which presumably belonged to the terrorist.

Yet another police source in the North Caucasus region told Interfax the railway station’s CCTV footage also showed a man who might have been behind the bombing. “Videos from the building’s cameras suggest that the terror attack was apparently carried out by a man, although this information needs to be confirmed.” (VOR)

My guess is that we will see more bombings like these two in the future.  It would be wise to prepare yourself and obtain some rudimentary knowledge about explosives.