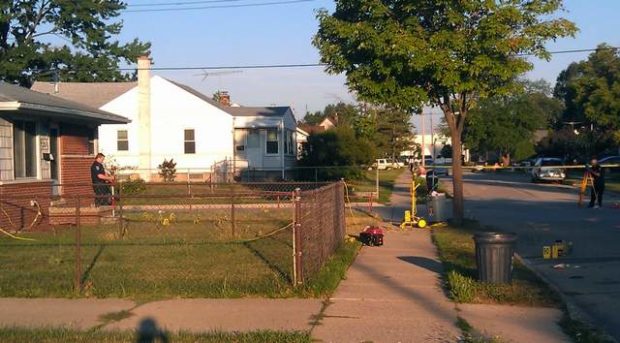 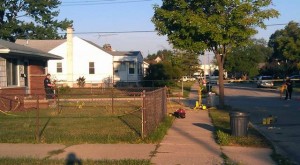 Shooting scene in the light of day. It looked a little different at night.

Most people don’t practice integrating flashlight tactics into their self defense training nearly enough.  It’s important to be able to use a flashlight correctly if you want to win a fight that occurs in the dark.  Improper flashlight use will get you shot very quickly.

For both armed citizens and cops, low light shooting training is just that SHOOTING training.  Officers and citizens are taught how to shoot while holding a flashlight.  While this is a critical skill to acquire, it isn’t the only important flashlight skill to have in your arsenal.  Knowing how to search with a light, flash and move, bouncing light, and team tactics blinding a suspect are all critical skills that most folks never master.

Take a look at this dashcam video of a police officer getting shot while approaching a house responding to a “man with a gun” call.  The officer was hit once in the torso with a .380 acp round (from a Ruger LCP).  The officer’s ballistic vest stopped the round from penetrating.

Fox 2 News Headlines
There are a couple of lessons to learn here….

First, it appears that he was shot because he was the only officer approaching the house with his flashlight on. Don’t do that!  You don’t need your flashlight in most urban areas at night. If you do need  it, use it in short unpredictable flashes and move immediately after turning it on and off.

Second, use the “momentary on” switch on your light! Don’t turn it on and leave it on. Notice that when he drops the light, it illuminates his position for potential followup shots. That’s bad. If he had been using the momentary on feature, the light would turn off if he dropped it.  If your flashlight has a “click switch” that doesn’t allow for a push button momentary flash, you need to get a new flashlight!  Save the one you bought at WalMart for when the power goes out in your house.  Don’t bet your life on it.

Most “tactical” flashlights on the market today are way too complex.  Having 14 different brightness settings and a strobe function is not necessary.  When I’m training cops and armed citizens, the students with multiple-position switches on their lights always end up with their light in the wrong mode when they try to use it under stress.  For a tactical light, you want on and off.  That’s all the primary switch should control.  If different modes are a necessity (and they aren’t) having the mode change performed with a different switch is critical.  A good example of separate switching is the light I carry on my police duty belt (the Fenix TK-15).  The on/off is controlled by a momentary “clicky” switch on the butt of the light.  Mode changes are performed with a different button on the barrel of the flashlight.  You can set the light to high output and it will stay there.  Using the momentary switch, you can turn it on and off quickly without changing light intensity or pattern.  If you need to dim the light in a non-tactical situation, you can do it with the alternate side button. 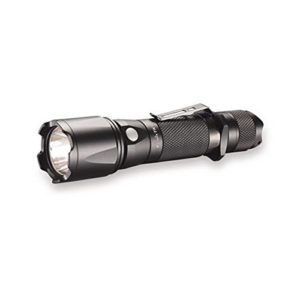 The Fenix TK-15. Silver button changes modes. On/Off switch is on the butt of the light.

Third, other officers placed the injured officer in danger by shining their flashlights on him to check his status. Bad move. It looked like there were plenty of cops there. Assign several to lay down cover fire if necessary while one physically runs over to the injured officer and drags/carries him to cover…without using a light! 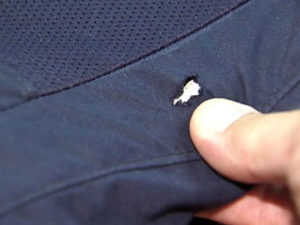 The bullet hole in the lower edge of the officer’s vest.

Good light discipline is important no matter if you are a cop or armed citizen.   This cop got lucky.  Let’s learn from his mistakes.  Practice smart!

One additional note:  The reporter in the linked story didn’t really know the price of soft body armor and stated that it could cost “several thousand” dollars.  That’s incorrect.  The average ballistic vest worn by a police officer will cost between $500 and $1000 depending on features.