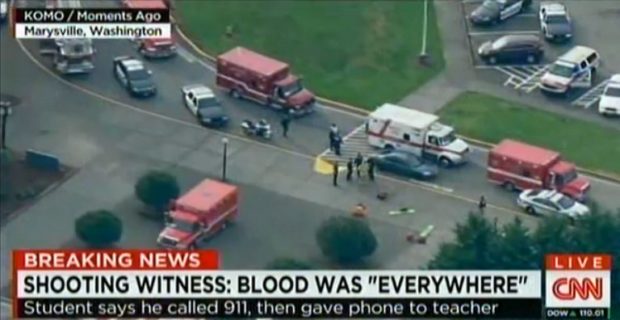 On Friday, October 24, a 14-year old Freshman student walked into his high school cafeteria and began shooting.  He picked a particular table (where his relatives sat) and shot five students, killing four, with a .40 Beretta handgun.  Reportedly, all of the victims had been shot in the head or face.

A first-year female school teacher was in the lunch room at the time of the incident and attempted to disarm the killer while he was reloading.  Her attempts were unsuccessful, but her actions likely prompted the student to shoot himself in the head, ending the attack.

The motive for the shooting is still unclear, although some sources are stating that the killer had recently broken up with his girlfriend.

While many details have not yet been released, here are a few learning points from this shooting:

The police will likely not arrive quickly enough to save you.  It is unknown exactly what time the killer here began shooting, but one student stated that the shooting lasted “about a minute.”  Soon thereafter the first 911 call was made from inside the school.  That was 10:39.  A police officer stationed at the school was first to arrive at the scene at 10:41.  Other officers arrived and joined the school resource officer, finding the killer’s body at 10:43.

A two minute response time is EXTREMELY fast.  Most police response times are considerably longer.  Even with the fast response, police were not able to intervene.  The shooter had already shot five people and then killed himself before their arrival.

It’s not a hopeless situation if you find yourself unarmed in the middle of a school shooting.  Did you know that more UNARMED citizens than police officers intervene in active killer events?  Oftentimes active killers flee or kill themselves as soon as they experience effective resistance in any form.  A 24-year old unarmed female teacher grabbed the killer’s arm during this shooting.  It’s unclear exactly what happened, but her actions either forced the student to shoot himself or contributed to his accidental shooting as they were fighting over the weapon.  If you regularly frequent areas where you can’t carry your firearm, having some unarmed fighting skills would be extremely beneficial.

Being able to recognize what the acts of reloading or clearing malfunctions look like is important.  The killer here reloaded his pistol at least once.  One student in the lunchroom initially dove to the ground when the shooting started, but got up to run and made his escape as the killer reloaded.  Some reports state that the teacher who intervened did so while the killer was reloading as well.

Learn (and teach your children) how empty guns differ in appearance from loaded ones.  If you notice the killer reloading or clearing a malfunction, use that opportunity to escape or attack.  It is one of the safest moments to do so.

Fire alarms can be both beneficial and hazardous.  Someone pulled a fire alarm during the shooting.  The alarm caused considerable chaos as students and teachers didn’t know if their was a gunman on the loose or if the school had planned a fire drill.  Once school officials figured out what was happening, they ordered students into lockdown.  That delay could have cost lives if the killer hadn’t already committed suicide.

Fire alarms gets students out of the building.  That is a good thing during most school shootings.  The downside is that when students hear a fire alarm, they think “fire drill” not “active killer.”  The casually walk out of the school without looking for signs of the killer or expecting to be fired upon.  The proper fire alarm evacuation routes may direct students right into the path of the gunman.

While escaping a school shooting is a beneficial strategy, the escape has to be planned.   Students should utilize cover as much as possible and should run as fast as they can.  They should also purposely choose an exit that moves them AWAY from the killer.  None of these things happen when the fire alarm is pulled.  Even if mass evacuation is the goal, avoid the impulse to trigger it via the fire alarm.  A better option would be to direct students to flee the building over the PA system instead.

Schools need to determine reunification locations in advance.  Many students will be calling parents to come get them during or after a school shooting.  The parents should NOT drive to the school.  All of the vehicles blocking the roads around the school will only delay the response of the emergency vehicles.  The school should pre-identify a location from which students can safely be released.  The location should be a public place with a large parking lot and ideally entrances and exits off of different roadways.  They used a church parking lot in this instance.

It’s unclear whether this location had been pr-identified or was delegated on the spur of the moment.  If you are a parent of a school student, ensure that your child’s school has a reunification location pre-identified and has a mechanism put into place to transport students there in the event of a crisis.  You would be surprised how many schools have not arranged for this to take place.

Teach your students what gunfire sounds like and how to react if they hear it.  In nearly every active killer event, victims mistake the gunfire they hear for some other, more innocuous, noise.  That delays efforts to escape or lock down.  In this shooting, one student stated:

The sound of someone kicking a door is very different from the sound of a .40 pistol being fired.  Students need to be exposed to gunfire and taught to act whenever they hear it in a public place.

It isn’t always the social misfits and bullying victims who become school shooters.  This is probably the most widely-believed myth that surrounds school shootings.  The killer here was a football player and wrestler.  He was popular, had many friends, and was recently named to the homecoming court.  Pay attention to ANY student you think might be having problems, not just the ones you think are likely to shoot up the school.