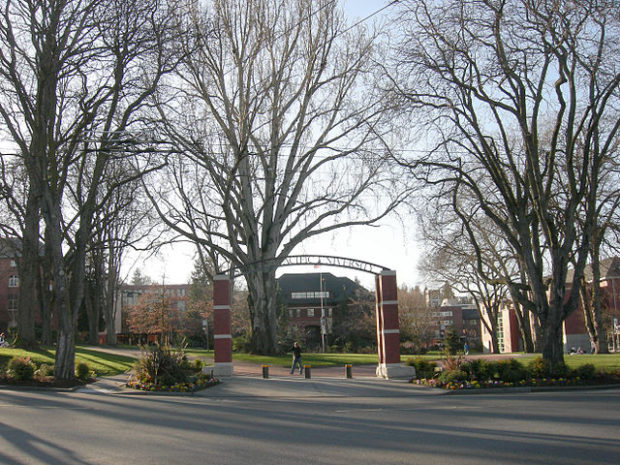 On Thursday June 5, 2014, a killer entered the library at Seattle Pacific University.   The mentally ill man had stopped taking all of his medications two weeks earlier because he “wanted to feel the hate.”

The killer brought a shotgun with him and shot four people, killing one, before he was subdued by students.  One other person was injured while attempting to disarm the gunman.  The killer was arrested by police shortly after being disabled by the students on the scene.  If you are interested in more information about the event check out THIS ARTICLE from CNN.

The story didn’t garner massive media attention because of the low body count.  The victims were generally ignored by the mainstream media.  The story the media chose to focus on was that of student Jon Meis, the student who initiated the attack on the gunman.  He deserves the praise.  He singlehandledly stopped what could have been a much deadlier attack.  I’m happy that his courageous actions were highlighted.  Even better, Jon is getting married this month.  Anonymous citizens found his wedding registry and paid for all of his wedding gifts.

Here are a few learning points from the shooting…

1) Use of less lethal weapons.  This is the first active shooter event that I have seen where the defender employed a less lethal weapon in attempts to disarm the killer.  It worked well here.  Jon Meis waited until the shooter was reloading and then sprayed him with pepper spray.  That distraction facilitated the shooter being distracted and disarmed.

Pepper spray is a bad choice of weapons against a person with a loaded gun.  But it proved to be just enough for the shooter who had an empty weapon.  Martial artists have taught for years that the best way to ensure a flawless joint lock or take down is to first stun your opponent with a hard punch to the head.  In this case, the pepper spray served the same role as a punch.  It was just enough distraction to enable Mr. Meis to tackle the assailant and wrestle his gun away.

There are many places (including schools and universities) where guns cannot be legally carried.  Pepper spray is a very good alternative in those situations.  Don’t expect instant complete incapacitation…nothing reliably does that.  But the spray may be disabling enough to facilitate escape or a disarm attempt.

2) Recognizing when the shooter was reloading.  This is a critical skill to have.  Most guns cannot be fired when they are empty and being loaded.  That provides the ideal time to stage a counter attack.   Do you know how to tell if a gun is empty?  Are you able to recognize a slide locked to the rear or the “click” a gun makes when the trigger is pulled on an empty chamber?  Do you know what physical actions shooters must take to reload their weapons?  If not, have one of your gun owner friends show you what this looks like.  It is the ideal opportunity to act.

3) Unarmed Citizen Intervention– Although risky, unarmed confrontation of mass killers is far from unusual.  My friend Ron Borsch has researched the active killer phenomenon for more than a decade.  In his database of Rapid Mass Murder ©  events (defined as “Four or more people being killed in less than 20 minutes in a public location”), he determined that killers were stopped by police or citizens in about half of all shooting incidents.  Of the events that were stopped:

Do not believe that there is no chance for survival if you are unarmed.  More than 25% of active shooter events are stopped by a single unarmed individual.  Wait for the proper moment (when the shooter is distracted or reloading) and act!  It’s far better to take the chance than to die cowering under a desk while the killer shoots you.

4) Long gun, lots of ammo, and secondary weapons.  The killer here had a shotgun, 50 extra rounds of ammunition and a knife.  He was prepared to kill far more people than he was able to.  If you intervene in an active killer event, expect that the shooter will have more weapons and ammunition.  Don’t relax if you’ve disarmed him of his primary weapon.  More than likely, he has at least one more.  Search him for additional weapons or restrain his hands so that he can’t access any backup weapons until the police arrive.

This obsession with other active killer events may be the most common pre-event warning sign that can be identified.  If you know someone who might is acting strangely and has a serious interest in mass shooting events, you should make sure that he gets the mental health counseling that he needs.  If you think he may become violent, report his conduct to police immediately.

6) Denial- Other students in the building initially rationalized the sounds of the gunshots as a “science experiment.”  This is common.  In other shootings, potential victims initially thought that the gunshots were fireworks or balloons popping.  Don’t take that chance.  If you are in a public place and you hear anything that may possibly be gunshots, don’t rationalize the sounds as something less ominous.  Assume they are shots being fired and exit the building in the direction opposite the sounds.  If it is truly just balloons, you may be embarrassed.  Being embarrassed is far better than being dead.

I applaud Jon Meis for his courageous actions.  If others in similar situations acted as bravely as he did, the number of deaths caused by public mass murders would be far less.