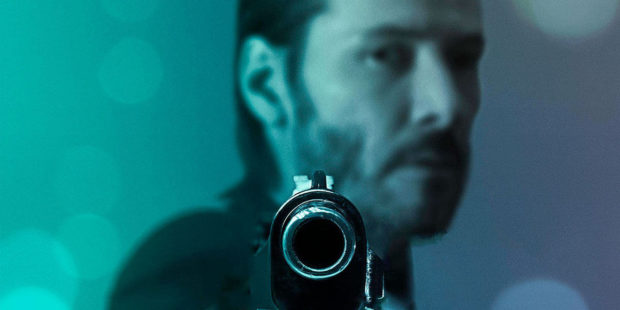 I like going to the movies.  In the last few weeks, I’ve gone to the theater a couple times.  I’m thinking that I can write off my tickets for John Wick 2 as a tax deductible training expense.

In any event, my recent forays to the theater got me thinking about security issues.  The movie theater is truly a unique environment with regards to physical security.  First of all, it’s dark.  Really dark.  Probably one of the darkest public environments you can visit.  Trainers often talk about attacks commonly happening in hours of darkness, but that’s somewhat misleading.  Criminals need some light to detect their prey.  These attacks tend to happen on streets and in parking lots at night.  In most of those places, there is actually a good bit of light.  In a movie theater?  Not so much.

The other aspect that is somewhat unique in a movie theater is the extremely wide threat field.  In many public locations, you can limit the area from which an attack can be launched by sitting with your back against a wall.  Not possible in a movie theater.  The threats can appear from a 360 degree circle.  Even if you sit in the extreme rear of the theater or far on one side, there is still an aisle between you and the wall.  You still have to pay attention to all directions when scanning for potential threats.

The size of the theater and the seating arrangements also lead to unique concerns.  Most defensive shootings occur in the 15-25 foot range.  In a big theater, a 50 yard shot may be necessary.  The seating aisles also make it difficult to move decisively or make an escape quickly, especially when a theater full of people become panicked.  In addition to all those factors, there is also zero cover available in most theaters.

A movie theater isn’t a high risk target in most environments.  You are probably in more danger driving to the theater or in the parking lot than in the theater itself.  With that said, if a terrorist or active killer does attack the theater you are attending, your response options will be severely hampered by the environment.  A little pre-planning can mitigate some of those risks.  Here’s a list of things I do to make my film viewing experience a little safer.

There are those who will advocate taking a middle seat because the shooter is likely to target people along the aisles first.  That may be a good point, but I prefer better mobility to the ballistic protection offered by others’ bodies.  Remember, the emergency you face may not be a shooter, but something else (bomb, fire, gang fight, etc).  I think the aisle offers a better overall position.    An aisle seat in the far rear of the theater might be the absolute best place to be.

3) Carry the right equipment.  One thing I never leave home without is a powerful flashlight (I generally carry two).  Whether it’s used to temporarily blind the shooter, find an escape route, or to line up your sights, a flashlight would be incredibly useful in a movie theater shooting.  I carry the Fenix PD35.

If you can lawfully carry a gun, think about your weapon choice.  What gun would you choose if you knew you might have to fight a shooter  in a dark, possibly smoke-filled theater with dozens of panicked people running around?  For me, a .38 snub or .380 auto would be at the bottom of the list.  Carry enough gun to do the job.  Movie theaters are large.  You’ll want a gun with which you can easily hit a target 25 or more meters away.  Most pocket pistols aren’t very useful for making precision shots at long range in the dark.

My current movie theater gun of choice?  It’s my police duty weapon, a Glock 17 equipped with a Surefire X-300U light with the DG switch.  It’s accurate, reliable, and carries a whole bunch of bullets.  Even more importantly, the weapon mounted light allows me to instantly engage threats in a pitch black environment.

The Glock 17 with a tactical light isn’t the easiest package to conceal.  I could carry in an outside the waistband belt holster, but then I’d need to keep a jacket on for optimal concealment.  I prefer to carry in the appendix position under an untucked shirt.  Out of all the holsters I’ve tried, the only one I’ve found to be comfortable with this pistol in the appendix position is the Bawidamann “Gotham” holster. 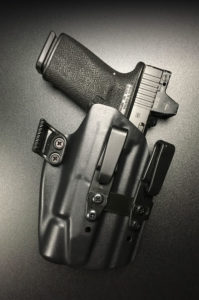 The Gotham holster is incredibly comfortable, despite carrying a large gun with weapon mounted light in appendix position.  It conceals amazingly well also.  Retention is excellent and balanced with a rapid draw speed.

My only complaint about the holster is that the “snap in” retention requires a rather vigorous push to completely reholster the weapon.  I’m hesitant to do that while carrying in the appendix position.  The resistance of the gun snapping into place is indistinguishable (at least to me) from the resistance one might feel if a piece of clothing was caught in the holster mouth when reholstering.  I never want to “push through” that feeling of resistance.

It’s an easy fix with a heat gun.  I just remolded the “bump” on the inside of the holster to reduce the resistance I feel when reholstering.  This five minute modification makes the holster a whole lot safer for my paranoid nether regions.

Andrew makes some outstanding holsters.  He’s truly innovating in the field of appendix carrying guns with weapon mounted lights.  Check out his stuff at Bawidamann Holsters.

4) Consider a backup gun.  I usually carry a backup gun to the movies, because I always go to the theater with my significant other.  She is trained and has a CCW license, but many movie theaters in our area are “gun free” zones.  She can’t legally carry, but as a cop, I can.  I carry a spare pistol so that I can arm her in case of an emergency.

It gives me instant backup and allows me to leave her without worry once we get outside and in a relatively safe position.  Depending on the situation, I may choose to return and go hunting or help the injured.  It’s good to be able to do that without worrying about her safety.  My usual backup gun when I’m with my girlfriend is my Glock 42.  It’s her primary carry gun, so she’s comfortable using it.  It also conceals well and is one of the most accurate pocket pistols on the market.

If you are going to the theater with unarmed (but trained) companions, consider carrying an extra gun so that you can arm one of them in an emergency.

5) Medical Gear.  If you are planning for a gunfight, you should also plan on having the ability to treat any gunshot wounds you or a companion might receive.  I carry the Ricci ankle medical kit filled with a mini-compression bandage, CAT tourniquet, chest seal, and hemostatic gauze.  For more information on this rig and links to all the supplies it’s filled with, check out the article I wrote about alternate ways to carry medical gear.

Remember the Aurora, Colorado Batman movie shooting?  In that attack, 70 theater patrons were shot.  Because of concerns about a second shooter, cops wouldn’t allow medics to enter the theater to treat the wounded.  It took 26 minutes for medical teams to get inside to treat the injured.  You better have the gear you need to keep yourself alive awhile if you get shot in a movie theater active killer attack.  Trusting an overwhelmed EMS system is a bad plan.

6) Think about what else you will need to escape.  Good footwear comes to mind immediately.  I don’t go out in public anywhere I may have to run while wearing flip-flops.  Wear some real shoes!

Also think about where you park your car. I prefer to park a little bit farther away from the theater (nose out) so that I can make an escape if necessary without being blocked inside the perimeter created by responding emergency vehicles and crime scene tape.

7) Training is important.  Think about this scenario again.  It’s dark and smoky.  You have dozens of innocent people running around.  A man is firing at you with a semi-automatic rifle.   Could you actually hit the target with your chosen CCW gun?  That’s a tough shot to make.  Don’t delude yourself thinking that your military experience from 30 years ago or the 8-hour CCW class you took gives you the skills to do it.  It’s never been easier to get quality professional firearms training.  If you are serious about protecting yourself and your loved ones, it would be in your best interest to find a good instructor or shooting school and take some classes.

Think about these tips before your next trip to the movie theater.  Remember to silence your phone and enjoy the show. 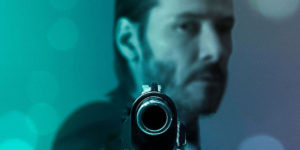