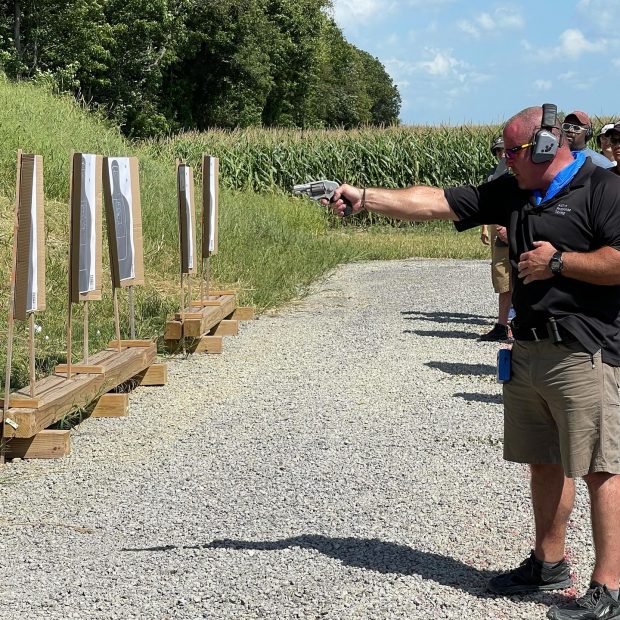 Last weekend I taught shotgun and revolver classes at the excellent Condition Red Response facility in Fort Wayne, Indiana.  If anyone is in the nearby area, taking a class from these folks is a great idea.  Quite a few of the CRR instructors took both classes on their own time.  It’s a quality organization with good people teaching high quality classes. 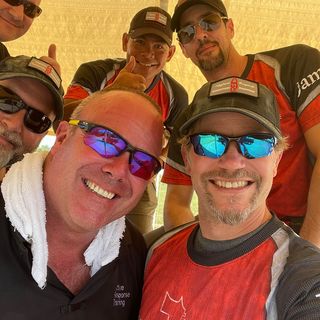 With some of the CRR crew after class

Both classes were completely full with 20 students each.  I was honored to have such an exceptional turnout for my first classes post-Covid-19 hospital stay.  It was less than two weeks since I left the hospital when I taught the classes.  I didn’t have the strength and stamina to teach the way I usually teach.  I’m thankful for my students’ understanding that I was not 100% and willing to accept my somewhat diminished capacity.

If any of you are interested in a review of the shotgun class, see the CRR Facebook page.  Kjell’s review of the revolver class is HERE.

If I wanted to write in depth about all the issues I saw in both classes, it would be a 10,000 word article that no one would actually read.  Instead, I  will summarize some of the issues I saw in a highlighted “Cliff-Notes” format rather than developing each idea over multiple paragraphs.  If you need more details, come to a class.  I have plenty of available classes and will be teaching regularly all over the nation next year.
Here are my thoughts on the weekend’s training, focusing on guns, gear, and tactical issues I identified with my students.  I didn’t take notes.  This is just from memory.  I might have the gun numbers slightly wrong and probably forgot one or two, but the estimates are very close.
Tactical Shotgun Course
The guns:  About half the class had Beretta 1301s.  A lot of those were the Langdon or Tactical models.  We had a couple of 870s, a Rock Island Arsenal semi auto, a few Benellis, a Winchester SXP, two Mossberg pumps, and a CZ pump. 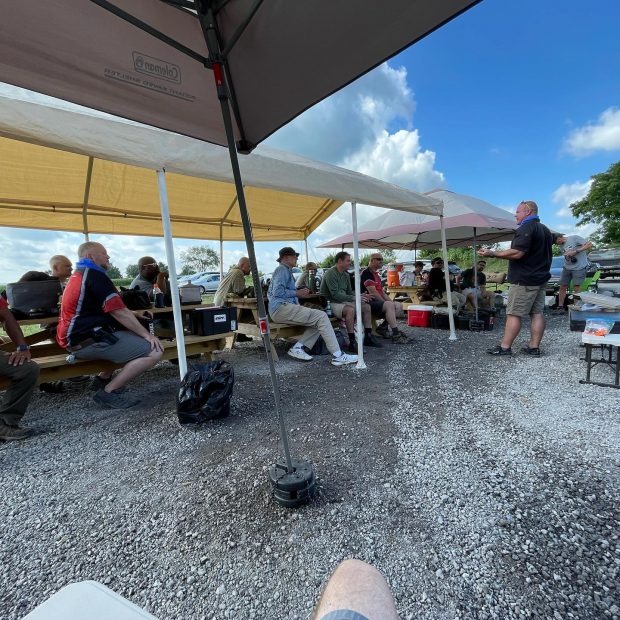 Gun performance– We had relatively few issues.  All the 1301s and Benellis ran fine.  Any malfunctions I saw with them were from poor lubrication or bad ammo.  I saw one malfunction out of the Rock Island semi-auto, but it did great other than that.  The 870s ran perfectly.  One of the Mossbergs had a problem not feeding shells onto the carrier from the magazine and had to be replaced with a backup shotgun.
In all my courses Mossberg 590s perform much more consistently than their model 500 brothers.
The Winchester performed admirably, with no issues.  The CZ pump came installed with a shell limiting plug.  Even with the help of YouTube, we were unable to remove the plug and the student ended up using another shotgun to finish the course.
Other Issues:  I saw a couple of the Velcro mounted sidesaddle ammo cards fall off during use.  Other than the Aridus version, I’m not a big fan of Velcro shotgun cards for spare ammo.
Bead sights are consistently harder to use than ghost rings or rifle sights.  They also tend to shoot high.  The two bead sighted shotguns in class put rounds in the neck area when the operator was aiming at the chest at 15 feet.  If you have a bead sight, you may have to bury up to half the bead into the receiver or ventilated rib when shooting.  PATTERN YOUR SHOTGUN!
We had one Aimpoint optic and a couple Holosuns.  All performed fine for the 150 round class.  No issues at all with optics. 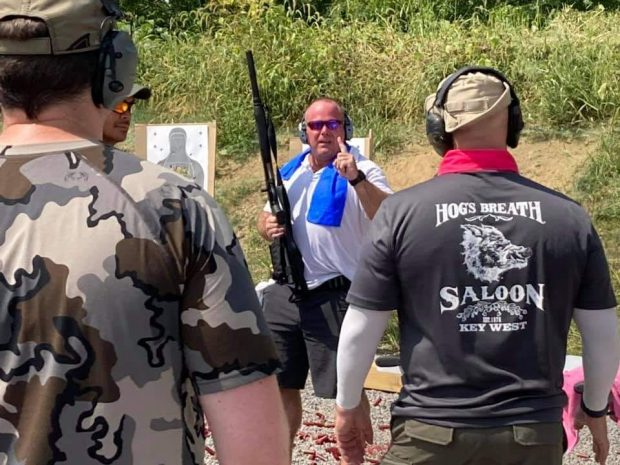 “You only need one round of 00 buck to the chest to stop your opponent.”

Other Issues:  The biggest problem I saw was people short stroking the pump guns.  We had one gun with a fired shell stuck in the chamber and the student was unable to pump the gun.  That happens at least once in every shotgun class I teach.  It gave me the ability to teach an impromptu class on how to “mortar” a shotgun.  Very few students knew about mortaring.  Look it up online or come take a class if you don’t know how to mortar a shotgun (or AR-15).  It’s a life saving skill to learn.

Snubby Revolver for Concealed Carry Class
The guns:  It seems like close to half the class had the perfect CCW snub, the S&W 442/642.  We also had a Ruger SP-101, a Taurus 856 (I think), a couple Ruger LCRs, a couple S&W performance center snubs of various configurations, and a S&W 640.  There were a few other steel frame Smith snubbies as well.  I had a few students who didn’t have snub nose revolvers. but still wanted into the class to learn basic revolver skills.  I let them in anyway.  One was shooting a Smith 19 with a 6″ barrel.  Another was shooting a 4″ 686 Performance Center model. 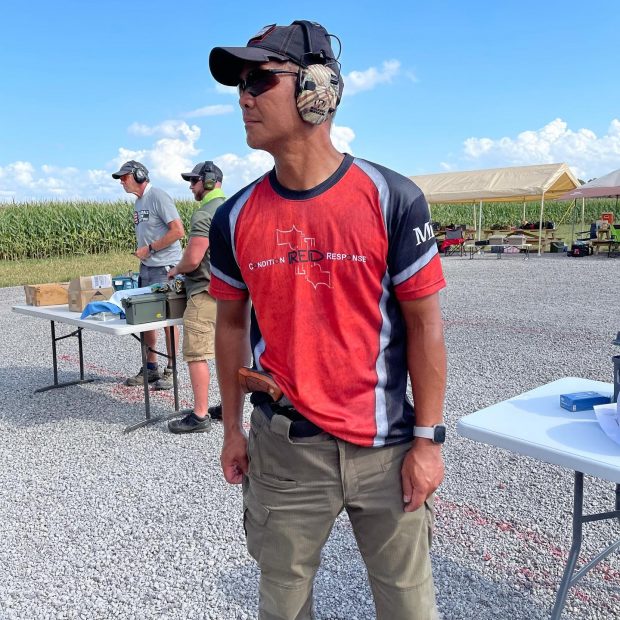 Surprisingly, the Taurus ran without a hiccup. 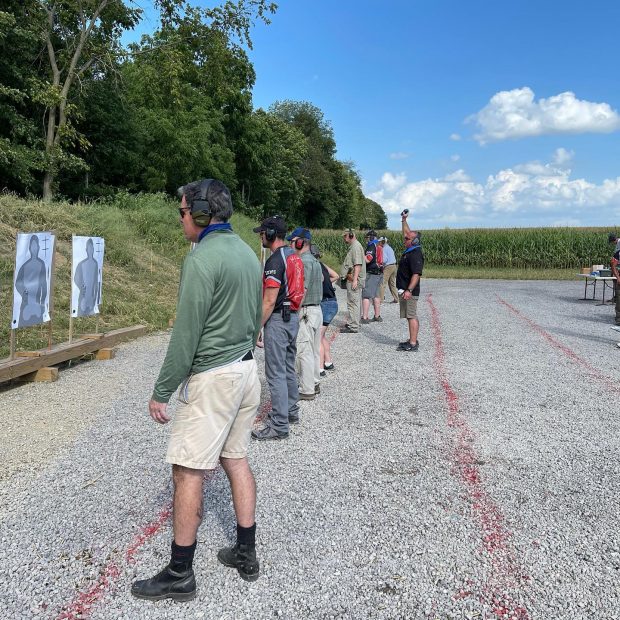 Other Issues: Squib loads happen with revolver ammunition far more frequently than with autopistols in my experience.  That’s why in every class I have students shoot a primed cartridge case without powder or projectile during the first drill of the day.  I try to show them what a squib feels and sounds like so that they know to stop shooting and investigate a suspiciously under powered load.

That drill paid off in Sunday’s class.  A student had a squib in his 442 and stopped firing.  Sure enough, the bullet was stuck in the barrel.  I had my trusty Monadnock de-Jammer and tried to push the bullet out.  No luck.  The bullet was stuck so badly in the barrel that the students spent more than 30 minutes trying to pound it out with my de-jammer and a heavy hammer.  When the De-Jammer bent, the student moved on to using a steel tent stake to finish the job.

The bullet came out.  Unfortunately, the student slightly bent the gun at the barrel/frame interface from all his pounding.  The cylinder wouldn’t close any more.  It’s going back to the factory for repair.  The student was using reloads.  My guess is that the bullet was significantly oversized. 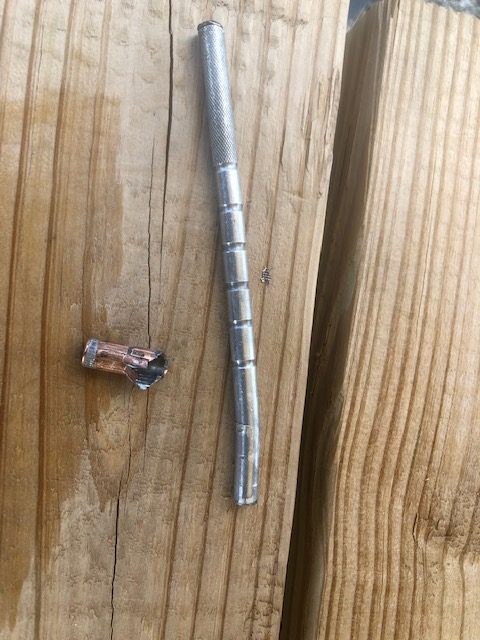 Bullet (once a round nose FMJ) and bent De-jammer

Since I had to hand out two of my guns as loaners, I used my unicorn S&W 242 for demonstrations.  I love the gun, but hate reloading with HKS speedloaders with that particular gun.  I’ve had good luck with the HKS loaders in other guns on past  occasions.  Although slower than the Safariland Comp III versions or the Jetloader, the HKS has proven reliable over the years.

Shooting the 242 for demonstrations

For some reason, the HKS loaders just don’t like the set up of the 242’s seven-shot cylinder.  It was difficult to line up the cartridges and turn the knob without losing a round or two with the HKS loaders.

When I found that SpeedBeez was making a seven-shot .38 loader, I bought a couple.  I also bought their double speedloader pouch for them.  I used them all day in class.  The speedloaders worked phenomenally.  Much faster than the HKS.  However, I hate their double loader carrier.  During class, my normal motion or walking, running, and teaching caused the speedloaders to dislodge all of their cartridges into the carrier on three different instances between both loaders.

I never had that problem with the single loader carrier.  I won’t be carrying the double SpeedBeez carrier anymore.

One other problem with reloading devices that I saw was that a single Zeta Six speed strip was out of spec.  A student was trying to load two rounds from the strip into his K-frame snub.  The rounds were spaced too far apart on the strip and it was impossible to load two rounds at a time with the loader.  None of the other students using the brand had any troubles.  I think my student might have found one that was released into the wild with a bad batch. 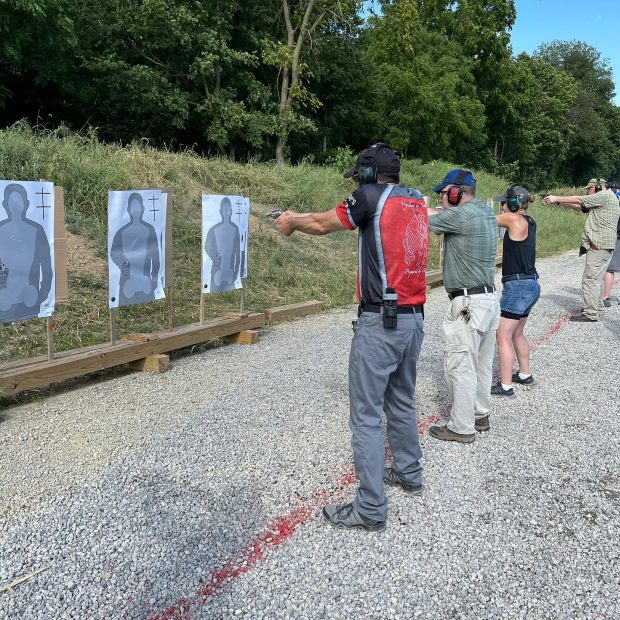 Students on the line

I had students in the class from Arizona, Illinois, Indiana, Ohio, Pennsylvania, Wisconsin, and Kentucky.  I thank all of them for contributing to a great class.  I look forward to teaching more revolver and shotgun classes into 2022.