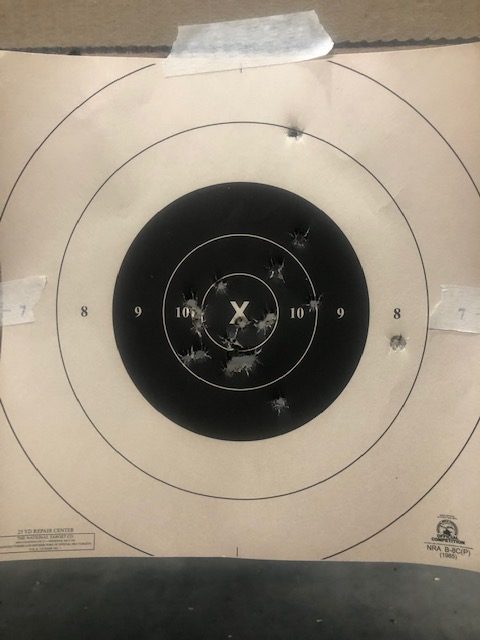 I got this one from the Rangemaster Instructor Course I attended last year.  It is also described as the “drill of the month” in Rangemaster’s December 2020 Newsletter (opens to PDF).

Here are the specifics:

Use a B-8 repair center, FBI-IP-1 bullseye, or the bullseye on an LTT-1 target, scored as printed. This drill is intended to be shot cold, from concealed carry.

– 5 yards Draw and fire 5 rounds in 5 seconds, using both hands.

– 5 yards Start gun in hand, at Ready, in dominant hand only. Fire 3 rounds in 3 seconds.

– 5 yards Start gun in hand, at Ready, in non-dominant hand only. Fire 2 rounds in 3 seconds.

– 7 yards Start gun in hand, loaded with 3 rounds only. Fire 3 rounds, conduct an empty gun reload, and fire 3 more rounds, all in 10 seconds.

With ammunition prices skyrocketing, many of you will like this drill because it consumes a relatively small amount of ammo.  The Baseline Assessment exercise covers a lot of handgun skill core competencies in just 20 rounds of live fire.   In fact, I don’t think I could honestly come up with a 20 round drill that covers so much ground.

In this time of ammunition shortages most people will be firing less ammunition on each range trip.  If you don’t want to spend a lot of money, but still want to log a quality practice session, this is a good drill to use.  In fact, I would postulate that the average person could maintain his/her basic proficiency if the only shooting he did was this drill two or three times a month.

I shot it a few weeks ago.  It’s designed to be shot cold.  I did it really cold.  This drill was the first thing I did to break a three-week time period without any shooting or dryfire practice.  I didn’t shoot as well as I would have liked to.  My high shot broke early during the weak hand only firing stage.  The other shot in the eight-ring was the first shot after my reload.

Both are very common mistakes that I shouldn’t be making.  It’s OK.  Now I know what I need to work on.  Future training sessions will devote more time to weak handed shooting and practicing getting an optimal grip after doing a reload.  I wouldn’t have learned anything if I shot the drill clean.